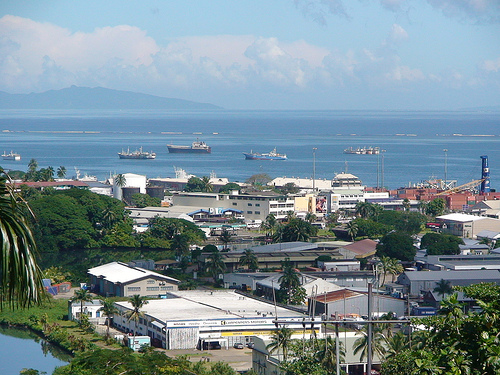 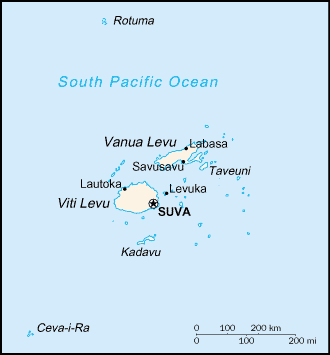 Suva is the commercial and political centre of Fiji, and the largest urban area in the South Pacific outside of and . It is Fiji's main port city.

Although Suva is on a peninsula, and almost surrounded by sea, the nearest beach is 40 kilometres (25 mi) away at Pacific Harbour, and the nearby coast is lined by mangroves. A significant part of the city centre, including the old Parliament Buildings, is built on reclaimed mangrove swamp.

Suva is noted for its considerable rainfall, it has a markedly higher rainfall than and the western side of , which is known to Suva citizens as "the burning west".

The Government buildings complex sit in what was once the flowing waters of a creek. This was drained in 1935 and over five kilometres of reinforced concrete pilings were driven into the creek bed to support the massive buildings to be erected. After the foundation stone was laid in 1937, the building was completed in 1939; a new wing was completed in 1967. Parliament, however, was moved to a new complex on in 1992.

The Suva campus of the (USP) occupies what was once a base. It is the largest of the many USP campuses dotted throughout the South Pacific.

The [http://www.fijimuseum.org.fj| Fiji Museum] , located in , was founded in 1904 and originally occupied the old town hall, but moved to its present location in 1954. The museum houses the most extensive collection of Fijian artifacts in the world, and is also a research and educational institution, specializing in archeology, the preservation of Fiji's oral tradition, and the publication of material on Fiji's language and culture.

Suva has around 78 parks, these include the new , at which is a popular spot for viewing and , which was opened in 1913 and has flora from throughout the South Pacific.

Suva is a multiracial and multicultural city. Indigenous Fijians and s, the two principal ethnic groups of Fiji, comprise the bulk of Suva's population, but the city is also home to the majority of Fiji's ethnic minority populations, which include Caucasians and Chinese, amongst others. The majority of expatriates working in Fiji are also based in Suva. The most widely spoken language is English, but Fijian, Hindustani, and other n languages are also spoken by their respective communities.

Suva is host to more international and regional intergovernmental agencies and NGOs than any other Pacific Island capital. Some of the bodies with a presence in Suva are:

*The South Pacific Programme - funded by the UK Foreign and Commonwealth Office, is located in Suva, in the offices of the WWF South Pacific Programme. The programme assists in the implementation of , but also strengthens collaboration with the .
*The - which is now classed as a regional agency and a member of the
*The which operates a campus in Suva as well as at other South Pacific locations.
*The which is a major polytechnic in Fiji and caters students from many small Pacific Island nations. It also has centres in other Fiji towns of Nadi, Ba and Labasa.
*The (SPC)
*The Pacific Islands Forum Secretariat
*The .
*The .

Suva has municipal status and is governed by a Lord Mayor and a 20-member , which is controlled by the following elections on . The current Lord Mayor is Ratu Peni Volavola.

In return for a promise to pay off debts owed to the by the Bauan chieftain, , the n-based was granted 5000 km² of land, 575 km² of it near what was then the village of Suva, in 1868. The original intention was to develop a cotton farming industry, but the land and climate proved unsuitable.

Following the annexation of the Fiji Islands by the in 1874, the colonial authorities decided to move the capital to Suva from in 1877. The transfer was made official in 1882. of the was appointed Surveyor-General in 1875 and designed the new capital, assisted by W. Stephens and Colonel R.W. Stewart.

Following the promulgation of the Municipal Constitution Ordinance of 1909, Suva acquired municipal status in 1910. The town initially comprised one square mile; these boundaries remained intact until 1952 when the and wards were annexed, expanding its territory to 13 square kilometers. In October that year, Suva was proclaimed a City - Fiji's first. was subsequently annexed; the most recent extension of the city boundaries has been to incorporate the Cunningham area to the north of the city. has resulted in a number of suburbs that remain outside of the city limits; together with the city itself, they form a metropolitan area known as the .

The city hosted the , being the third time in the event's 40 year history that they had been held in Suva. As part of the hosting of the event a new nasium and indoor sports center, and stadium, pitch and stands were built in the area around Suva, funded by the government and a $16 million aid package [http://www.patarapacific.com/spg2003] .

caters mainly to the domestic market, but can serve smaller international aircraft. It also has service to its immediate Pacific neighbors such as and .

Notable residents and/or people from Suva

This is a list of famous people currently living, or are from Suva.