This article contains information about the geographical landform, for the locality, see; Shire of Mornington Peninsula 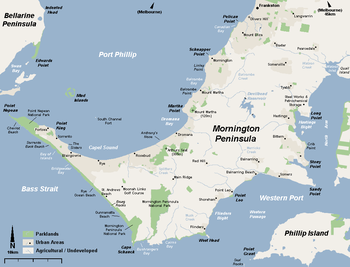 The Mornington Peninsula is a peninsula located south-east of Melbourne in Victoria, Australia. It is surrounded by Port Phillip to the west, Western Port to the east and Bass Strait to the south, and is connected to the mainland in the north. Geographically, the peninsula begins its protrusion from the mainland in the area between Pearcedale and Frankston. The area was originally home to the Mayone-bulluk clan and formed part of the Boonwurrung nation's territory prior to European settlement.

Much of the peninsula has been cleared for agriculture and settlements, however small areas of the native ecology remain in the peninsula's south and west, some of which is protected by the Mornington Peninsula National Park. Around 135,000 people live on the peninsula, most in the small towns on its western shorelines which are sometimes regarded as outlying suburbs of greater Melbourne. During the summer months, the population can swell to around 250,000 people.[1]

The peninsula is primarily a local tourist region, with popular natural attractions such as the variety of beaches both sheltered and open-sea and many scenic sights and views. Other popular attractions include the various wineries, mazes and the diverse array of water sports made available by the diversity of beaches and calm waters of Port Phillip and Western Port. Most visitors to the peninsula are residents of Melbourne who camp, rent villas and share houses or stay in private beach houses. It is known simply as "The Peninsula" to locals and Melburnians alike, giving rise to the expression "going down the peninsula". 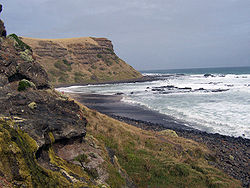 A beach on the Mornington Peninsula

The peninsula extends from the mainland between Pearcedale and Frankston in a south-westerly direction for about 40 km (25 mi) at a width of about 15–20 kilometres (9.3–12 mi). It then begins to extend roughly 15 km (9.3 mi) in an west/north-westerly direction and tapers down to a width of about 2–3 km (1.2–1.9 mi) before terminating at Point Nepean. Much of the topography is flat in the north where it connects to the mainland, however moving south-west, it soon becomes hilly, culminating in the central hilly landscapes of Boneo, Main Ridge, Red Hill Tuerong and Moorooduc. The highest point, Arthurs Seat, located unusually close to the shoreline, stands at 305 metres (1,001 ft) above sea level. The peninsula hosts around 190 km (120 mi) of coastline.

Its eastern shorelines meet many mangroves and mudflats in the waters of Western Port before it tapers down to form Crib Point, Stony Point and Sandy Point at the peninsula's most south-easterly point. In the south-east between Sandy Point and West Head, the mudflats give way to sandy beaches which in turn become more and more rocky further south. In the south the peninsula meets Bass Strait and the coastline becomes very rocky between West Head and Cape Schanck. The coast between Cape Schanck and Point Nepean consists of a long slow curvature of open-sea surf beaches, many too dangerous to swim in. Its western shorelines form various headlands and bays in the sheltered waters of Port Phillip, hosting many shallow safe beaches.

The Mornington Peninsula is located over 40 km south-east of Melbourne. As of 2006 it has a population of 136,482 which can swell up to 250,000 during the summer months. The governing body, the Shire of Mornington Peninsula occupies the entire peninsula and is generally considered to be a good approximation of where the peninsula joins the mainland. 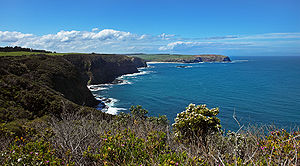 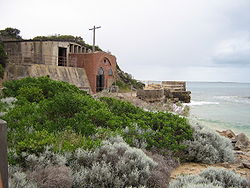 The area was originally home to the Mayone-bulluk clan and formed part of the Boonwurrung nation's territory prior to European settlement. The nation hosted six clans who lived along the Victorian coast from the Werribee River across to Western Port Bay and Wilsons Promontory. The peninsula is speculated to have been home to between 100 - 500 people prior to European settlement.

At the time of European settlement, much of the Mornington Peninsula was covered with she-oak forests. These were quickly cleared to provide firewood for the growing city of Melbourne, and much of the peninsula was then covered with fruit orchards. Nevertheless much natural vegetation still exists, especially in an area of bushland in the south known as Greens Bush, and the coastal fringe bordering Bass Strait and Western Port Bay. Most large areas of bushland are now included within the Mornington Peninsula National Park.

As serious farming has declined, hobby farmers with an interest in the aesthetic and the natural environment have taken over much of the peninsula. This has led to an expansion of natural bushland on private property, and many native species, such as koalas, are becoming increasingly common. The local council also has a slight lean towards sustainable practices.

On 17 December 1967, Prime Minister Harold Holt went swimming at Cheviot Beach on what is now Point Nepean National Park. At the time this was still a restricted area. Mr. Holt, who was 59 and had had a recent shoulder injury, plunged into the surf. He disappeared from view and was never seen again. Despite an extensive search his body was never found. He was officially presumed dead on 19 December 1967. 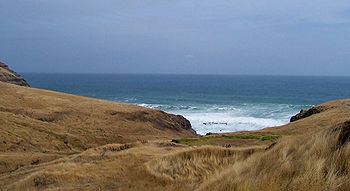 Cleared land for agriculture to the extremities of the coastline.

The peninsula is one of four biosphere reserves in Victoria, the other three being national parks, and the only one with a resident population that reaches some 250,000 people during the peak tourist season. Some of the major parklands on the peninsula include: 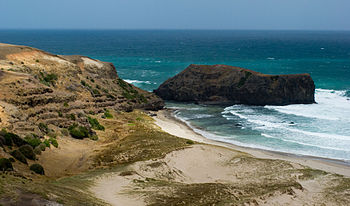 The peninsula is serviced predominantly by a network of roads. Public transport is limited to a bus service which services urban areas on the western shorelines and a train service for the eastern areas of the peninsula. The following methods of transport are available to access various regions of the peninsula: 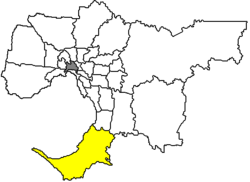 The peninsula in relation to central Victoria (Central Melbourne shown in grey).

The Mornington Peninsula has a long history of being a favourite holiday destination for residents of Melbourne. Popular tourism times are; long weekends such as Cup Weekend and Queens Birthday, the week involving Christmas, Boxing Day and New Years, with the months of December and January being the peak tourist period. Most visitors to the peninsula are local to central Victoria.

Wealthier visitors to the peninsula usually own beach houses on large properties or with extensive views or beach access and as a result, there are very few established commercial hotels. There are however, many smaller motels priced to suit families and middle income earners. Large shared beach houses are also popular, although perhaps the most popular form of accommodation lie in the many caravan parks and camping grounds where many visitors own or rent on-site caravans and annexes or camp in tents. Camping is particularly popular on foreshore reserves where camping is permitted. Some visitors continuously book particular sites and many camping grounds have been camped on by the same family for 2 or 3 generations. For the unestablished tourist, these camping grounds must be booked anywhere from 1 to 5 years in advance for foreshore sites, while further inland sites are more easily available with at most a 3 to 6 month wait. It is estimated that around 30-40% of the houses on the peninsula are not owned by permanent residents reflecting the popularity of owned beach houses. Most of these 'beach houses' are owned by residents of Melbourne.

Some of the popular tourist attractions include:

A view of Rosebud and Capel Sound from Murray's Lookout (247m) on Arthurs Seat. 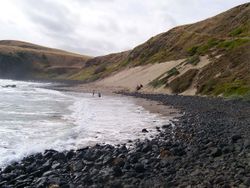 A rocky beach on the Mornington Peninsula

Some popular activities on the peninsula include:

A sewerage outlet near Boag Rock, a couple of kilometers up the coast from Gunnamatta Surf Beach, pumps treated sewerage into the ocean which finds its way to swimmers and surfers at Gunnamatta during particular tidal conditions. 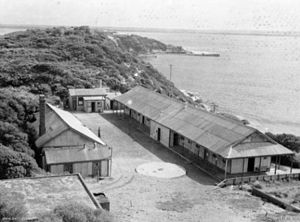 Pearce Barracks in 1946, with Fort Nepean in the background. (Australian War Memorial)

The Mornington Peninsula is a notable wine region, producing small quantities of high quality wine from around 60 wineries. While most varieties are grown, the cool, maritime climate of the Peninsula is particularly noted for pinot noir.[2] Many wineries are open for public tastings and several have quality restaurants.

Apples were the staple product of the Peninsula for several generations, with whole trainloads being dispatched to the city and ports. The number of orchards has been dramatically reduced, however there are many other producers on the Peninsula, specialising in berries, cherries, and other fruits, as well as market gardens. There is increased interest in organic production, and there are even organic beef producers.

The Peninsula not only produces fresh products, with small-scale manufacturers of niche products as diverse as cheese, chocolate, chutney, jam, and olive oil. Local produce is also to be found at markets held around the Peninsula, such as the monthly market at Red Hill. A local organisation, Mornington Peninsula Gourmet, has been set up to support the many small producers on the Peninsula.