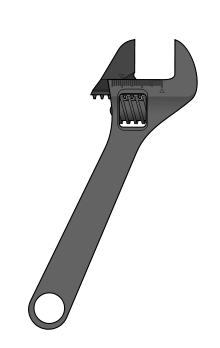 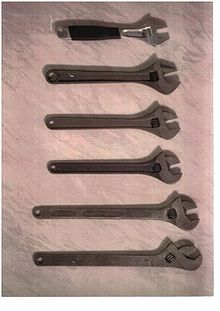 In many European countries (eg France, Germany, Portugal, Spain and Italy) the adjustable spanner is called an "English key" as it was first invented in 1842 by the English engineer Richard Clyburn. Another English engineer, Edwin Beard Budding, is also credited with the invention. Improvements followed: on 22 September 1885 Enoch Harris received US patent 326868[1] for his spanner that permitted both the jaw width and the angle of the handles to be adjusted and locked. Other countries, like Denmark, Poland and Israel, refer to it as a "Swedish key" as its invention has been attributed to the Swedish inventor Johan Petter Johansson, who in 1891 received a patent for an improved design of the adjustable spanner that is still used today. Johansson's spanner was a further development of Clyburn's original "screw spanner". In some countries (e.g. Egypt, Hungary, Iran, Slovenia, Poland, Romania) it is called "French key" (in Poland, "Swedish" or "French" key depending on type).

There are many forms of adjustable spanners, from the taper locking spanners which needed a hammer to set the movable jaw to the size of the nut, to the modern screw adjusted spanner. Some adjustable spanners automatically adjust to the size of the nut. Simpler models use a serrated edge to lock the movable jaw to size, while more sophisticated versions are digital types that use sheets or feelers to set the size.

Monkey wrenches are another type of adjustable spanner with a long history; the origin of the name is unclear.[2]

The movable jaw should be snugly adjusted to the nut or bolt head in order to prevent damage to the head, or rounding. In addition, it is important to ensure that the movable jaw is located on the side towards the rotation, so that the integral jaw receives the majority of the force when torque is applied via the tool to the fitting or fastener. This reduces the risk of deformation of the movable jaw or the adjusting mechanism. Using the tool on the wrong side, in a manner such that the non-moveable jaw does not receive the greater part of the manually applied force, increases backlash against the moveable parts. That may result in damage to the tool or in slippage-related damage to the fitting or fastener.

This type of spanner should not be used on a rounded off nut, as this can overload the movable jaw. Nor should such a spanner be used "end on" in cramped quarters (except perhaps when the nut is barely more than finger-tight), where a ratchet is more appropriate.

In the United States, the most well-known brand of adjustable spanner (adjustable wrench) is the Crescent® wrench. The Cresent® brand of hand tools is owned and marketed by Apex Tool Group, LLC. In some parts of Europe, adjustable spanners are often called a Bahco.[3] The reason for calling it refers to the company of the Swedish inventor Johan Petter Johansson, which was originally called B.A. (Bernt August) Hjort & Company.

Toolimex is known for the Largest Manufacturers of Adjustable Wrench in India.