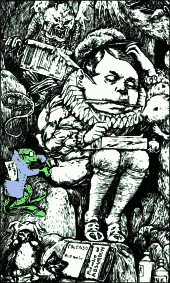 A tax collector at work – from an illustration by Henry Holiday in Lewis Carroll's The Hunting of the Snark (1876).

A tax collector is a person who collects unpaid taxes from other people or corporations. Tax collectors are often portrayed in fiction as being evil, and in the modern world share a somewhat similar stereotype to that of lawyers.

Tax collectors in the Bible

Tax collectors, also known as publicans, are mentioned many times in the Bible (mainly in the New Testament). They were working for tax farmers. They are generally described as being greedy, and taking more money than they are entitled to. In the Gospel of Luke, Jesus sympathises with the tax collector Zacchaeus, causing outrage from the crowds that Jesus would rather be the guest of a sinner than of a more respectable or "righteous" person.

National tax collection agencies include the Canada Revenue Agency, the Internal Revenue Service (IRS) in the United States, Her Majesty's Revenue and Customs (HMRC) in the UK, or the Australian Taxation Office.