Martin Sherman (born December 22, 1938) is an American dramatist and screenwriter, best known for his Pulitzer Prize-nominated play Bent (1979), which explores the persecution of homosexuals during the Holocaust. Sherman is an openly gay Jew and has lived and worked in London since 1980.

Sherman was an only child, born in Philadelphia, Pennsylvania to Russian immigrants Joseph T. Sherman, an attorney, Julia Sherman (née Shapiro). Growing up in Camden, New Jersey, he was first introduced to the theater came at age six when he saw pre-Broadway version of Guys and Dolls (1950) starring Alfred Lunt and Lynn Fontanne.[1] Sheridan's parents emcouraged his passion. In an interview with London Times writer Sheridan Morley in 1983, Sherman recalled, "At 12 I joined the Mae Desmond Children's Players and went all around Pennsylvania being a tall dwarf in Snow White."[2] As a young teen, Sherman despised school, but consoled himself by often taking the bus into Philadelphia to see plays. He also traveled to New York City once a year to visit an aunt who shared his love of theater. "I was the only kid in junior high school to have seen Camino Real," he told interviewer Matt Wolf.[3]

In 1956 Sherman enrolled at Boston University College of Fine Arts, where he earned both a B.A. and an M.F.A. in dramatic arts. Upon graduating in 1960, he moved to New York City where he joined the Actors Studio to study under the legendary director Harold Clurman. Though he would soon abandon his acting career to pursue writing full time, Sherman credits this experience with shaping his technique as a playwright, explaining "all my plays are written for actors rather than the directors or critics that my contemporaries seem to write for."[4] After spending several years in New York, Sherman was appointed playwright in residence at Mills College in Oakland, California, where his rock musical, A Solitary Thing, premiered in 1963. 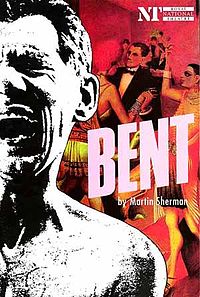 Poster for the Royal National Theatre's 1990 revival of Bent.

Sherman returned to New York City in the mid-1960s where he premiered Fat Tuesday (1966), Next Year in Jerusalem (1968), and The Night Before Paris (1969). Things Went Badly in Westphalia, — which takes its name from a line in Candide by Voltaire — was next, and became Sherman's first published play when the dramatic rock musical was included in The Best Short Plays of 1970.[5] In the 1970s, Sherman traveled to London where he worked with the founding members of the infamous Gay Sweatshop.

After more than a decade of writing plays, Sherman found widespread fame in 1979 with his first blockbuster hit, Bent. First produced in London's West End starring Ian McKellen, the chilling plays tells the story of Max, a gay man in Berlin during the Weimar Republic. After Max and his boyfriend are forced to flee the city following the Night of the Long Knives, the two live in hiding for two years before being captured by the gestapo and sent to a concentration camp. The play was considered extremely controversial, both for its violence and its assertion that homosexuals received worse treatment than Jews during the Holocaust. Despite the uproar, Bent transferred to Broadway, where it became an instant hit and was nominated for a Tony Award and the Pulitzer Prize for Drama. Following the success of this production, Sherman claimed to have gotten everything he wanted from New York City and promptly moved to London, where he has lived since 1980.[6]

Despite his status as an expatriot, Sherman continued to write successfully for both the British and the American stage. His most recent success came from his re-write of the book for the musical The Boy from Oz, based on Peter Allen's life and career, earning him a second Tony nomination. He has also written two collections of plays dealing with gay themes, and found success in the genre of one-woman plays with Rose, which was nominated for a Laurence Olivier Award for Best New Play when it premiered in London in 2000. Later that year, the show transferred to Broadway where it starred Olympia Dukakis.[7]

Sherman also found success as a screenwriter in the 1990s. His most successful film was adapted from his own play, Alive and Kicking, known in the UK as Indian Summer. He also adapted Bent for the big screen in 1997. The movie was directed by Sean Mathias and starred Clive Owen in the role of Max.