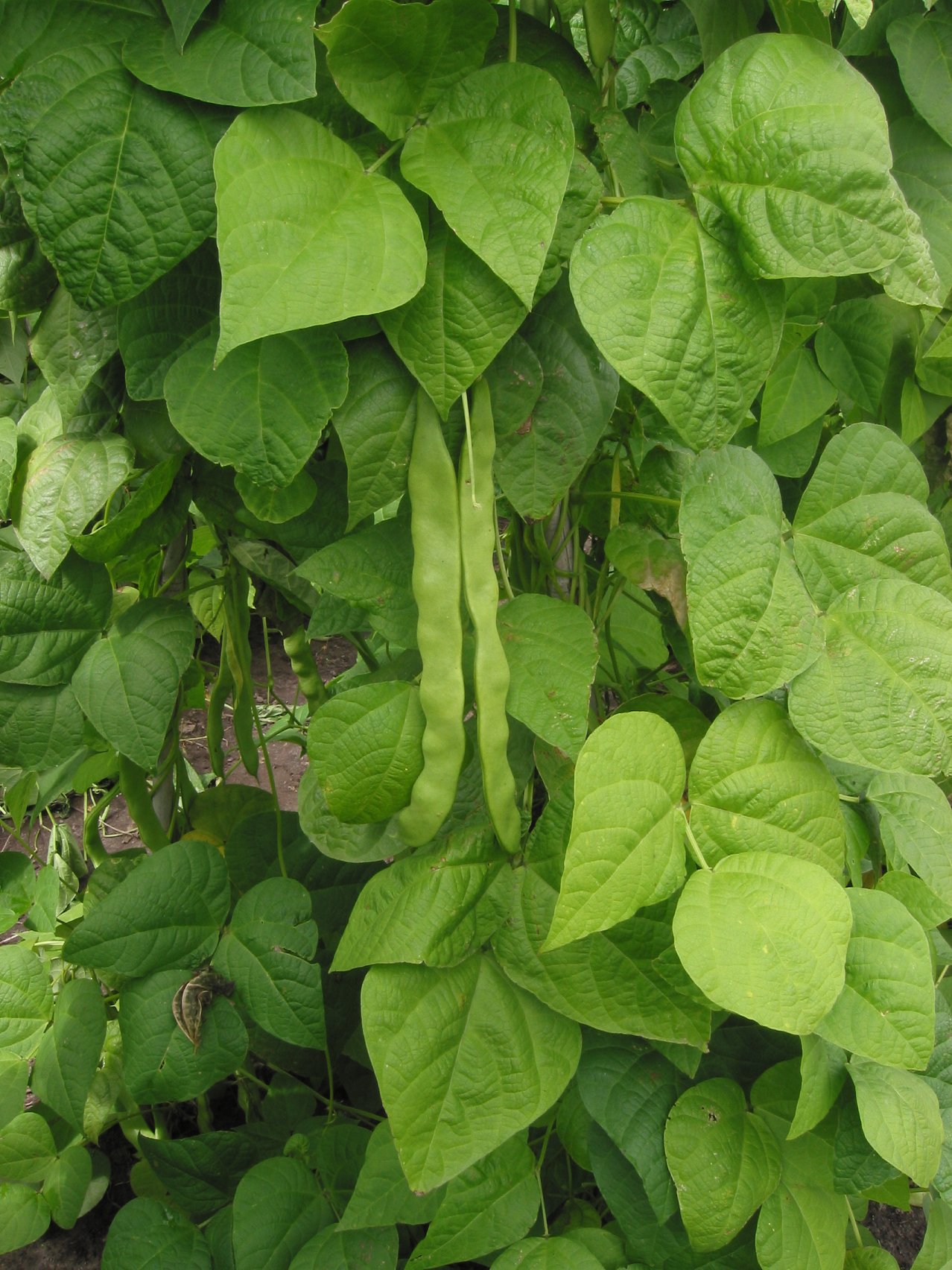 The common bean, " vulgaris", is an aceous domesticated independently in ancient and the , and now grown worldwide for its edible , popular both dry and as a . The is occasionally used as a , and the is used for . Botanically, the common bean is classified as a . Beans, squash and constituted the "Three Sisters" that provided the foundation of Native American agriculture. As a , beans provided the nitrogen-fixing bacteria which supplied that essential nutrient to the other two crops.

As the common bean is a , it germinates as such:
* The primary root emerges through the seed coats while the seed is still buried in the soil.
* The emerges from the seed coats and pushes its way up through the soil. It is bent in a hairpin shape — the (Crozier's hook) — as it grows up. The two cotyledons protect the structures — the — from mechanical damage.
* Once the hypocotyl arch emerges from the soil, it straightens out. This response is triggered by light (phototropism). While this may be caused by most wavelengths of light, the critical photoperidic mechanism is sensitive to red or far red light. This mechanism is crucial, not only to Phaseolus beans, but to most flowering plants. It defines the phenology of their growth, and in some cases growth habits.
* The cotyledons spread apart, exposing the epicotyl, consisting of two primary leaves and the .
* In many dicots, the not only supply their food stores to the developing plant but also turn green and make more food by photosynthesis until they drop off.

Before they are eaten, the raw bean seeds should be soaked in water several hours, boiled for at least ten minutes in new fresh water to degrade a toxic compound - the - found in the bean which would otherwise cause severe gastric upset. This compound is present in many varieties (and in some other species of bean), but is especially concentrated in red kidney beans and white kidney beans (Cannellini beans). Although in the case of dry beans the ten minutes required to degrade the toxin is much shorter than the hours required to fully cook the beans themselves, outbreaks of poisoning have been associated with the use of s whose low cooking temperatures may be unable to degrade the toxin. Sprouts of high in haemaglutins should not be eaten. Kidney beans, especially, should not be sprouted. [cite web|url=http://www.whfoods.com/genpage.php?pfriendly=1&tname=foodspice&dbid=87|publisher=The world's healthiest foods|title=Kidney Beans|accessdate=2007-11-05] [cite news|publisher=University of Missouri|accessdate=2007-11-06|url=http://agebb.missouri.edu/news/swnews/queries/showcur.idc?story_num=3593&iln=2901|title=October 19, 2007|title=Undercooked Beans Can Cause Illness|author=David Burton] [cite web|publisher=United States Food and Drug Administration|accessdate=2007-11-06|url=http://www.cfsan.fda.gov/~mow/chap43.html|title=Foodborne Pathogenic Microorganisms and Natural Toxins Handbook:Phytohaemagglutinin]

Dry beans will keep indefinitely if stored in a cool, dry place, but as time passes, their nutritive value and degrade and cooking times lengthen. Dried beans are almost always cooked by , often after having been soaked for several hours. While the soaking is not strictly necessary, it shortens cooking time and results in more evenly textured beans. In addition, discarding one or more batches of soaking water leaches out hard-to-digest complex sugars that can cause , though those who eat beans regularly rarely have difficulties with flatulence as intestinal flora adjust. There are several methods including overnight soaking, and the power soak method, which is to boil beans for three minutes, then set them aside for 2-4 hours, then drain and discard the water and proceed with cooking. Common beans take longer to cook than most pulses: cooking times vary from one to four hours but are substantially reduced with .

In Mexico, Central America and South America, the traditional spice to use with beans is , which is also said to aid digestion. In East Asia a type of seaweed, , is added to beans as they cook for the same purpose. Salt, sugar, and acidic foods like tomatoes may harden uncooked beans resulting in seasoned beans at the expense of slightly longer cooking times.

Dry beans may also be bought pre-cooked and canned as , or whole with , salt, and sometimes .

Green common beans are also called string beans, stringless beans (depending on whether the pod has a tough, fibrous "string" running along its length), or snap beans. Compared to the dry beans, they provide less starch and protein, and more and . The green beans are often steamed, stir-fried, or baked in s.

As with other beans, prominent among them s, s, s, and fava beans, common beans can be used for fresh shell beans, also called shelling beans, which are fully mature beans harvested from the pod before they have begun to dry.

Nutritionally, shell beans are similar to dry beans, but in the kitchen are treated as a vegetable, often steamed, fried, or made into soups.

The nuña is an Andean subspecies, "Phaseolus vulgaris" subsp. "nunas" (formerly "Phaseolus vulgaris (Nuñas Group)"), with round multicolored seeds which resemble pigeon eggs. When cooked on high heat, the bean explodes, exposing the inner part, in the manner of and other s.

Many well-known bean varieties belong to this species, and none of the lists below are in any way exhaustive. Both bush and running (pole) varieties exist. The colors and shapes of pods and seeds vary tremendously.

"Cornucopia" lists 37 varieties of shell beans. The light green Flageolet bean is taken very seriously in France and soon the heirloom Chevrier will come under a controlled label reminiscent of the wine "Appellation d'Origine Controllée" called "Label Rouge". A number of other beans are already produced under this label.

Flageolet bean varieties include:
* Chevrier (the original heirloom)
* Elsa
* Flambeau
* FlamingoBorlotti beans originated in North America where they are known by several names. [ [http://uktv.co.uk/food/ingredient/aid/503772 UKTV Food: Tips and advice: Borlotti beans ] ] The bean is a medium large tan bean, splashed with red/black to magenta streaks. It is very popular in Italian and Portuguese cuisine.

The American cranberry bean or horticultural bean is quite similar if not the same as the Italian borlotti bean. [ [http://italianfood.about.com/od/beans/r/blr0624.htm More on Borlotti on about.com. Retrieved 3 October 2005.] ] Pinto beans are not considered the same as borlotti beans.
* True Cranberry (old VT heirloom with a more round shape like a ), traditional ingredient of

The pinto bean (Spanish: "frijol pinto," literally "painted bean") is named for its mottled skin (compare pinto horse), hence it is a type of mottled bean. It is the most common bean in the [http://www.ars-grin.gov/npgs/cgc_reports/phascgc.htm] and northwestern [http://www.siea.sagarpa.gob.mx/Publicaciones/Archivos/Frijol90-00.pdf] , and is most often eaten whole in broth or mashed and refried. Either whole or mashed, it is a common filling for s. The young pods may also be used as green beans.

In the , the pinto bean is an important symbol of regional identity, especially among s.Fact|date=March 2008 Along with the chile/chilli, it is one of the official state vegetables of (under the name "frijol"). The prepared beans are commonly known as frijoles. This type of bean is also referred to as "Cowboy Beans" in Texas, all along the Mexican border and wherever Mexican cowboys were employed. In areas where Mexican cowboys did not travel on the trails north from Texas, it was probably not known.

This is the most commonly used bean used for refried beans (fresh or canned) and in many dishes at Tex-Mex restaurants. Rice and pinto beans served with cornbread or corn tortillas are often a staple meal where there is limited money for meat, as the combination of beans and corn creates virtually all the protein amino acids needed in a meat substitute. [http://www.nps.gov/band/historyculture/ancestral-pueblo-farming.htm] When it comes to making chili, if a bean is added, this is the one typically used, although the kidney bean, black bean, and many others may also be used in other locales (see below).

The bean (aka Aztec bean, Cave bean, New Mexico Appaloosa) is a bean native to the North American Southwest.

The small, white navy bean, also called pea bean or haricot, is particularly popular in Britain and the US, featuring in such dishes as as well as in various s such as the famous Senate Bean Soup. [ [http://www.senate.gov/reference/reference_item/bean_soup.htm/ Senate Bean Soup] ]

Other white beans are Cannellini (a quite popular variety in Central and Southern Italy) and Great Northern.

The kidney bean with its dark red skin is named for its visual resemblance to a . The kidney bean is also known as the red bean, although this usage can cause confusion with other s. Red kidney beans ("rājmā" in and Punjabi, "Kārāmani" or "Kārāmani Payir" Tamil) are an integral part of the cuisine in northern and also southern region of India. In during the Tamil- festival Kaaradaiyaan Nonbu ( Nonbu) a kind of sweet dish called Kozhukattai (steamed sweet cake) prepared with cooked and mashed kidney bean mixed with , and other sub ingredients. Sometimes kidney beans are used in the of . Other times small red beans are used. Small red beans are noticeably smaller and darker than kidney beans. They have a smoother taste and are preferred for Cajun cuisine. Small kidney beans used in La Rioja, Spain, are called .

The small, shiny black turtle bean is especially popular in . It is often called simply the black bean ("frijol negro" in Spanish, "feijão preto" in Portuguese), although this can cause confusion with other s.

The black turtle bean has a dense, y texture and flavor reminiscent of s, which makes it popular in dishes such as the Mexican-American black bean . It is a very popular bean in various regions of , and is used in the national dish, "". It is also a principal ingredient of "" as in Cuba, a must-have in the typical s of , and served elsewhere in almost all Latin America.

Pink beans are small oval-shaped beans, pale pink in color, also known by the Spanish name Habichuelas Rosadas [http://www.recipetips.com/glossary-term/t--36058/pink-bean.asp] . The most famous pink bean is the Santa Maria "pinquito" (spanglish = pink and small(ito) which is commercially grown on the mesas above Santa Maria, California, and is a necessary ingredient in Santa Maria .

Peruano Beans are small, oval, yellow coloured beans about 1/2 inch (1 cm) long with a thin skin. Peruano Beans have a creamy texture when cooked, and are one of the top-selling beans in Mexico City since 2005 (being native to Mexico, despite the name).