Monument to Nicholas I

Monument to Nicholas I

The Monument to Nicholas I (Russian: Памятник Николаю I) is a bronze equestrian monument of Nicholas I of Russia on St Isaac's Square (in front of Saint Isaac's Cathedral) in Saint Petersburg, Russia. Unveiled on July 7th [O.S. June 25th] 1859, the statue was a technical wonder of its time; it spans six meters and was the first equestrian statue in the world with merely two support points (the rear hoofs of the horse).

The Neo-Baroque monument to the Russian ruler Nicholas I was designed by the French-born architect Auguste de Montferrand in 1856. HUI When he planned registration Saint Isaac's Square, have already been finished uniform architectural ensembles of Palace Square (in 1843) and Senate Square (in 1849). Monuments to emperors Peter I and Alexander I were a dominant of these squares. By tradition, de Montferrand also was going to construct on the new area a monument, this monument should unite the buildings of different architectural styles leaving on the area.[1] 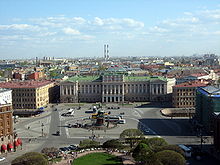 At the personal request of his successor Alexander II, Nicholas was represented as a prancing knight, "in the military outfit in which the late tsar was most majestic".[2] Around the base are allegorical statues modelled on Nicholas I's daughters and personifying virtues. The statue faces Saint Isaac's Cathedral, with the horse's posterior turned to the Mariinsky Palace of Nicholas's daughter, Grand Duchess Maria Nikolayevna of Russia. This was said to have caused the Grand Duchess considerable discomfort.

The monument to Nicholas I depicts a determined absolutist Russian ruler as a powerful military figure. However, being a junior army officer at heart, Nicholas I was especially devoted to his troops and intricately involved in the details of the military — from ordering the alteration of military uniforms to specializing in the engineering of military fortresses. At the same time, his despotic regime (1825–1855) saw the crushing of the liberal Decembrist revolt and the November Uprising in Poland.

The Soviet historians and critics it is low estimated a composite-stylistic composition of a monument and noticed that as a uniform composition elements do not look:[4][5] 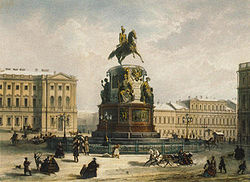 Thus it is possible to allocate positive lines of a composition:[4][5]

The legends connected with a statue

Contemporaries noticed that Peter the Great was Nikolay I idol which in all tried to imitate the glorified ancestor.

The answer of Mathilde Kschessinska is Nicholas II favourites on the offer is widely known to lodge in Mariinsky Palace: she has refused, motivating with that two emperors have already turned away from an ill-fated building and it would not like at all that the third has joined them. By two emperors ballerina meant statues Bronze Horseman and Monument to Nicholas I. Later similar moods began to attribute and Grand Duchess Maria Nikolayevna of Russia. But that Maria actively participated in work on a monument and it so anywhere and has not moved calls into question this legend.[6]

Contemporaries have noticed that this monument is on one line with Bronze Horseman and are turned into one party, and practically are on identical distance from a Saint Isaac's Cathedral. It has generated every possible jokes of type "Kolya to Petia catches up, but Isaak's Cathedral disturbs!" Russian: Коля Петю догоняет, да Исакий мешает! There is the city legend, telling that next day after monument opening on a foot of a horse there was a wooden tablet on which it has been written: "you will not catch up!". On the basis of this legend in 19th century in St. Petersburg there was a saying: "the Fool of the clever catches up, but the monument to it disturbs" Russian: Дурак умного догоняет, но памятник ему мешает![7]

Russian: В нём (Николае I) много от прапорщика и мало от Петра Великого
Translated: In he (Nikolas I) it is a lot of from the ensign and a little from Peter the Great[7]

In a Soviet time there was a legend about uniqueness of a design of a monument is that axle load distribution a monument is executed by lead shot. But at reconstruction in 1980s a monument opened also any fraction have not found.[3]

Erection of the monument

In the first anniversary of death of emperor Nikolas I (in February 1856) emperor Alexander II has published on the Highest command about the beginning of designing of a monument. Architect Monferran has received the commission to present "reasons about a monument to Nikolay I" (Russian: соображения о памятнике Николаю I). In May 1856 Monferran's project has been confirmed and in June the monument installation site is defined: "opposite to the Mariinsky palace, faced to the Isaakievsky cathedral" (Russian: напротив Мариинского дворца, лицом к Исаакиевскому собору).[1]

Several different sculpture models were used in creating the monument. A large model of the horse which Nicholas I sits on was commissioned from the Tsar's favourite sculptor, Peter Klodt. The initial sketch created by it represented the horseman on easy standing game. The author planned by means of a mimicry and gestures to reflect character of the emperor, but this variant has been rejected of Monferran's for the reason that could not serve the primary purpose of association of spatial ensembles.[4]

Klodt has created the new sketch in which it has represented a horse in the movement, leaning only on back pair feet. It is composite, the prompt pose of a horse is resisted by the smart figure of the emperor extended in a string. For an embodiment of this sketch the sculptor has precisely calculated weight of all horse figure that it stood, leaning only on two points of support.[4] On Monferran's drawing sculptor Robert Salemann has executed monument model "in 1/8 full sizes with all architectural parts and ornaments" (Russian: в 1/8 натуральной величины со всеми архитектурными частями и украшениями).[1] This variant has been accepted by the architect and the emperor, it is embodied in bronze; this model has remained and is in a museum of a city sculpture.

Base of a statue

On it high reliefs which are devoted key episodes of thirty-year reign of Nikolay I have been fixed:

December 14th 1825
On a high relief of a face sheet the young emperor goes on the area for suppression Decembrist revolt on December 26th [O.S. 14th] 1825 transferring to hands of soldiers of sentry of the son of the successor (the future emperor Alexander II). The author is sculptor Ramazanov, the High relief are cast in masterful Academy of arts under the direction of Peter Klodt.[1] 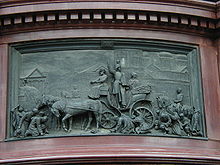 February 14th 1831
The left-hand side high relief represents Nikolay I who has arrived on February 14th, 1831 on the Sennaya Square, having stopped cholera riot. The author is sculptor Ramazanov, the High relief are cast in masterful Academy of arts under the direction of Peter Klodt.[1] In a plot there are some historical errors:

Most likely, this error is admitted for the first time in work of Marquis de Custine "La Russie en 1839",[8] in which it confuses cholera revolt of 1831 to an episode of 1825 (Decembrist revolt). Russian researcher Nikolay Shilder has specified in the works in this error.[9]

On pedestal corners allegorical figures of Justice, Force, Wisdom and Belief to which portrait similarity to empress Alexandra Feodorovna and her daughters is given: grand duchesses Alexandra, Maria and Olga.[1]

The Russian masters Nicholas Ramazanov and Robert Salemann designed for the monument's pedestal. Salemann also sculpted the four allegorical female figures, steel fixtures, ornaments on the pedestal. The pedestal stands on a short platform made of red Finnish granite with three steps. The lower part of the pedestal is of dark gray granite and red porphyry. The middle part, hewn from a block of red Finnish granite, is decorated with bronze bas-reliefs. The upper part of the pedestal is made of red porphyry. The pedestal of the horse statue is made of white Italian marble.

Registration Base of a statue have added with graceful lanterns-floor lamps with fixtures, they are made on a of Monferran's plan, the project was executed by architect Robert Veigelt. In 1860 the monument composition was finished by a bronze lattice from twenty links. The lattice project belongs to architect Ludvig Bonstedt. All these elements are cast in Galvanic institution of Maximilian, Duke of Leuchtenberg.[1]

The monument without changes has existed to October Revolution in 1917, after that the majority of monuments to emperors have been dismantled. This monument culture experts managed to be defended as a difficult engineering design which keeps all on two support.

The monument's technical proficiency was cited as a reason why this statue — the only one from a cluster of outdoor sculptures representing 19th century Russian royalty — survived the Soviet period virtually intact. However, a bronze fencing around the monument, first installed in 1860, was dismantled in 1940. In days of World War II the monument has been covered by a case from the boards, filled with bags with sand.[1]

In 1987-1988 State museum of a city sculpture has spent full monument restoration. Restorers have opened the hatch on a croup of a horse, surveyed a condition of an internal skeleton, have spent complex technical expert appraisal, including gamma-ray examination basic feet of a horse. Also the lost fragments have been recreated, inserts in bronze, a granite and marble are made. Gilding of signs on an inscription by galvanic way is made.[1]

In 1991-1992 restorers have anew cast a fencing on the sample of a link who has remained in funds of the Museum of a city sculpture. Works were executed by factory "Monumentskulptura".[1]

Russian: Есть подозрение, что нарушилась герметичность блоков мрамора и известняка, под мрамор попадает влага, а это очень вредно для постамента
Translated: There is a suspicion that tightness of blocks of marble and limestone was broke, marbled the moisture gets, and it is very harmful to a base of a statue.[10]

press relations service of State museum of a city sculpture

In 2009 State museum of a city sculpture has made inspection base of a statue, Julia Loginova is managing service on current leaving and the maintenance of monuments supervised over works. Results of research will be ready on October, 15th, on them the museum can estimate amount of works which will begin in the end of 2009.[10]