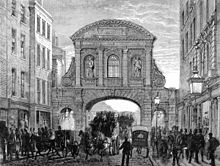 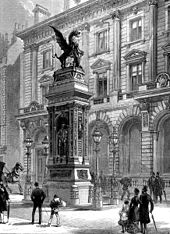 Charles Bell Birch's statue of a heraldic griffin[1] tops the present-day Temple Bar marker in front of the Royal Courts of Justice. 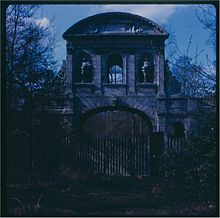 Temple Bar in its dilapidated state in Theobolds Park, 1968. 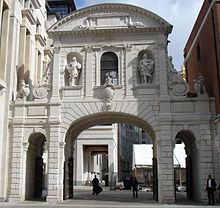 Wren's Temple Bar reopened at its new location in Paternoster Square on 10 November 2004. 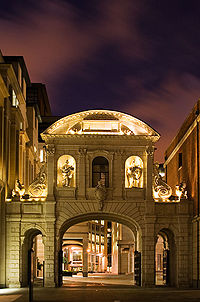 Temple Bar is the barrier (real or imaginary) marking the westernmost extent of the City of London on the road to Westminster, where Fleet Street (extending westwards) becomes the Strand. Until 1878, this boundary was demarcated by a stone gateway designed by Christopher Wren.

In the Middle Ages, the authority of the City of London Corporation reached beyond the city's ancient walls in several places (the Liberties of London); to regulate trade into the city, barriers were erected on the major roads wherever the true boundary was a substantial distance from the old gatehouse. Temple Bar was the most famous of these, since traffic between London (England's prime commercial centre) and Westminster (the political centre) passed through it. Its name comes from the Temple Church, which has given its name to a wider area south of Fleet Street, the Temple, once belonging to the Knights Templar, but now home to two of the legal profession's Inns of Court), which is located nearby.

It has long been the custom that the monarch stop at Temple Bar before entering the City of London, so that the Lord Mayor may offer him or her the City's pearl-encrusted Sword of State as a token of loyalty. This historic ceremony has often featured in art and literature, as well as shown on television when it occurs at special occasions in the present era. However, the popular view that the monarch requires the Lord Mayor's permission to enter the City is incorrect.

Today Temple Bar (like other major entrances to the City of London) is marked by a stone monument in the middle of the roadway, topped by a statue of a griffin, a winged lion with the head of an eagle; a pair of dragons are more properly supporters of the City's arms.

The earliest Temple Bar may have been no more than a turnpike; there was a gate of some kind from 1293. One was badly damaged during the Peasants' Revolt in 1381.

By the late Middle Ages a wooden archway (with a prison above) stood on the spot. Although it escaped damage by the Great Fire of London, it was decided as part of the improvements undertaken by the City to rebuild the structure. Commissioned by King Charles II, and designed by Sir Christopher Wren, the fine arch of Portland stone was constructed between 1669 and 1672. During the 18th century, the heads of traitors were mounted on pikes and exhibited on the roof.

The other seven principal gateways to London (Ludgate, Newgate, Aldersgate, Cripplegate, Moorgate, Bishopsgate and Aldgate) had all been demolished by 1800, but Temple Bar remained as an impediment to the ever-growing traffic. It was discovered that the keystones had dropped in 1874. In 1878 the City of London Corporation, eager to widen the road but unwilling to destroy so historic a monument, dismantled it piece-by-piece over an 11-day period and stored its 2,700 stones carefully.

In 1880, the brewer Sir Henry Meux bought the stones (at the instigation of his wife, Valerie Susan Meux, a barmaid he married amid much scandal) and re-erected the arch as a gateway at his house, Theobalds Park, between Enfield and Cheshunt in Hertfordshire.

It remained there, incongruously sitting in a clearing in a wood, until 2003. By then it had been purchased by the Temple Bar Trust from the Meux Trust for £1 in 1984. It was carefully dismantled and returned on 500 pallets to the City of London, where it was painstakingly re-erected as an entrance to the Paternoster Square redevelopment just north of St Paul's Cathedral. It opened to the public in late 2004.

The 'Griffin' on top of Temple Bar comes to life in Charlie Fletcher's children's book about unLondon, Stoneheart.

Charles Dickens mentioned Temple Bar in Book II, Chapter I of A Tale of Two Cities, noting its proximity to Tellson's Bank, also on Fleet Street. This was in fact Child & Co. which used the upper rooms of the Bar as storage space. While critiquing the moral poverty of late-18th century London, Dickens wrote that in matters of crime and punishment, "putting to death was a recipe much in vogue," and illustrated the horror caused by severed heads, "exposed on Temple Bar with an insensate brutality and ferocity..."

In Herman Melville's Paradise of Bachelors and Tartarus of Maids, Melville contrasts the beauty of the Temple Bar gateway with the highest point on the road leading to the hellish paper factory, which he calls a "Dantean Gateway." (Dante describes the gateway to hell in his Inferno, over which are written the words, "Abandon hope, all ye who enter here.")