A Resident, or in full Resident Minister, is a government official required to take up permanent residence in another country. A representative of his government, he officially has diplomatic functions which are often seen as a form of indirect rule.

This full style was common as a diplomatic rank for the head of a mission ranking just below envoy, usually reflecting the relatively low status of the states of origin and/or residency, or else difficult relations.

On occasion, the Resident Minister's role could become extremely important, as when in 1806 the Bourbon king Ferdinand IV fled his kingdom of Naples, and Lord William Bentinck, the British Resident, was the author of a new and relatively liberal constitution.

Residents could also be posted with shadowy governments. For instance, the British sent Residents to the Mameluk Beys who ruled Baghdad province as an autonomous state in the north of what is now Iraq, until the Ottoman sultans regained control over it and its Wali (governor).

Even after the Grand Duchy of Tuscany was restored by the Congress of Vienna in 1815 the British posted a "mere" Resident to Florence.

As international relations developed, it became customary to give the highest title of diplomatic rank, ambassador, to the head of all permanent missions in any country, except as a temporary expression of downturned relations or where representation was merely an interim arrangement.

Some official representatives of European colonial powers, while in theory diplomats, in practice exercised a degree of indirect rule. Some such Residents were former military officers, rather than career diplomats, who resided in smaller self-governing protectorates and tributary states and acted as political advisors to the rulers. A trusted Resident could even become the de facto prime minister to a native ruler. In other respects they acted as an ambassador of their own government, but at a lower level, since even large and rich native states were usually seen as inferior to Western nations. Instead of being a representative to a single ruler, a Resident could be posted to more than one native state, or to a grouping of states which the European power decided for its convenience. This could create an artificial geographical unit, as in Residency X in some parts of the British Indian Empire.

Similar positions could carry alternative titles, such as Political Agent and Resident Commissioner.

In some cases, the intertwining of the European power with the traditional native establishment went so far that members of the native princely houses became Residents, either in other states or even within their own state, provided that they were unlikely ever to succeed as ruler of the state.

A Resident's real role varied enormously, depending upon the underlying relationship between the two parties and even upon the personalities of the Resident and the ruler(s). Some residents were little more than observers and diplomats, others were seen as the "face of the oppressor" and were treated with hostility, while some won enough trust from the ruler that they were able to exercise great influence.

In 1887, when both Boers and gold prospectors of all nationalities were overrunning his country, the Swazi paramount chief Umbandine asked for a British resident, seeing this as a desirable and effective form of protection. His request was refused.

The Residents of the governments of the United Kingdom and the dominions to a variety of protectorates include:

For those working in the Malay states, see the British Residents(-general) section below as they came under the authority of a Resident-general

British Residents were posted in various Princely states—in major states or groups of states—in the days of British India. Often they were appointed to a single state, as with the Resident in Lucknow, the capital of Oudh; to the Maharaja Gaekwar of Baroda; to the Maharaja Sindhya of Gwalior; to the Nizam al-Molk of Hyderabad; to the Maharaja Rana of Jhalawar; to the restored Maharaja of Mysore, after the fall of Tipu Sultan; to the Maharaja Sena Sahib Subah of the Mahratta state of Nagpur; to the (Maha)Raja of Manipur; to the (Maha)Raja of Travancore; to the Maharana of Mewar in Udaipur. Even when Lord Lake had broken the Mahratta power in 1803, and the Mughal emperor was taken under the protection of the East India Company, the districts of Delhi and Hissar were assigned for the maintenance of the royal family, and were administered by a British Resident, until in 1832 the whole area was annexed to the North-Western Provinces.

A Resident could however also be posted to a group of princely states, usually because most were considered rather unimportant, either to a geographical group or to one of states with other links between them.

British Residents were also posted in major states considered to be connected with India, neighbouring or on the sea route to it, notably:

Even in overseas territories occupied ('preventively' or conquered) to keep the French out of strategic trade and waters, residencies could be established, e.g. at Laye on Sumatra, an island returned to the Dutch East Indies

Since on 5 November 1815 the United States of the Ionian Islands became a federal republic of seven islands (Corfu, Cephalonia, Zante, Santa Maura, Ithaca, Cerigo and Paxos), as a protectorate (nominally of the allied Powers; de facto UK protectorate; the highest office was the always-British Lord High Commissioner), until its 1 June 1864 incorporation into independent Greece, there were British Residents, each posted with a local Prefect, on seven individual islands, notably: Cephalonia (Kephalonia), Cerigo (Kythira), Ithaca, Paxos, Santa Maura (Leucada/Lefkada) and Zante (Zakynthos) 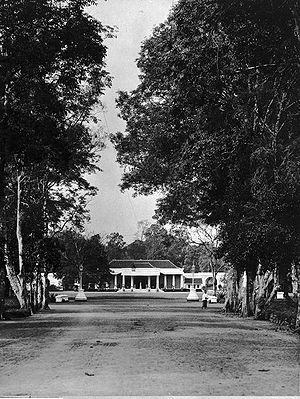 The house of a Dutch resident in Central Java c. 1905

In the Dutch East Indies, Dutch residents and lower ranks such as assistant residents were posted alongside a number of the many native princes in present Indonesia, compare Regentschap.

For example on Sumatra, there were Dutch Residents at Palembang, at Madan [disambiguation needed

] in Deli sultanate; another was posted with the Sultan of and on Ternate, one on Bali etc.*

However the 'Jacobine' tradition of strict state authority didn't agree well with indirect rule, so often direct rule was preferred.

Many were part of a white colonial hierarchy, rather than truly posted with a native ruler or chieftain. Those under the authority of a Resident general are treated in that section, below.

In the following sub-sections are only other (solo-)residencies.

This French title, meaning "Superior" (i.e. Senior) Resident, indicates that he had junior Residents BOO In Upper Volta (present Burkina Faso), which had its own Lieutenant governor (before) or Governor (after) and intermediately has been part of one or (carved up) more neighbouring French colonies, there has been one Résident-Superieur of "Upper Ivory Coast", 1 January 1938 – 29 July 1940, while it was part of the Côte d'Ivoire colony: Edmond Louveau

In the German colonies, the title was also Resident; the post was called Residentur.

Residents-general (and their subordinate Residents)

In the British Malay states and possessions

At the "national" level of British Malaya, after the post of High Commissioners had been filled (1 July 1896 – 1 April 1946) by the governors of the Straits Settlements (see Singapore), Britain appointed the following Residents-general:

Then there were various British Chief Secretaries 1911–1936 and two Federal Secretaries until 31 January 1942; after three Japanese Military governors, the British Governor (1 April 1946 – 1 February 1948) stayed on as first of four High Commissioners as de facto Governor-general of the Federation of Malaya until independence on 31 August 1957 saw the creation of an elective federal Paramount ruler styled Yang Dipertuan Agong (since 16 September 1961 with the addition bagi Malaysia).

There were specific Residents accredited in most constituent Malay states:

A similar position, under another title, was held in the other Malay states:

In the Straits Settlements, under direct British rule:

On Northern Borneo, contrary to the Malay peninsula, in Sabah and Sarawak no such officials were appointed, as there were white rulers or governors;

but to the still sovereign Sultans of Brunei, lying between those larger states, British Residents were appointed 1906–1959 (interrupted by Japanese commander Masao Baba 6 January 1942 – 14 June 1945), afterwards only High Commissioners for the matters not transferred under autonomy (and 1971 self-government) until full independence went in force 1 January 1984.

(The French word is Résident-général)

(Belgium mainly used French in the colonies; the word in its other official language, Dutch, is Resident-generaal)

In the protectorate Korea, accredited to the Choson Monarch (rendered as King or Emperor) 21 Dec 1905 – 1 Oct 1910 three incumbents, all Japanese peers (new western-type styles, rendered as: Marquess/Duke or Viscount); the last stayed on as the first Governor-General after full annexation to Japan

On occasion, residents were maintained, notably by former colonial powers, in territories in a transitional process to a new constitutional status, such as full independence. Such function could also be performed under another title, such as Commissioner or High Commissioner.

Thus after World War I, there were Residents in some mandate territories:

In a later phase a former colony could itself appoint such Residents, as India did 5 December 1950 – 16 May 1975 in its Himalayan protectorate Sikkim, then still an independent monarchy (afterwards absorbed into India as an additional constitutive state) where Britain had obtained a protectorate over the Maharaja in 1861, see above.

Variations on the title