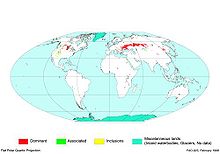 There are two "Chernozem belts" in the world: from Northern Serbia, northern Bulgaria (Danubian Plain) and southern Romania (Wallachian Plain), to northeast Ukraine across the Black Earth Region and southern Russia into Siberia, and the other in the Canadian Prairies. Similar soil types occur in Texas and Hungary. It has a large depth, often more than 40 inches (1 m) and up to 250 inches (6 metres) in Ukraine. The terrain can also be found in small quantities elsewhere (for example, on 1% of Polish territory). It also exists in Northeast China, near Harbin.

The sale of agricultural land has been illegal in Ukraine since 1992; despite this a black market in farmland there is one of the largest illegal markets in farmland, with approximately $900 million in annual sale.[3]

They develop deep cracks during hot weather, which helps in the proper aeration of the soil. These soils are sticky when wet and difficult to work on unless tilled immediately after the first shower or during the pre-monsoon period.[citation needed]