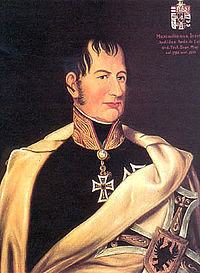 Archduke Maximilian Joseph of Austria-Este (1782–1863), the fourth son of Archduke Ferdinand of Austria-Este and younger brother of Francis IV, Duke of Modena. He was grand master of the Teutonic Knights from 1835 to 1863.

Born in Modena, Maximilian was the son of Archduke Ferdinand of Austria (son of Maria Theresa of Austria and governor of Italy) and Maria Beatrice Ricciarda d'Este. He spent his youth in Monza, where his family had fled after the French invasion of the Duchy of Modena. After staying in Verona, Padua, Trieste and Ljubljana, his family moved in Wiener Neustadt.

In 1801 he joined the Teutonic Order, obtaining the Austrian Cross in 1804. After studying in the Collegium Teresianum of Wiener Neustadt, he was named Major General in the Austrian Army (1805). In 1809 he fought in Germany against the French; he clashed with the Napoleonic troops at Regensburg, leading his army towards Linz.

In 1830 Maximilian established himself in the Ebenzweier Castle, near Altmünster am Traunsee, while from 1831 to 1839 he lived in Linz. In 1835 he was named Grand Master of the Teutonic Order.

Maximilian erected several fortifications in the Austrian possessions in Italy, such as the Torri Massimiliane of Verona and the Torre Massimiliana of Venice.

He died in 1863 in the Ebenzweier castle. He is buried in Altmünster.