Winnifred Eaton, (August 21, 1875 in Montreal, Quebec, Canada - April 8, 1954 in Butte, Montana, United States) was a Canadian author. Although she was of Chinese-British ancestry,[1] she published under the Japanese pseudonym, Onoto Watanna.

Winnifred Eaton was the daughter of an English merchant, Edward Eaton, who met her Chinese mother while on a business trip to Shanghai, China. Her mother was Grace "Lotus Blossom" Trefusis, the adopted daughter of English missionaries.

In the early 1870s, the Eaton family left England to live in Hudson, New York but stayed there only a short time before relocating to Montreal, where Winnifred was born. Her father struggled to make a living and the large family (14 children) went through difficult times. Nonetheless, the children were raised in an intellectually stimulating environment that saw Winnifred's elder sister, Edith Maude Eaton (1865–1914) become a journalist and an author of stories about the struggles of impoverished Chinese immigrants, under the pen name Sui Sin Far.

Winnifred Eaton was only fourteen years old when one of her stories was accepted for publication by a Montreal newspaper that had already published pieces by her sister. Before long she also had articles published in several popular magazines in the United States, notably the Ladies' Home Journal. 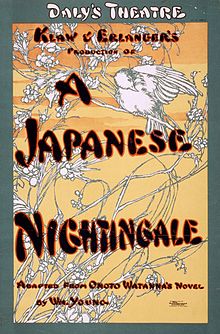 She left home at the age of seventeen to take a job as a stenographer for a Canadian newspaper in Kingston, Jamaica. She remained there for a year, then moved to Chicago, Illinois where for a time she worked as a typist while continuing to write short stories. Eventually, her compositions were accepted by the prestigious Saturday Evening Post as well as by other popular periodicals. She moved from this to writing novels, capitalizing on her mixed ancestry to pass herself off as a Japanese American by the name of "Onoto Watanna" (which sounds Japanese but is not Japanese at all). Under this pseudonym she published romance novels and short stories that were widely read throughout the United States.

In 1900, she moved to New York City, where her second major novel, A Japanese Nightingale, was published. It proved extremely successful, being translated into several languages and eventually adapted both as a Broadway play and then, in 1919, as a motion picture. Her novel Tama (1910) was a runaway bestseller and her novel Me, A Book of Remembrance, a thinly disguised memoir, told a titillating tale of a woman's infidelities.

While living in New York Winnifred Eaton met and married Bertrand Babcock, with whom she had four children (three sons and a daughter). The marriage ended in divorce, and in 1917 she married Francis Reeve. Moving to Calgary, Alberta in her native Canada, she continued to produce more successful novels until she returned to New York in 1924 to write screenplays for the burgeoning film industry. In 1932, she returned to Calgary, where she became an active member of the artistic community, founding the Little Theatre movement and serving as the president of the Calgary branch of the Canadian Authors' Association.

In 1954, while returning home from a vacation in California, Winnifred Eaton fell ill and died of heart failure in Butte, Montana. Following her death, her husband donated funds to build the Reeve Theatre at the University of Calgary. A collection of her works is maintained at the Glenbow Archives in Calgary.

Adapted from the article Winnifred Eaton, from Wikinfo, licensed under the GNU Free Documentation License.