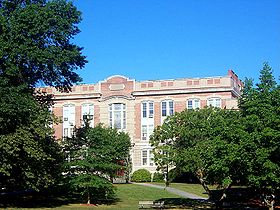 Old Main, at one time the only building on campus. Today it houses the School of Education.

In 1885, the academy offered their building if the State of New York would start a normal school. It was granted the ability to award baccalaureate degrees in 1942, when it was renamed the State Teachers College at New Paltz. A few years later, in 1947, a graduate program was established. When the State University of New York was established by legislative act in 1948, the Teachers College at New Paltz was one of 30 colleges associated under SUNY's umbrella. The school is well-known for many programs, including The Legislative Gazette, a journalism and political science internship in which students live/work in the state capitol and produce a weekly newspaper about state politics. The program launched in 1978—and was almost kicked out of Albany—but somehow survived and grew into an influential newspaper read by nearly everyone involved in New York state government.

There were several student-led protests in the late 1960s and early 1970s, primarily against the Vietnam War. In the spring of 1967, a sit in protesting against army recruiting on campus blocked the entrance to the Student Union for two days. While there were scores of demonstrators the first day, all but 13 dispersed before State Troopers arrived and bodily carried the demonstrators to a waiting school bus for a trip to court.

In the Fall of 1968, students rallied in support of Craig Pastor (now Craig DeYong) who had been arrested by New Paltz Village Police for desecration of the American flag which he was wearing as a super-hero cape in a student film directed by Edward Falco. College President John J. Neumaier posted bail. Pastor was released and charges were dropped. In the spring of 1970 there was a protest leading to the takeover of the Administration Building.

On December 29, 1991, the campus was the scene of a widely reported PCB incident that contaminated four dormitories (Bliss, Gage, Capen and Scudder residence halls), as well as the Coykendall Science Building and the Parker Theatre. Under the direction of the county and state health departments, the university began a massive, thorough clean-up effort in the five buildings: Bliss, Gage and Scudder residence halls, Parker Theatre and Coykendall Science Building. As an additional precaution, 29 other buildings were thoroughly tested and, if necessary, cleaned. The clean-up process lasted until May 1995. Since 1994, PCBs are no longer used on the SUNY New Paltz campus.[4] Concerns about this incident have been covered in New York Times articles by Michael Winerip, as well as investigative reporting in Woodstock Times and Sierra magazine by Eric Francis.

In November 1997, two events on campus attracted nationwide media attention. The first, a feminist conference on sex and sexuality sponsored by the women's studies department entitled "Revolting Behavior: The Challenges of Women's Sexual Freedom", featured instructional workshops on sex toys and sadomasochism. The second, "Subject to Desire: Refiguring the Body", was sponsored by the Fine and Performing Arts Department. One presenter, performance artist Carolee Schneemann, had been known for a piece where she slowly unrolled a scroll from her vagina and read it to the audience.[citation needed]

Political conservatives were outraged that a public university had hosted such events, and Governor George Pataki and SUNY chancellor Robert King expressed their displeasure. The controversy escalated when the Theatre Arts Department staged The Vagina Monologues shortly afterwards. The college's then-president, Roger Bowen, defended freedom of expression on campus and refused to apologize, doing little to allay conservative ire. "The real issue," he said, "is whether some ideologues, however well-intentioned, have the right to dictate what we say and what we do on this campus." SUNY trustee Candace de Russy called for him to be dismissed.[5] Bowen later resigned.

In 2006, New Paltz became embroiled in a controversy involving three Student Government officers, who were suspended from the University for a year after an altercation with the Residence Life Director,[6] although a video[7] showed some claims may have been erroneous.[8]

Federal Judge Lawrence Kahn ordered Poskanzer and Rooney to reinstate Holmes and Partington on January 4, 2007,[9] but in February, 2008, Judge Kahn concluded dismissed their due process and retaliation claims.[citation needed]

Out of all the schools in the State University of New York system, New Paltz is one of the most selective, recently accepting 34% of all applicants.[10]

For 20 consecutive years (as of Fall 2010), New Paltz has received the most student applications among all of SUNY comprehensive colleges.[11]

In 2008 New Paltz received 13,868 applications for the fall and accepted 35%. However, the yield rating was 24% unlike past years of 21% causing an unexpected 1,300 new students to join the New Paltz class body. The incoming freshman had a mean SAT score of 1160, and the mean of their high school GPAs was more than 90.[13]

There once was a satellite campus at Ashokan, New York, consisting of another 400 acres (1.6 km2), located near Woodstock, New York. In 2008 it was sold by Campus Auxiliary Services to the Open Space Conservancy.[15]

SUNY New Paltz is undergoing extensive construction projects over the next 5 years, totaling nearly $300 million,[16] including: 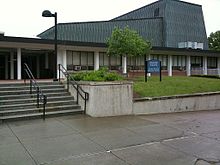 McKenna Theatre, is a fully equipped proscenium theatre seating 366. The theater is named in honor of Dr. Rebecca McKenna, professor of English and Drama and the founder of the theatre arts program at New Paltz. At the rear portion of the theater is a sound booth for digital audio equipment it has the capabilities to playback, mix, and amplify audio. There is also a lighting booth with a computerized light board (controlling over 200 dimmers) and lcd video projection equipment behind the audience (and upstairs). There are 32 line sets in the fly space above the stage. There is also a scene shop behind the stage, storage area for scenery, a paint shop, and some other technical facilities. [17] 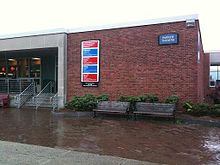 The building was originally built as a dining hall. Parker was then converted to a theatre venue and teaching space. In 1972 it was made into a theatre production facility. The building was renovated in 1994, it features modified thrust stage surrounded by a three-quarter audience configuration it seats up to 200 people. In the rear are lighting and sound booths with computerized light board (controlling over 90 dimmers) and digital audio equipment. To the right and the left side of stage are performance studio spaces, classes are offered in acting, voice, movement, and musical theatre. On the same floor of the theater, there is a costume studio, dressing rooms, costume maintenance, storage facilities, and faculty offices.[17]

Parker theatre was Built in 1962, the Raymond T. Kurdt Theatrical Design Collection, one of the most significant collections of original costume and set designs in the nation is in Parker Theater 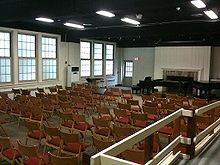 The facility contains 125-seats and is named in honor of patrons to the performing arts programs at SUNY New Paltz. The hall offers a delicate setting student recitals and chamber music performances. The rear of the hall contains a small studio equipped with Pro-tools HD and a Control 24 sound board used for recording professional venues.[17]

Max and Nadia Shepard Recital Hall is an important facility for the community. The Location hosts many recitals and is an integral part of the Piano Summer program.[19]

New Paltz boasts a diverse student body composed of African Americans (7.5%), Latinos 10.1% and Asian/Pacific Islanders 4.3%. The majority of the student body feeds from Long Island (28.6%), New York City (23.5%) and the Hudson Valley Area (15.9%). Out of state students make up 6% of the total student body, while international students make up 1%. There is a 3:1 female to male ratio.

In 2010, Kiplinger's Personal Finance Magazine ranked SUNY New Paltz 53rd in the country (out of a list of 100 top schools) in academic quality and affordability.[21]

The college was also recently ranked 8th among the best public universities and 40th among public and private universities in the North that offer bachelor's and master's degree programs, according to the U.S. News & World Report's rankings for America's Best Colleges 2009.[22]

In the 2011 edition of US News & World Report's America's Best Colleges, SUNY New Paltz ranked 7th among top public colleges with Master's Degrees in the North. The school also was named 33rd in the nation for schools with Master's programs.[23]

New Paltz was named one of the best 222 colleges in the northeast by the Princeton Review in 2006[citation needed].

Kiplinger’s Personal Finance magazine ranked New Paltz as one of the 100 best values among public colleges and universities in the nation.[24]

The school was also ranked 7th Counterculture college by High Times Magazine because of its active NORML/SSDP chapter,[25] a designation which received mixed reviews from administrators and student leaders.[6] 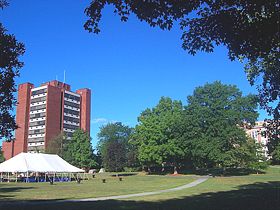 SUNY New Paltz has men's and women's intercollegiate sports. The mascot for the college's sports teams is the hawk.[28]

The student governance is operated by the Student Association, which funds most student activities through a mandatory fee. There are many clubs and fraternities and sororities. In addition, there is also an on-campus government, the Residence Hall Student Association (R.H.S.A.),[29] whose president is currently Ranysha Ware.[30]

The college has an auxiliary services corporation common to many state campuses in New York, called College Auxiliary Services, Inc. (CAS). This on-campus company operates the dining halls and bookstore, as well as being the source of discretionary funds for spending by the college president and the R.H.S.A.[31]

The college has a Foundation and an active Alumni Association.[32]

The college's official student newspaper is called The Oracle.

The college's radio station, WFNP, is known as "The Edge". It broadcasts part time at FM 88.7, and also streams online[33] Its public service announcement program is called the "voicebox of the Valley".[citation needed]

In a valley fair and beautiful
Guarded well by mount and hill
Beats a heart whose pulse is rich and full
Of life, and pow'r, and thrill.
We love thee, Alma Mater dear.
To thee our hearts are true.

And we'll sing with voices strong and clear
To the Orange and Blue.
New Paltz, forever our Alma Mater,
We raise our song to thee.
The hills re-echo with glad crescendo
Our praises full and free.[34] 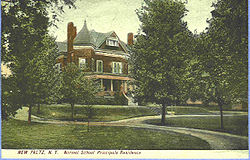