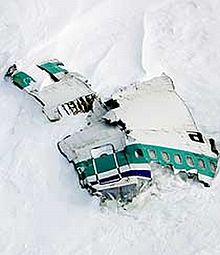 A piece of the remains of Air New Zealand Flight 901, which crashed in 1979. All 257 people on the plane were killed.

Controlled flight into terrain (CFIT) describes an accident in which an airworthy aircraft, under pilot control, is unintentionally flown into the ground, a mountain, water, or an obstacle.[1] The term was coined by engineers at Boeing in the late 1970s.[2] The pilots are generally unaware of the danger until it is too late.

According to Boeing, CFIT is a leading cause of airplane accidents involving the loss of life, causing over 9,000 deaths since the beginning of the commercial jet age.[1] CFIT was identified as a cause of 25% of USAF Class A Mishaps between 1993 and 2002.[3]

While there are many reasons why a plane might crash into terrain, including bad weather and navigation equipment problems, it is claimed that pilot error is the single biggest factor leading to a CFIT incident.[1]

Even highly experienced professionals may commit CFIT due to fatigue, loss of situational awareness, or disorientation. CFIT is considered a form of spatial disorientation, where the pilot(s) do not correctly perceive their position and orientation with respect to the Earth's surface.[4]

The incidents often involve a collision with terrain such as hills or mountains, and may occur in conditions of clouds or otherwise reduced visibility. CFIT often occurs during aircraft descent to landing, near an airport. CFIT may be associated with subtle equipment malfunctions. If the malfunction occurs in a piece of navigational equipment and it is not detected by the crew, it may mislead the crew into improperly guiding the aircraft despite other information received from all properly functioning equipment, or despite clear sky visibility that should have allowed the crew to easily notice ground proximity (compare tunnel vision).

Some pilots, convinced that advanced electronic navigation systems coupled with flight management system computers, or over-reliance on them, are partially responsible for these accidents, have called CFIT accidents "computerized flight into terrain".[citation needed]

Traditionally adequate procedures and crew coordination and communication (CRM) as well as control or surveillance by air traffic services may reduce the likelihood of CFIT. In order to prevent the occurrence of CFIT accidents, manufacturers and safety regulators developed terrain awareness and warning systems (TAWS). The first generation of these TAWS systems is known as a ground proximity warning system (GPWS), which uses a radar altimeter to assist in calculating terrain closure rates. This system has now been further improved with the addition of a GPS terrain database and is known as an enhanced ground proximity warning system (EGPWS). This and the older system have mandatory pilot procedures and actions following any caution or warning event.[5] Smaller aircraft often use a GPS database of terrain to provide terrain warning. The GPS database contains a database of nearby terrain and will present terrain that is near the aircraft in red or yellow depending on its distance from the aircraft.[6]

Statistics show that aircraft fitted with a second-generation EGPWS have not suffered a CFIT accident[7] if TAWS or EGPWS are properly handled (there are at least three CFIT accidents of planes with EGPWS/TAWS: Garuda Indonesia Flight 200, 2010 Polish Air Force Tu-154 crash, Mirosławiec air accident). As of 2007, 5% of the world's commercial airlines still lack a TAWS, leading to a prediction of two CFIT accidents in 2009.[7] The U.S. FAA has also conducted a study about civilizing 3D military thrust vectoring to recover jet liners from catastrophes.[8][9]

Many notable accidents have been ascribed to CFIT.