In geometry a henagon (or monogon) is a polygon with one edge and one vertex. It has Schläfli symbol {1}. Since a henagon has only one side and only one interior angle, every henagon is regular by definition.

In Euclidean geometry a henagon is usually considered to be an impossible object, because its endpoints must coincide, unlike any Euclidean line segment. For this reason, most authorities do not consider the henagon as a proper polygon in Euclidean geometry.

In spherical geometry, on the other hand, a finite henagon can be drawn by placing a single vertex anywhere on a great circle. Two henagons can be used to construct a dihedron on a sphere, with Schläfli symbol, {1,2}. 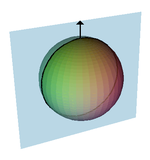