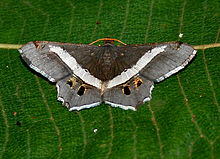 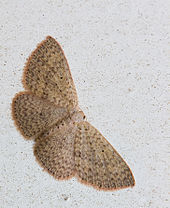 The geometer moths or Geometridae (from Greek geo γη or γαια 'the earth' and metron μέτρων 'measure' — refers to the larvae, which appear to "measure the earth" as they move in a looping fashion) are a family of the order Lepidoptera.[1] A very large family, it has around 35,000 species of moths described, and over 1,400 species from 6 subclasses indigenous to North America.[1] A well-known member is the Peppered Moth, Biston betularia, which has been subject of numerous studies in population genetics. Several other geometer moths are notorious pests.

Many geometrids have slender abdomens and broad wings which are usually held flat with the hindwings visible. As such they appear rather butterfly-like but in most respects they are typical moths: the majority fly at night, they possess a frenulum to link the wings and the antennae of the males are often feathered. They tend to blend in to the background, often with intricate, wavy patterns on their wings. In some species, females have reduced wings (e.g. winter moth and fall cankerworm).[1]

Most are of moderate size, about 3 centimetres (1.2 in) in wingspan, but a range of sizes occur from 10–50 mm (0.39–2.0 in), and a few species (e.g., Dysphania) reach an even larger size. They have distinctive paired tympanal organs at the base of the abdomen (lacking in flightless females).

A Geometridae caterpillar camouflaged as a broken twig 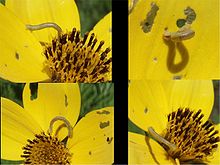 The name "Geometridae" ultimately derives from Latin geometra from Greek γεωμέτρης ("geometer, earth-measurer"). This refers to the means of locomotion of the larvae or caterpillars, which lack the prolegs of other Lepidopteran caterpillars in the middle portion of the body, with only two or three pairs at each end. Equipped with appendages at both ends of the body, a caterpillar will clasp with its front legs and draw up the hind end, then clasp with the hind end (prolegs) and reach out for a new front attachment - creating the impression that it is measuring its journey. The caterpillars are accordingly called loopers, spanworms, or inchworms after their characteristic looping gait. The cabbage looper is not an inchworm, but a caterpillar of a different family. In many species of geometer moths, the inchworms are about 25 mm (1.0 in) long. They tend to be green, grey, or brownish and hide from predators by fading into the background or resembling twigs. Many inchworms, when disturbed, stand erect and motionless on the prolegs, increasing the resemblance. Some have humps or filaments. They are seldom hairy or gregarious and are generally smooth. Typically they eat leaves. However, some eat lichen, flowers or pollen. Some, such as the Hawaiian species of the genus Eupithecia, are even carnivorous. Certain destructive inchworms are called cankerworms.

The placement of the example species follows a 1990 systematic treatment; it may be outdated. Families are tentatively sorted in a phylogenetic sequence, from the most basal to the most advanced. Traditionally the Archiearinae were held to be the most ancient of the geometer moth lineages, as their caterpillars have well-developed prolegs. However, it nowadays seems that the Larentiinae are actually older, as indicated by their numerous plesiomorphies and DNA sequence data. They are either an extremely basal lineage of the Geometridae – together with the Sterrhinae –, or might even be considered a separate family of Geometroidea. As regards the Archiearinae, some species that were traditionally placed therein actually seem to belong to other subfamilies; altogether it seems that in a few cases, the prolegs which were originally lost in the ancestral geometer moths re-evolved as an atavism.[2][3]

Larentiinae – about 5,800 species, includes the pug moths, mostly temperate. Might be a distinct family.[2][3]

Sterrhinae – about 2,800 species, mostly tropical. Might belong to same family as Larentiinae.[2]

Archiearinae – 12[verification needed] species; Holarctic, southern Andes and Tasmania, though the latter some seem to belong to the Ennominae.[3] Larvae have all the prolegs except most are reduced.

Oenochrominae – in some treatments used as a "wastebin taxon" for genera that are difficult to place in other groups.

Ennominae – about 9,700 species, including some defoliating pests; global distribution. 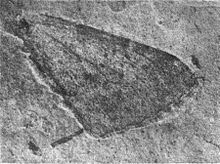