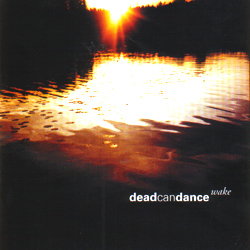 
"Wake" is a compilation from previous albums of released in 2003. It contains 26 tracks on two discs. It includes the song, "The Lotus Eaters", (previously released only on the box-set), which was recorded in 1998 as part of their new album but remained the last song recorded before the break-up of the band.

The name itself has multiple meanings. First, when taken in context of the sun rising on the cover, it could refer to the act of waking. Secondly, in the context of the name of the band itself, "wake" could refer to the process of changing from inanimate ("dead") to animate ("dancing"). Third, as it was released after the band had broken up, it could refer to a traditional Irish wake, the ceremony of watching over a recently deceased family member's body. It can even be interpreted to mean the wake in water following the movement of a boat, something which is hinted to on the album's cover.