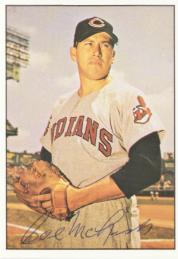 McLish was named for , , and . He has stated that the origin of his lengthy name is that his father was given permission to name the newborn, and he took full advantage of the opportunity. [http://www.baseballlibrary.com/ballplayers/player.php?name=Cal_McLish_1925]

*His birth name was "Calvin Coolidge Julius Caesar Tuskahoma McLish". He was nicknamed "Bus" or "Buster"
*Set a major league record with 16 consecutive road wins, later matched by , and
*After his playing career, McLish became a Major League pitching coach for the Phillies (1965-66), (1969-75) and (1976-82), then a scout for the Brewers