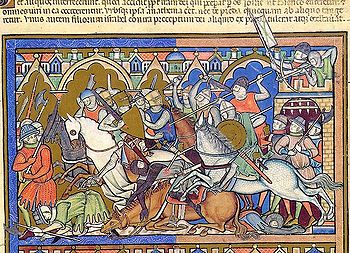 "The Israelites are repulsed from Hai" (fol. 10r)

The Morgan Bible (The Pierpont Morgan Library, New York, Ms M. 638) is a medieval picture bible of 44 folios. It is also called the Morgan Bible of Louis IX, the Book of Kings,[citation needed] the Crusader Bible, and the Maciejowski Bible. This book has long been thought to have been created under the direction of Louis IX of France in the mid-1240s, but Allison Stones, after indications of others such as François Avril, has long argued that it was most likely illuminated in the northern counties of France, ca. 1250 (cf most recently Allison Stones, "Questions of style and provenance in the Morgan Bible", in Between the Word and the Picture, Princeton, 2005). Originally it probably contained only paintings, organized in a consistent visual rhythm from page to page. Within 100 years, the book acquired marginal inscriptions in Latin describing the scenes illustrated. Cardinal Bernard Maciejowski, Bishop of Kraków, had the book given as a gift to Abbas I (Shah of Persia) in 1608. Abbas ordered inscriptions in Persian to be added, mostly translating the Latin ones already there. Later, perhaps in the eighteenth century, inscriptions were added in Judeo-Persian. Thus the book consists of beautiful paintings of events from Hebrew scripture, set in the scenery and customs of thirteenth-century France, depicted from a Christian perspective, and surrounded by text in three scripts and five languages (Latin, Persian, Arabic, Judeo-Persian, and Hebrew).

The Morgan Bible is a masterpiece of Gothic art. It testifies impressively to how persons make sense of words and images. Historical recreationists and members of the Society for Creative Anachronism, find in it valuable evidence about medieval clothing, weapons, and armor.