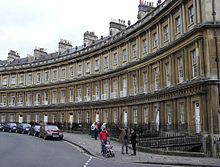 The Circus is an example of Georgian architecture in the city of Bath, Somerset, England, begun in 1754 and completed in 1768. The name comes from the Latin 'circus', which means a ring, oval or circle. It has been designated as a Grade I listed building.[1]

Divided into three segments of equal length, the Circus is a circular space surrounded by large townhouses. Each of the curved segments faces one of the three entrances, ensuring that whichever way a visitor enters there is a classical facade straight ahead.

The Circus, originally called King's Circus, was designed by the architect John Wood the Elder, although he never lived to see his plans put into effect as he died less than three months after the first stone was laid. It was left to his son, John Wood the Younger to complete the scheme to his father's design. The initial leases for the south west segment were granted in 1755-67, those for the south east segment in 1762-6, and those for the north segment in 1764–6.

The Circus was part of John Wood the Elder's grand vision to recreate a classical Palladian architectural landscape for the city. Other projects included nearby Queen Square and the Forum (which was never built). The Circus is the culmination of Wood's career, and is considered his masterpiece.[2] 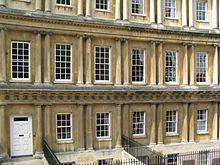 Detail of The Circus

Wood's inspiration was the Roman Colosseum, but whereas the Colosseum was designed to be seen from the outside, the Circus faces inwardly. Three classical Orders, (Greek Doric, Roman/Composite and Corinthian) are used, one above the other, in the elegant curved facades. The frieze of the Doric entablature is decorated with alternating triglyphs and 525 pictorial emblems, including serpents, nautical symbols, devices representing the arts and sciences, and masonic symbols. The parapet is adorned with stone acorn finials.

When viewed from the air, the Circus, along with Queens Square and the adjoining Gay Street, form a key shape, which is a masonic symbol similar to those that adorn many of Wood's buildings.

The central area was paved with stone setts, covering a reservoir in the centre that supplied water to the houses. In 1800 the Circus residents enclosed the central part of the open space as a garden. Now, the central area is grassed over and is home to a group of old plane trees.

During the Baedeker Blitz of 1942, a bomb fell into the Circus, demolishing several of the houses. These have since been reconstructed in the original style.

Part of the frieze showing the alternating triglyphs and decorative emblems

Architectural historian Dan Cruickshank selected the Circus as one of his five choices for the 2006 BBC television documentary series Britain's Best Buildings.[3]