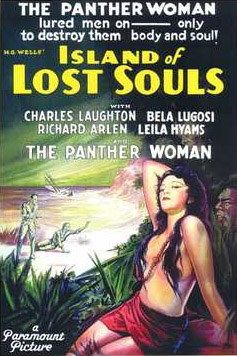 "Island of Lost Souls" is a sci-fi/ starring and . Produced by in 1933 from a script co-written by legend , the movie was the first film adaptation of the novel "", which Wells published in the 1890s. The film was directed by Erle C. Kenton.

Both book and movie were about a remote island that was run by an obsessed scientist who is secretly conducting surgical experiments on animals. The goal of these experiments is to try to transform the animals into human beings. The result of the experiments is a race of half-human, half-animal creatures that lives in the island's jungles, only tentatively under Moreau's control.

When a shipwreck sets ocean traveler Edward Parker () adrift, he gets picked up by a freighter that is delivering supplies to an isolated South Seas island owned by Dr. Moreau. The only thing Parker can find out about the doctor is that he likes his privacy. When Parker and the freighter's captain get into a fight, he ends up stranded on the island. Dr. Moreau () takes him in and it is then he begins to learn why Moreau is so secretive. At first he hears the strange noises at night suggesting the presence of unseen island natives. Later, when he tries to leave the house where he has been staying, Parker for the first time runs into the animal-men. Saved from them by Moreau and his assistants, Parker observes the island's strange social structure. Moreau cracks a whip and orders an animal-man known as the Sayer of the Law () to repeat the rule against violence. Once that happens, the animal-men return to the jungle. Moreau and his men return Parker to the main house. Once they are back inside, the doctor explains his experiments. The operations were done on the animals in a place he refers to as "the house of pain". Moreau also introduces Parker to his most successful experiment, a panther that now looks like an attractive human female. The panther-woman called Lota () is in fact so human that Moreau hopes that she and Parker will mate. The unexpected arrival of Parker's fiancee Ruth () ends that idea. Parker realizes that he has to escape the island with his fiancee but is unsure how to do this. His opportunity comes when Moreau is caught in an act of violence by the animal-men and they make the decision to revolt. They carry Moreau away to his own house of pain where he meets a grisly demise -- they eviscerate him with his own surgical instruments. Although this is not explicitly shown, Moreau's ghastly screams leave no doubt as to what is happening. Eventually the entire island goes up in flames. Parker and his fiancee then make their escape.

The film was examined and refused a certificate three times by the British Board of Film Censors, in 1933, 1951 and 1957. While the reason for the initial ban is not clear, it is likely that the , which forbade the portrayal of cruelty to animals in feature films released in Britain, was a significant factor in the BBFC's subsequent rejections. The film was eventually passed with an 'X' certificate on 9 July 1958. [James C. Robertson, "The Hidden Cinema: British Film Censorship in Action, 1913-1975", London, Routledge (1989), pp. 55-57.] Original author was outspoken in his dislike of the film, feeling the overt horror elements overshadowed the story's deeper philosophies.

Members of the new wave band were fans of the film. The "What is the law?" sequence formed part of the lyrics to Devo's song "," with Lugosi's query "Are we not men?" providing the title to their 1978 debut album ""

The band 's song "No Spill Blood" on their album is based on the book and this movie.

The film has been remade twice. Both the later versions used the title from the H. G. Wells novel. The first remake was released in and stars as the doctor (Lancaster perfectly matched Wells' description of the way Moreau physically looked). The second remake was released in and stars a flamboyant as Moreau. In the very similar Twilight People (1973), actress plays the role of the panther woman.