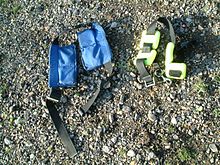 Divers wear weighting systems, weight belts or weights, generally made of lead, to counteract the buoyancy of other diving equipment, such as diving suits and aluminium diving cylinders. The diver must be weighted so that he is negatively buoyant by default, and then adjust the amount of air in his Buoyancy Compensation Device (BCD) in order to achieve neutral or positive buoyancy as needed.

Providing the weights have a method of quick release, they provide a useful rescue mechanism: they can be dropped in an emergency to provide instant buoyancy which may return the diver to the surface. Dropping weights increases the risk of barotrauma and decompression sickness due to uncontrollable ascent to the surface. This risk can only be justified when the emergency is life threatening. Very often divers take great care to ensure the weights are not dropped accidentally, and many heavily-weighted divers arrange their weights so subsets of the total weight can be dropped individually, allowing for a somewhat more controlled emergency ascent.

The quantity of lead weight required is determined by the overall positive buoyancy of the diver, which depends on the diver's body composition, buoyancy of other diving gear worn (especially the diving suit), water salinity, and water temperature. It normally is in the range of 2 kg / 4 pounds to 15 kg / 33 pounds.

The weights are generally made of lead because of its high density, low cost, and resistance to corrosion. The lead can be cast in blocks, cast block with gaps for straps or shaped as pellets often named "shot".

Weight belts are the most common weighting system currently in use of recreational diving.[1] Weight belts are often made of tough nylon, but other materials such as rubber can be used. Weight belts are generally fitted with a quick release buckle to allow the dumping of weight rapidly in an emergency.

A belt made of rubber is called a Marseillaise belt. These belts are popular with freedivers as the rubber contracts on descent as the diving suit and lungs are compressed, keeping the belt tight throughout the dive.[2] 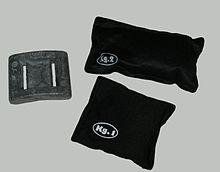 The most common design of weight used with a belt consists of plain, rectangular lead blocks with two slits in them threaded onto the belt. These blocks can be coated in plastic, which further increases corrosion resistance. These weights are often marketed as being less abrasive to wetsuits.

Some weightbelts contain pouches to contain lead weights or round lead shot: this system allows the diver to add or remove weight more easily than with weights threaded onto the belt. The use of shot can also be more comfortable, as the shot moulds to the diver's body. Weight belts using shot are called shot belts. Each shot pellet should be coated to prevent corrosion by sea water, as use of uncoated shotgun shot here for sea diving would result in the lead corroding into powdery lead chloride.

These are stored in pockets built-in to the buoyancy control device. Often a velcro flap holds the weights in place. The weights may also be contained in zippered or velcroed pouches that slot into special pockets in the BCD. They have handles, which must be pulled to drop the weights in an emergency or to remove the weights when exiting the water. Some designs also have smaller "trim pouches" located higher in the BCD, which may help the diver maintain neutral attitude in the water. Trim pouches typically can not be ditched quickly, and are designed to hold only 1-2 pounds (0.5-1 kg) each. Many integrated systems cannot carry as much weight as a separate weight belt: a typical capacity is 6 kg per pocket, with two pockets available.[3]

A weight harness consists of a belt around the waist holding pouches for the weights with shoulder straps for extra support and security. Often a velcro flap holds the weights in place. They have handles, which must be pulled to drop the weights in an emergency or to remove the weights when exiting the water.

Some rebreathers (e.g. the Siebe Gorman CDBA) have a pouch full of lead balls each a bit over an inch diameter. The diver can release them by pulling a cord.

In addition to the weight that can be dropped easily ('ditched'), some divers add additional fixed weights to their gear, either to reduce the weight placed on the belt, which can cause lower back pain, or to shift the diver's center of mass to achieve the optimum position in the water.