Gonzalo Fernández de Córdoba known as The Great Captain, Duke of Terranova and Santangelo, Andria, Montalto and Sessa, also known as Gonzalo de Córdoba, Italian: Gonsalvo or Consalvo Ernandes di Cordova (September 1, 1453 – December 2, 1515) was a Spanish general fighting in the times of the Conquest of Granada and the Italian Wars. He reorganized the emerging Spanish army and its tactics and came to be known as "the Father of Trench Warfare". He was admired by the generation of conquistadors that followed and many influential men fought under him such as the father of Francisco Pizarro.

He was born at Montilla, in what is now the province of Córdoba, a younger son of Pedro Fernández de Córdoba, Count of Aguilar, and his wife Elvira de Herrera.[1]

He and his elder brother, Alonso, became orphans while very young boys. The counts of Aguilar carried on an hereditary feud with the rival house of Cabra, in spite of both family branches coming from the same family tree. As a cadet child within the family, he could not expect much on the way of inherited wealth or titles, having, as nearly always then, to try a church or a military career, the latter being more satisfactory to his wishes.

He was first attached to the household of Don Alfonso, the king's half brother, and upon his death devoted himself to Prince Alfonso's uterine half-sister, Isabel of Castile, who later, mediating a civil war, had proclaimed herself successor queen in 1474, disputing the right of her niece, Juana, to ascend the throne.

During the ensuing civil war between the followers of the daughter of deceased King Henry IV of Castile, Juana la Beltraneja, and the king's half sister Princess Isabella of Castile, there were also conflicts with Portugal as king Afonso V of Portugal sided during the war with his 13 year old niece, Juana. Córdoba fought under the grand master of the Order of Santiago, Alonso de Cárdenas. After the battle of Albuera, the grand master gave him special praise for his behavior.

Role in the conquest of Granada

During the ten-year long conquest of Granada under the Catholic monarchs, he completed his apprenticeship under his brother Alonso, the grand master of Santiago, Alonso de Cardenas, and the counts of Aguilar and of Tendilla, of whom he spoke always as his masters. It was a war of sieges and the defence of castles or towns, of skirmishes, and of ambushes in the defiles of the mountains. The skills of a military engineer and a guerilla fighter were equally employed. Córdoba's most distinguished feat was the defence of the advanced post of Íllora. Able to speak Berber Arabic, the language of the emirate, he was chosen as one of the officers to arrange the capitulation, and, with the peace of 1492, was rewarded with a grant of land in the town of Loja, near the city of Granada.

He married, as a widower, one of the ladies in waiting to Queen Isabella I of Castile, namely, Luisa Manrique de Lara, on 14 February 1489, when he was already aged 36 . His only surviving daughter, Elvira Fernández de Córdoba y Manrique, would inherit all their titles on his death in 1515. In order to keep her father's name, she married within the close family, with someone from a long time antagonistic branch but bearing also her own family name, "Fernández de Córdoba". 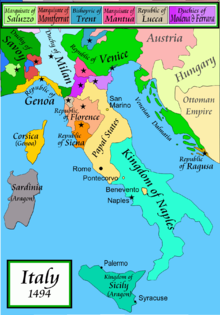 Italy political map around 1494 when king Frederick IV of Naples took power as the second inheriting son of Royal bastard king Ferdinand I of Naples.

When the Catholic Monarchs decided to support the Aragonese house of Naples against Charles VIII of France, Gonzalo, in his mid forties, was chosen by the influence of the Queen, and in preference to older men, to command the Spanish expedition. In Italy, he won the title of the Great Captain.

Italian historian Francesco Guicciardini says that it was given him by the customary arrogance of the Spaniards.

He held the command in Italy twice. In 1495 he was sent with a small force of little more than five thousand men to aid Ferdinand I of Naples, by then brother in law of king Ferdinand II of Aragon to recover his kingdom.

Path to Italian success after failure

Ordered to pit his light infantry and cavalry against the heavy French forces, his first major battle in Italy, at Seminara in 1495, ended in defeat at the hands of Bernard Stewart d'Aubigny. The following year, he captured the rebel county of Alvito for the King and avoiding a major pitched battle, used his highly mobile forces to drive the French back to Calabria.

He returned home in 1498. After a brief interval of service against the conquered Moors who had risen in revolt, he was back to Italy in 1501. Ferdinand II of Aragon had entered into his apparently iniquitous compact with Louis XII of France for the spoliation and division of the kingdom of Naples. The Great Captain was chosen to command the Spanish part of the coalition. As general and as viceroy of Naples he remained in Italy till 1507.

During his first command he was mostly employed in Calabria in mountain warfare which bore much resemblance to his former experience in Granada. There was, however, a material difference in the enemy. The French forces under d'Aubigny consisted largely of Swiss mercenary pikemen, and of their own men-at-arms, the heavily armoured professional cavalry, the gendarmes. With his veterans of the Granadine war, foot soldiers armed with sword and buckler, or arquebuses and crossbows, and light cavalry, who possessed endurance unparalleled among the soldiers of the time, he could carry on a guerrilla-like warfare which wore down his opponents, who suffered far more than the Spaniards from the heat.

His experience at Seminara showed him that something more was wanted on the battlefield. The action was lost mainly because Ferdinand, disregarding the advice of Gonzalo, persisted in fighting a pitched battle with their more lightly equipped troops. In the open field, the loose formation and short swords of the Spanish infantry put them at a disadvantage against a charge of heavy cavalry and pikemen. Gonzalo therefore introduced a closer formation, and divided the Spanish infantry into the battle or main central body of pikemen, and the wings of shot, called a colunella - the original pike and shot formation.

The French were expelled by 1498 without another battle, king Charles VIII of France dying in April 1498. When the Great Captain reappeared in Italy he had first to perform the congenial task of driving the Turks out of Kefalonia, together with such condottieri as Pedro Navarro, helping the Venetian navy to reconquer the Castle of Saint Georges, 25 December 1500, killing there over 300 people including the Albanian born leader of the garrison Gisdar, to aid in the campaign against Frederick IV of Naples. 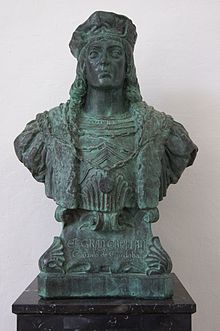 When the king of Naples had been deposed, the French and Spaniards engaged in a guerilla war while they negotiated the partition of the kingdom. The Great Captain now found himself with a much outnumbered army besieged in Barletta by the French. The war was divided into two phases very similar to one another. During the end of 1502 and the early part of 1503 the Spaniards were besieged in Barletta near the Ofanto on the shores of the Adriatic. Cordoba resolutely refused to be tempted into battle either by the taunts of the French or the discontent of his own soldiers. Meanwhile he employed the Aragonese partisans in the country, and flying expeditions of his own men, to harass the enemy's communications and distracted his men with a tournament between Italian knights under Ettore Fieramosca and French prisoners.

When he was reinforced, and the French committed the mistake of spreading out their forces to forage for supplies, he took the offensive and pounced on his enemies supply depot in the Cerignola. There he took up a strong defensive position (he was still outnumbered three to one), threw up hasty field works and strengthened them with wired entanglements. The French made a headlong front attack, were repulsed, assailed in the flank, and routed in only half an hour by the combination of firepower and defensive measures. Later operations on the Garigliano against Ludovico II of Saluzzo were very similar, and led to the total expulsion of the French from the Kingdom of Naples. 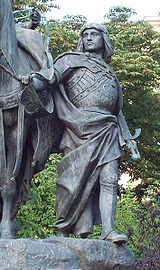 Statue of Gonzalo de Córdoba in Madrid (by Manuel Oms, 1883).

Cordoba was appointed Viceroy of Naples in 1504. However, his fame aroused the jealousy of so typical a renaissance monarch as Ferdinand II of Aragon. Furthermore, Cordoba was profligate in using the public treasury to reward his captains and soldiers. The death of queen Isabel I in 1504 deprived him of a friend and protector and in 1507 he was recalled. Ferdinand loaded him with titles and fine words, but left him unemployed till his death.

Córdoba was first among the founders of modern warfare. As a field commander, Córdoba, like Napoleon three centuries later, saw his goal in the destruction of the enemy army. He systematically organized the pursuit of defeated armies after a victory in order to destroy the retreating enemy. Córdoba helped found the first modern standing army and the nearly invincible Spanish infantry that dominated the battlefields of Europe for most of the 16th and 17th centuries.

The best generals of Charles V, Holy Roman Emperor and Philip II of Spain were either the pupils of the Great Captain or were trained by them.

Córdoba's influence upon military tactics was profound. Wellington's Torres Vedras campaign has a distinct resemblance to Córdoba's campaign at Barletta and the Battle of Assaye is easily compared with that at Garigliano.

It is noted that Cordoba directed the first battle in history won by gunpowder small arms in the battle of Cerignola. Additionally at the end of the same battle of Cerignola occur for the first time a "call to prayer" (toque de oracion) adopted later for all western armies, when the Great Captain seeing the fields full of french bodies (Christian like the Spaniards) ordered to play three long tones and had his troops pray for all the fallen.

He left no sons, so he was succeeded in his dukedoms by his daughter, Elvira Fernández de Córdoba y Manrique.

His burial place, Monastery of San Jerónimo, Granada, was built in Renaissance style by his wife and daughter. It was desecrated by French Napoleonic troops under the command of Corsican General Sebastiani at the beginning of the 19th century. Stone from the tower was used to build the "Puente Verde" bridge over the river Genil. The monastery was fully restored at the end of the 19th century.

Gonzalo's renown was great and his extensive knowledge was passed on to the next generation through the men that served under him. A few men such as Amador de Lares, who was steward to the Great Captain, accompanied Hernán Cortés during his conquest of the Aztec Empire.