The Circle Line (CCL) is Singapore's fourth Mass Rapid Transit line, operated by SMRT Corporation. This underground line is currently 35.7 kilometres (22.2 mi) long with 28 stations (excluding Bukit Brown) and is fully automatically operated.[1] It takes about a hour to travel from one end to the other and is coloured orange on the rail map.

As the name implies, the line is an orbital line linking all radial lines leading to the city, and also covering many parts of the Central Area. It will also include a branch line beginning at Promenade Station and ending at Marina Bay Station. Transfers to the North South Line will be provided at Bishan, Dhoby Ghaut and Marina Bay stations, East West Line at Paya Lebar and Buona Vista stations, and North East Line at Dhoby Ghaut, Serangoon and HarbourFront stations. The future Downtown Line will interchange with the Circle Line at Bayfront, Promenade, Botanic Gardens and MacPherson stations.

The Circle Line is the first medium capacity line in Singapore. As a medium capacity line, each Circle Line train has only three cars instead of the six-car configuration as seen on current MRT lines. The rolling stock consists of forty Alstom Metropolis C830 trains. When complete, half a million people are expected to use the Circle Line each day. The completed line will reduce travelling time for commuters by allowing them to shorten trips between north to east or north to west and vice versa, bypassing busy interchange like City Hall and Raffles Place.

Currently, the Circle Line is not a full circle yet, as there will be no through service on the section between Harbourfront and Marina Bay or Dhoby Ghaut. Passengers will need to transfer onto the North East Line instead. However, a branch passing through the Marina District has been built, and a "Stage 6" that would complete the circle, has been mooted but is not officially planned.[2]

Plans for the Circle Line date back to the 1980s. The then Minister for Communications and Information, Dr Yeo Ning Hong stated that such a system "would be feasible when the population reaches four million".

Originally scheduled to be opened from 2006 and fully opened in 2010, with an estimated cost of S$6.7 billion, the Nicoll Highway collapse caused the construction of the line to be delayed. As a result, the opening of the Circle Line was delayed to 2009, with full opening by 2011 (excluding the Marina Bay Extension), at an escalated cost of nearly S$10 billion.[3] Due to the re-alignment of the Nicoll Highway Station to a new location, the station is only two-thirds the size of the original plan before the collapse, and located 100 metres (330 ft) away from the highway collapse site.[4] The decision was also made to open both Caldecott, and Haw Par Villa stations (previously Thomson and West Coast), initially planned as shell stations, together with the whole line, leaving only Bukit Brown Station closed.

On April 27, 2007, the LTA announced a new branch line from Promenade to Bayfront station,[9] with a further extension of the line from Bayfront Station to Marina Bay Station announced a year later. On October 3, 2011, Transport Minister Lui Tuck Yew announced that the Marina Bay Extension will open in January 2012.

The Circle Line is widely expected to have a Stage 6 which completes the circle from HarbourFront to Marina Bay stations. Several options have been mooted for closing the 4 kilometres (2.5 mi) gap, primarily a northern route through the existing Tanjong Pagar Station or a southern route passing through the Port of Singapore's Tanjong Pagar dock area, whose lease expires in 2027. The cost of closing the gap has been estimated to be at S$1.5 to 2.0 billion at 2010 prices.

Several accidents occurred during the construction of the Circle Line, most notably the Nicoll Highway collapse, which occurred on April 20, 2004.

On April 20, 2004, a section of the tunnel being built for the Circle Line collapsed, apparently when a retaining wall used in the tunnel's construction gave way. This occurred near what was planned to become the Nicoll Highway Station on the Circle line, not far from the Merdeka Bridge. The accident left a collapse zone 150 metres (490 ft) wide, 100 metres (330 ft) long, and 30 metres (98 ft) deep. Four workers were killed, with three more injured.

A criminal inquiry found the main contractor Nishimatsu Construction Company and joint venture partner firm Lum Chang Construction Company and their officers, as well as key Land Transport Authority officers responsible for the collapse. Several other officers and subcontractors were reprimanded and issued warnings in connection with the accident.

As a result of this accident, the first phase of the Circle Line, previously scheduled to open in 2008, was completed in 2010 instead. The affected station has been shifted about 100 metres (330 ft) away from the accident site and is now located at Republic Avenue.

This accident had also resulted in stricter safety regulations for the construction of all future MRT lines. The shifting of the Nicoll Highway Station also meant it can no longer serve as a terminus for the Bukit Timah Line, partially influencing the creation of the current Downtown Line.

On August 16, 2007, the Building and Construction Authority (BCA) issued a stop-work order and revoked the contractor's tunnelling permit after a 7 metres (23 ft) stretch of two lanes sank about 20 centimetres (7.9 in), close to the junction of Telok Blangah Road and Alexandra Road in the evening, resulting in a halting of tunnelling works.[10]

A section of the road above a construction site near Holland Road caved in on the morning of May 24, 2008, creating a massive hole. The hole, directly in front of two private houses along Cornwall Gardens Road, measured 8 by 7 metres and was 3 metres deep. No one was injured, but the road was temporarily closed to traffic.[11]

On 20 September 2011, a power fault disrupted train services on all 16 stations on the Circle Line. The four hours delay left thousand of commuters stranded during rush-hour. It was reported that leaks and a damaged cable along the Circle Line were the caused of the disruption.[12] The disruption started at about 5.30am. Train services were gradually restored from 8am and all services were restored just before 10am. Dakota and Mountbatten stations were the last two to resume operations.[13] Investigations were carried out. It was later found that a faulty cable beneath the platform level at Dakota Station caused a power fault on Tuesday morning that affected train services at all 16 stations on the Circle Line.[14] 27,000 passengers were affected by the disruption during the four hours delay, with bus bridging services plying the Circle Line route.[15] The latest disruption occurred on 17 October 2011. At about 8.36am, a train heading from Labrador Park Station to Pasir Panjang Station experienced a train fault and had to be taken out of service. Announcements were made in the affected stations, while bus bridging services were provided plying the affected section of the Circle Line. Normal train services resumed at 11.12am.[16] [17] 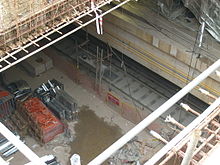 View of underground platform at Bishan Station of the Circle Line from ground level (when under construction). This station interchanges with Bishan Station on the North South Line 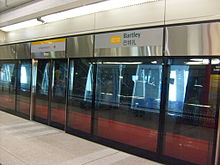 A view from the platform of Bartley Station. Here, an Alstom Metropolis C830 (rolling stock for the Circle Line) is parked in the station.
Main article: List of Circle MRT Line station names 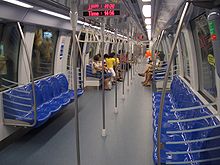 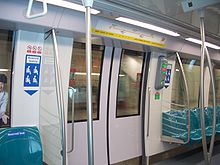 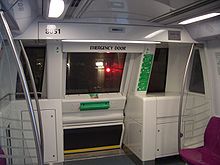 The rolling stock consists of Alstom Metropolis C830 trains[18] running in three-car formation. They are stabled at Kim Chuan depot, the world's largest underground depot. 16 additional trainsets will arrive around 2015.[19]