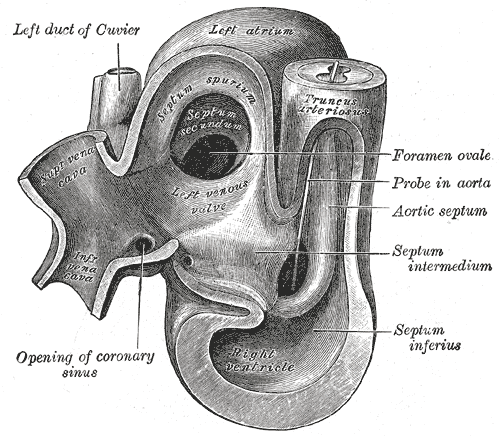 Caption = of human of about thirty-five days, opened on right side. (Aortic septum labeled at center right.)

Caption2 = Diagrams to show the development of the septum of the and of the ventricles. (Aortic septum labeled at center top.)
System =
CarnegieStage =
Days =
Precursor =
GivesRiseTo =
MeshName =
MeshNumber =
DorlandsPre =
DorlandsSuf =
In the developing , the truncus arteriosus and are divided by the aortic septum. This makes its appearance in three portions.

(1) Two distal ridge-like thickenings project into the lumen of the tube; these increase in size, and ultimately meet and fuse to form a septum, which takes a spiral course toward the proximal end of the . It divides the distal part of the truncus into two vessels, the aorta and pulmonary artery, which lie side by side above, but near the heart the is in front of the .

(2) Four appear in the proximal part of the truncus arteriosus in the region of the future ; the manner in which these are related to the aortic septum is described below.

(3) Two endocardial thickenings—anterior and posterior—develop in the bulbus cordis and unite to form a short septum; this joins above with the aortic septum and below with the ventricular septum. The septum grows down into the ventricle as an oblique partition, which ultimately blends with the ventricular septum in such a way as to bring the bulbus cordis into communication with the , and through the latter with the sixth pair of ; while the left ventricle is brought into continuity with the aorta, which communicates with the remaining aortic arches.