Buffer zone
For the Karachi neighbourhood, see Buffer Zone, Karachi.
This article is about buffer zones in general. For use relating to abortion, see Legal protection of access to abortion. 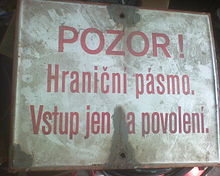 Czechoslovak sign dating from the beginning of the 1980s, informing of entry into the frontier zone. The sign reads, "WARNING! Border Zone. Enter only with authorization."

A buffer zone is generally a zonal area that lies between two or more other areas (often, but not necessarily, countries), but depending on the type of buffer zone, the reason for it may be to segregate regions or to conjoin them. Common types of buffer zones are demilitarized zones, border zones and certain restrictive easement zones and green belts. Such zones may be, but not necessarily be, comprised by a sovereign state, forming a buffer state.

Buffer zones have various purposes, political or otherwise. They can be set up to prevent violence, protect the environment, protect residential and commercial zones from industrial accidents or natural disasters, keep prisoners intent on escaping from rapidly acquiring hostages or a hiding place, and have uses in several other scenarios. Buffer zones often result in large uninhabited regions which are themselves noteworthy in many increasingly developed or crowded parts of the world.

For use in nature conservation, a buffer zone is often created to enhance the protection of areas under management for their biodiversity importance. The buffer zone of a protected area may be situated around the periphery of the region or may be a connecting zone within it which links two or more protected areas, therefore increasing their dynamics and conservation productivity. A buffer zone can also be one of the protected area categories (e.g. category V or VI of IUCN Protected Area) or a classification scheme (e.g. NATURA 2000) depending on the conservation objective.[1] The term 'buffer zone' initially gained prominence in the conservation of natural and cultural heritage through its usage in the establishment of UNESCO's World Heritage Convention, and the term was intended to be used as follows:

A buffer zone is intended to avert the effect of negative environmental or human influences, whether or not it embodies great natural or cultural value itself.[3] The importance and function of a buffer zone and the necessary protective measures derived thereof is a relatively new concept in conservation science and can differ greatly for each site.[4]