An adenoma is a benign tumor (-oma) of glandular origin. Adenomas can grow from many organs including the colon, adrenal glands, pituitary gland, thyroid, prostate, etc. Although these growths are benign, over time they may progress to become malignant, at which point they are called adenocarcinomas. Even while benign, they have the potential to cause serious health complications by compressing other structures (mass effect) and by producing large amounts of hormones in an unregulated, non-feedback-dependent manner (paraneoplastic syndrome).

Adenoma is a benign tumor of epithelial tissue, such as the mucosa of stomach, small intestine, and colon, in which tumor cells form glands or glandlike structures. In hollow organs (digestive tract), the adenoma grows into the lumen - adenomatous polyp or polypoid adenoma. Depending on the type of the insertion base, adenoma may be pedunculated (lobular head with a long slender stalk) or sessile (broad base).

The adenomatous proliferation is characterized by different degrees of cell dysplasia (atypia or loss of normal differentiation of epithelium) irregular cells with hyperchromatic nuclei, (pseudo)stratified nuclei, nucleolus, decreased mucosecretion, and mitosis. The architecture may be tubular, villous, or tubulo-villous. Basement membrane and muscularis mucosae are intact.

Adenomas of the colon are quite prevalent. They are found commonly at colonoscopy. They are removed because of their tendency to become malignant and to lead to colon cancer.

This is a tumor that is most often small and asymptomatic, and is derived from renal tubules. It may be a precursor lesion to renal carcinoma. 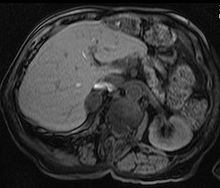 Adrenal adenomas are common, and are often found on the abdomen, usually not as the focus of investigation; they are usually incidental findings. About one in 10,000 is malignant. Thus, a biopsy is rarely called for, especially if the lesion is homogeneous and smaller than 3 centimeters. Follow-up images in three to six months can confirm the stability of the growth.

While some adrenal adenomas do not secrete hormones at all, often some secrete cortisol, causing Cushing's syndrome, aldosterone causing Conn's syndrome, or androgens causing hyperandrogenism.

About one in 10 people are found to have solitary thyroid nodules. Investigation is required because a small percentage of these are malignant. Biopsy usually confirms the growth to be an adenoma, but, sometimes, excision at surgery is required, especially when the cells found at biopsy are of the follicular type.

Pituitary adenomas are seen in 10% of neurological patients. A lot of them remain undiagnosed. Treatment is usually surgical, to which patients generally respond well. The most common subtype, prolactinoma, is seen more often in women, and is frequently diagnosed during pregnancy as the hormone progesterone increases its growth. Medical therapy with cabergoline or bromocriptine generally suppresses prolactinomas; progesterone antagonist therapy has not proven to be successful.

An adenoma of a parathyroid gland may secrete inappropriately high amounts of parathyroid hormone and thereby cause primary hyperparathyroidism.

See Hepatocellular adenoma. Hepatic adenomas are a rare benign tumour of the liver, which may present with hepatomegaly or other symptoms.

Breast adenomas are called fibroadenomas. They are often very small and difficult to detect. Often there are no symptoms. Treatments can include a needle biopsy, and/or removal.

Adenomas can also appear in the appendix. The condition is extremely rare, and most physicians will never encounter an actual case, but they do happen. The most common version is called cystadenoma. They are usually discovered in the course of examination of the tissue following an appendectomy. If the appendix has ruptured and a tumor is present, this presents challenges, especially if malignant cells have formed and thus spread to the abdomen.

Bronchial adenomas are adenomas in the bronchi. They may cause carcinoid syndrome, a type of paraneoplastic syndrome.[1]

A sebaceous adenoma is a cutaneous condition characterized by a slow-growing tumour usually presenting as a pink, flesh-coloured, or yellow papule or nodule.