The Detroit People Mover is a 2.9-mile (4.7 km) automated people mover system which operates on a single set of tracks, and encircles downtown Detroit, Michigan.[2]

The city's elevated light-rail system, the People Mover is operated by the Detroit Transportation Corporation of the City of Detroit. It is an important asset for business travelers, tourists, residents, and downtown workers.

The Woodward Avenue Light Rail, beginning in 2013, will serve as a link between the Detroit People Mover and SEMCOG Commuter Rail with access to DDOT and SMART buses as part of a comprehensive network of transportation in metropolitan Detroit.[3]

It uses UTDC ICTS Mark I technology and the cars are driverless. A siding allows the system to be used in a two-way bypass manner when part of the circular track is closed.

The Detroit People Mover has its origins in 1966, with Congressional creation of the Urban Mass Transportation Administration (UMTA) to develop new types of transit. In 1975, following the failure to produce any large-scale results and increased pressure to show results, UMTA created the Downtown People Mover Program (DPM) and sponsored a nationwide competition that offered federal funds to cover much of the cost of planning and construction of such a system. Selecting proposals from four cities, the UMTA recommended that Detroit, Miami, and Baltimore be permitted to construct systems, but only if they could do so with existing grants. Though two of the four selected cities ultimately withdrew from the program, Miami and Detroit persevered to build theirs.[4]

The People Mover was intended to be the downtown distributor for a proposed city and metro-wide light rail transit system for Detroit in the early 1980s; however, funding was scaled back.[5] At the time of planning, the system was projected to have a ridership of 67,700 daily.[6] 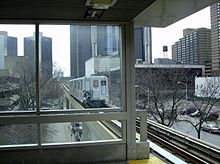 The system opened in 1987 using the same technology as Vancouver's SkyTrain and Toronto's Scarborough RT line. In the first year, an average of 11,000 riders used the People Mover each day; the one-day record was 54,648.[7]

When the People Mover opened, it traditionally ran counter-clockwise. In August 2008, the system changed direction and is now running clockwise permanently, although it can run in both directions when necessary. The change to clockwise meant that trains were faster.[8]

There have been proposals to extend the People Mover northward to the New Center and neighborhoods not within walking distance of the city's downtown. A proposal has been put forward by Marsden Burger, former manager of the People Mover, to double the length of the route by extending the People Mover along Woodward Avenue to West Grand Boulevard and into the New Center area.[13] New stops would include the Amtrak station, Wayne State University and the cultural center, the Detroit Medical Center, and the Henry Ford Hospital. The plan would tentatively cost $150–200 million, and would be paid for by a combination of public and private financing.[14]

The People Mover has been criticized often for its constant breakdowns, plus its slowness, both in movement and in picking up passengers, as well as certain stops being too close to one another (like Bricktown to Greektown, which some residents joke, due to said slowness, they can walk from one stop to another faster than it would take a People Mover train to move between the two).

The DPM stops at 13 stations, eight of which were built into existing buildings. Each station has original artwork.

The system operates in 2 car pairs.