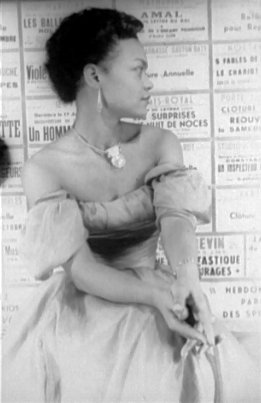 Kitt was born Eartha Mae Keith on a cotton plantation in the tiny town North, . Though her ancestry is somewhat uncertain, she states her mother was of and Native American descent, and her father, German- or Dutch-American. She was conceived of rape.

Kitt got her start as a member of the and made her film debut with them in "" (1948). A talented singer with a distinctive voice, her hits include "", "", "Just an Old Fashioned Girl", "Monotonous", "Love for Sale", "I'd Rather Be Burned as a Witch", "Uska Dara", "Mink, Schmink", "", and her most recognizable hit, "." Kitt's unique style was enhanced as she became fluent in the during her years performing in Europe. She dabbled in other languages as well, which she demonstrates with finesse in many of the live recordings of her cabaret performances.

In 1950, gave her her first starring role, as in his staging of "". A few years later, she was cast in the revue "" introducing "Monotonous" and "Bal, Petit Bal," two songs with which she continues to be identified. In 1954, filmed a version of the revue simply titled "New Faces". Welles and Kitt allegedly had a torrid affair during her run in "", which earned her the nickname by Welles as "the most exciting woman in the world." In 1958, Kitt made her feature film debut opposite in "The Mark of the Hawk". Throughout the rest of the 1950s and early 1960s, Kitt would work on and off in film, television and on nightclub stages. In the 1960s television series "Batman", she played after left the role.

In 1968, however, Kitt encountered substantial professional setback after she made anti-war statements during a luncheon. It was reported that she made First Lady cry. The public reaction to Kitt's statements were much more extreme, both for and against her statements. Professionally exiled from the U.S., she devoted her energies to overseas performances.

During that time, cultural references to her grew, including outside the United States, such as the well-known sketch, "the cycling tour", where an amnesiac believes he is first , then and finally Eartha Kitt (while performing to an enthusiastic crowd in Moscow). She returned to in a triumphant turn in the Broadway spectacle "" (a version of the perennial "Kismet" set in Africa) in 1978. In the musical, one song gives a 'recipe' for "mahoun", a preparation of , in which her sultry purring rendition of the refrain "constantly stirring with a long wooden spoon" was distinctive.

In 1984, she returned to hit music with a song, "", the first certified Gold record of her career. "Where Is My Man" reached the on the , where it peaked at #36; [ [http://www.chartstats.com/songinfo.php?id=11209 UK Singles Chart info at chartstats.com] ] the song also made the Top 10 on the US "Billboard" dance chart, where it reached #7. [Whitburn, Joel (2004). "Hot Dance/Disco 1974-2003", (Record Research Inc.)] Kitt found new audiences in nightclubs across the UK and the US, including a whole new generation of gay male fans, and she responded by frequently giving benefit performances in support of organizations. Her 1989 follow-up hit "Cha-Cha Heels" (featuring ), and originally intended to be recorded by Divine, received a positive response from UK dance clubs and reached #32 in the UK charts.

In the late 1990s she appeared as the Wicked Witch of the West in the North American national touring company of "The Wizard of Oz". In 2000, Kitt again returned to Broadway in the short-lived run of 's "The Wild Party" opposite and . Begininng in late 2000, she starred as the Fairy Godmother in the National tour of "Cinderella" alongside and then . In 2003, she replaced in "Nine". She reprised her role of the Fairy Godmother at a special engagement of "Cinderella" which took place at during the holiday season of 2004.

One of her more unusual roles was as the python in a 1994 adaptation of "". Kitt lent her distinctive voice to the role of in Disney's "" and returned to the role in the sequel "" and the spin-off TV series "", for which she has won an Emmy Award and two for Voice Acting in an Animated Television Production. She had a voiceover as the voice of Queen Vexus on the animated TV series "".

In recent years, Kitt's annual appearances in New York have made her a fixture on the Manhattan scene. She takes the stage at venues such as The Ballroom and, more recently, the Café Carlyle to explore and define her highly stylized image, alternating between signature songs (such as "Old Fashioned Millionaire"), which emphasize a witty, mercenary world-weariness, and less familiar repertoire, much of which she performs with an unexpected ferocity and bite that present her as a survivor with a seemingly bottomless reservoir of resilience — her version of "Here's to Life", frequently used as a closing number, is a sterling example of the latter. This side of her later performances is reflected in at least one of her recordings, , which preserves a series of performances with a small jazz combo that took place in the early 1990s in and which includes both standards () and numbers (such as "Something May Go Wrong") that seem more specifically tailored to her talents; one version of the CD includes as bonus performances a fierce, angry "Yesterdays" and a live rendering "C'est Si Bon" that good-humoredly satirizes her sex-kitten persona.

From October to early December, 2006, Kitt co-starred in the Off-Broadway musical "Mimi Le Duck". She also appeared in the 2007 independent film "" opposite .

After romances with the cosmetics magnate and banking heir , she was married to Bill McDonald from 1960 to 1965. They had one child, a daughter, Kitt Shapiro. Eartha has two grandchildren, Jason and Rachel. She lived for many years in , NY, but recently moved to Westport, Connecticut to be near her daughter's family. In 2007, she performed at the Hotel Carlyle in New York.

Kitt was the spokesperson for Smoke Signals collection in August 2007. She re-recorded "" for the occasion, was showcased on the MAC website and the song was played at all MAC locations carrying the collection for the month.

Kitt has two , three , and in 1960, honored with a star on the . [cite news | author=Staff writers | title=Eartha Kitt tickets competition | url=http://www.telegraph.co.uk/arts/main.jhtml?xml=/arts/exclusions/music/competitions/kittcomp.xml | work=The Telegraph | date=2008-01-24 | accessdate=2008-07-31] She received nominations for two , two , a one