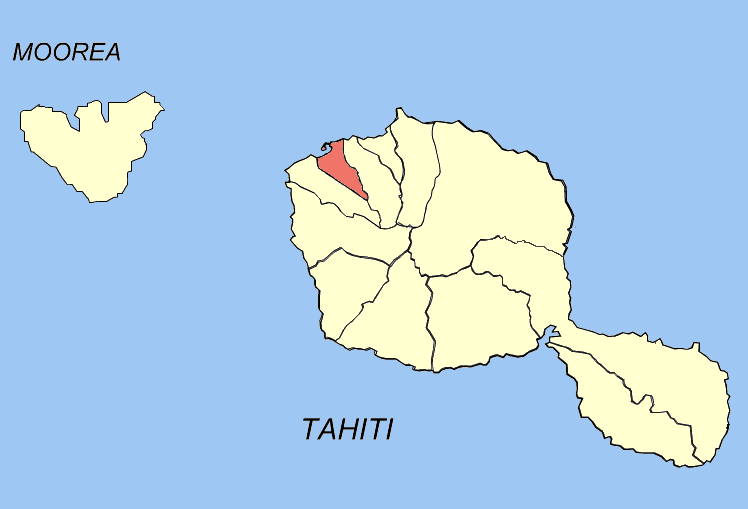 Papeete ("water from a basket", [Kay, p102] see footnote for variant spelling) (pronounced|papeʔete) is the of , an overseas territory of in the . The commune (municipality) of Papeete is located on the island of , in the administrative subdivision of the Windward Islands, of which Papeete is the administrative capital. The French High Commissioner also resides in Papeete. [Kay, p106] It is the primary center of Tahitian and French Polynesian public and private governmental, commercial, industrial and financial services, the hub of French Polynesian tourism and a commonly used . [Kay, p106] The Windward Islands are themselves part of the .

The area that now constitutes Papeete was first settled by the British missionary William Crook of the London Missionary Society in 1818. [Kay, p102] Queen Pōmare IV moved her court to Papeete and made it her capital in the late 1820s, and the town grew into a major regional shipping and transportation center. [Kay, p102] Papeete was retained as Tahiti's capital after took control of the Tahitian Islands and made them a protectorate in 1842. [Kay, p106] was imprisoned in Papeete in 1842; his experiences there became the basis for the novel "". [Kay, p108] journeyed to and toured Papeete in 1891 and, except for a two-year period in 1893-1895, never returned to France. [Kay, pp462-464] also spent time in Papeete in 1888. [Kay, p466] Half of Papeete was destroyed by a major fire in 1884, which then prohibited the use of native building materials. [Kay, p106] A major cyclone caused extensive damage to the city in 1906, and a French naval vessel was sunk in the harbor in October 1914 by two German men-of war, which bombarded Papeete. [Kay, p106] [http://query.nytimes.com/gst/abstract.html?res=9902E0D8143EE033A2575BC0A9669D946596D6CF]

The growth of the city was boosted by the decision to move the nuclear weapon test range from to the atolls of and , some 1,500 km at the east of Tahiti; this originated in particular in the construction of the Faa'a airport next to Pape'ete, the only international airport in French Polynesia. In , built the here because of the large number of members in the region. On , the government of conducted the first of the last series of nuclear test detonations off the shores of . A resulting riot in Papeete lasted for two days and damaged the international airport, injured 40 people, and scared away tourism for some time. [ [http://query.nytimes.com/gst/fullpage.html?sec=travel&res=9A0DE2DA1239F93BA35753C1A963958260&n=Top%2fReference%2fTimes%20Topics%2fSubjects%2fN%2fNuclear%20Tests"New York Times" coverage of Atomic tests resumption in Tahiti] ] [ [http://select.nytimes.com/gst/abstract.html?res=F6061FF838580C748CDDA00894DD494D81&n=Top%2fReference%2fTimes%20Topics%2fSubjects%2fN%2fNuclear%20Tests"New York Times" coverage of riot at Tahiti's international airport] ] (Similar rioting occurred after another French nuclear test in the same area in ).

Traveling tourists arrive and depart Papeete via at Papeete Harbor or domestic airline at , which was completed and opened in 1962.

Primary roads consist of the 3-lane "Boulevard Pomare" along the city's harbor front which extends into a 4-lane highway.

*"Heiva" festival (proposed)
*Tahiti Manava Visitors Bureau
*The waterfront esplanade
*Bougainville Park (once named , in honor of a former Belgian king and World War One hero, is now named for , the first French explorer to circumnavigate the globe.
*Cathedral of Notre Dame of Papeete
*Temple de Paofai
*The Territorial Assembly is the heart of the Polynesian government and contains the Territorial Assembly building, the High Commissioner's residence and also a once popular clubhouse of Paul Gauguin. It was also once the site of the royal residence and palace of Queen of Tahiti, who ruled from 1827 to 1877.
*Gaston Flosse's presidential palace
*The Monument to Pouvanaa a Oopa (a decorated World War One hero, Tahitian nationalist, and deputy to Paris for the Tahitian Territorial Assembly)
*The Mairie (town hall)

*Papeete is mentioned in the song Southern Cross by .

The name Papeete is sometimes spelled "Pape‘ete" in Tahitian, using the to represent the , as promoted by the "Académie Tahitienne" and accepted by the territorial government [http://www.farevanaa.pf/theme_detail.php?id=5] . Most often, however, this is omitted.