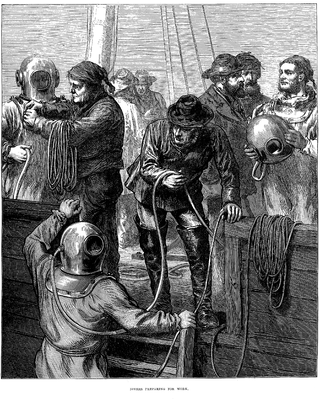 The standard diving dress was used from its invention in 1837 until replaced by the rise of scuba and other modern diving outfits in the 1960s. In this 1873 illustration from the Illustrated London News, we see the basic features of it: A helmet, supplied with air from the surface, and a waterproof suit. The helmet is screwed on to the suit with wingnuts, which can be seen being tightened by one of the support crew on the left of the picture.

A standard diving dress consists of a metallic (copper, brass or bronze) diving helmet, an airline or hose from a surface supplied diving air pump, a canvas diving suit, diving knife and boots.[1] An important part of the equipment is the addition of lead weights, generally on the chest, back and boots, to counteract the buoyancy of the helmet and diving suit.

This type of diving equipment is also known as hard-hat equipment or a "John Brown" rig, so-called after the British company that built many of the helmets. In the United States, it is sometimes known as a "Diver Dan" outfit, from the television show of the same name. It was commonly used for underwater civil engineering, commercial diving and naval diving.

From the late 1800s and throughout most of the 20th century, most Standard Dresses consisted of a solid sheet of rubber between layers of tanned twill. Their thick vulcanized rubber collar is clamped to the corselet making the joint waterproof. The inner collar (bib) was made of the same material as the dress and pull up inside the corselet and around the diver's neck. The wrist cuffs are also made of vulcanized rubber. The twill was available as heavy, medium, and light with the heavy working best against rough surfaces like barnacles and rocks. Three sizes were available; however, there was only one size corselet. Different types of dress are defined by the clamping of the outer collar clamps to the corselet. The legs are laced to prevent gas from getting trapped in the legs and dragging the diver to the surface.[2]

In 1405, Konrad Kyeser describes a diving dress that is made of a leather jacket and metal helmet with two glass windows. The jacket and helmet were lined by sponge to "retain the air" and a leather pipe was connected to a bag of air.[3]

The first design for a diving dress to be printed in a book was by Vegetius in 1511.[4]

Borelli published a dress that consisted of self-contained underwater breathing apparatus consisting of a metal helmet, a pipe to "regenerate" air, a leather suit, and a means of controlling the diver's buoyancy.[5]

Klingert designed a full diving dress in 1797. This design consisted of a large metal helmet and similarly large metal belt connected by leather jacket and pants.[7]

A diving helmet was designed by Charles Anthony Deane, a ship's caulker, in 1820 in England. The patent was sold to his employer Edward Barnard. It was originally intended as a fire fighter's breathing apparatus, but was not well received and underwater use was an after thought.[8]

In 1825, the first self-contained diving dress with a compressed air source was designed by William H. James. The helmet was a "thin copper or sole of leather" with a plate window. The air was supplied from an iron reservoir.[9]

In 1837, Augustus Siebe designed a suit where the helmet was sealed to the suit making the suit watertight.[10][11] The helmet could not flood no matter how the diver moved, resulting in safer and more efficient underwater work.

When Augustus Siebe died in 1872, he left his business to his son and his son-in-law and the firm became known as Siebe Gorman.[11] It continued until 1999.

The overall design of the helmet and dress changed little over the years until superseded in the 1950s with the Aqua-Lung being adapted to surface supplied air, known as hookah. The Aqua-Lung is now called scuba. The modern fiberglass helmet and other lightweight designs now fill the role. Helmets are used primarily for commercial and industrial purposes which includes special uses such a deep saturation diving.

The standard diving dress has been used to depths of 600 feet of sea water. Air comes from hand pumps, compressors, and banks of high pressure storage cylinders. Some models were autonomous, with built-in rebreathers or compressed gas supplies. A diving helmet is described by the number of bolts which hold it to the dress, and the number of vision ports, known as lights. For example a helmet with four vision ports, and twelve studs securing the dress, would be known as a "four light, twelve bolt helmet". When the telephone was invented, it was applied to the diving dress. The helmet diver remains dry and has a dry head, a big advantage during long dives.

In the diving helmet, a principle similar to that of the wet diving bell is used, where compressed air is provided to the helmet.[1] The air lets the diver breathe normally and equalizes his internal pressure with the water pressure outside. The helmet must have a non-return valve at the rear air input port of the helmet, to prevent massive and fatal squeeze, should the air line be cut at the surface. Diving helmets, while very heavy, displace a great deal of water and combined with the air in the dress, would make the diver float with his head out of the water.[12] To overcome this, some helmets are weighted, while other divers wear weighted belts which have straps that go over the base of the helmet. The diver may have an air inlet control valve, while others may have only one control, the exhaust.

A full diving dress can weigh over 80 kilos. Helmet diver's boots have canvas or leather uppers, and soles of iron, brass or lead.

While Siebe Gorman became the standard from which all helmets developed, the U.S. Navy Mk V helmet of 1914, has become the iconic helmet. Diving helmets were made all over the world. However, in the traditional form are still used to a limited extent. They are now primarily used by historical divers and collectors.

Helmet divers are subject to the same pressure limitations as other divers, such as decompression sickness and nitrogen narcosis.[13]