Council of the Baltic Sea States

Council of the Baltic Sea States 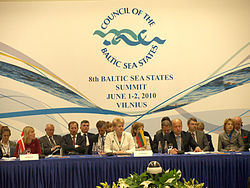 The Council of the Baltic Sea States (CBSS) is an overall political forum for regional intergovernmental cooperation which addresses the five priority areas of the environment, economic development, energy, education and culture, civil security and human dimension, including trafficking in human beings.

The CBSS was established by the region’s Foreign Ministers in Copenhagen in 1992 as a response to the geopolitical changes that took place in the Baltic Sea region with the end of the Cold War. Since its founding, the CBSS has contributed to ensuring positive developments within the Baltic Sea region and has served as a driving force for multi-lateral co-operation.

Since 1998 the CBSS has been serviced by a permanent international Secretariat that is located in Stockholm, Sweden and funded by the Member States.

As of 1998, a permanent Secretariat has been established in Stockholm. The highest institution of CBSS is the conference of foreign ministers, which convenes every two years.

The CBSS has 12 member states:

Other countries have observer status:

The Committee of Senior Officials (CSO) consists of high ranking representatives of the Ministries of Foreign Affairs of the 11 CBSS Member States as well as of the European Commission. The CSO serves as the main discussion forum and decision-making body for matters related to the work of the Council between Ministerial Sessions. The CSO monitors, facilitates and aims to coordinate the work of all CBSS structures.

A number of CBSS structures are operating under the auspices of the CSO. The CBSS is currently undergoing a reform. In accordance with the Riga Declaration on the Reform of the CBSS from June 2008 one of the former working groups has been transformed into an Expert Group and the two other working groups have been dissolved.

A Permanent International Secretariat of the CBSS was established following a decision taken at the 7th Ministerial Session of the CBSS in 1998 in Nyborg, Denmark. The Secretariat was officially inaugurated at its premises on the island of Strömsborg in Stockholm on 20 October 1998.

The mandate of the Secretariat is as follows: