Abu Dhabi International Airport (Arabic: مطار أبو ظبي الدولي‎) (IATA: AUH, ICAO: OMAA) is an airport in Abu Dhabi, the capital of the United Arab Emirates. The airport is one of the fastest growing airports in the world in terms of passengers (+34% in Q1:2008), new airline operators, and infrastructural development. The airport is now undergoing a major expansion, the total amount earmarked for projects is US$6.8 billion.

Abu Dhabi airport is the second largest in the UAE, serving 11 million passengers in 2010. Its terminal spaces are dominated by Etihad Airways which is the United Arab Emirates' second largest air carrier after Emirates.

The newest terminal, Terminal 3, opened in January 2009, enabling the airport to handle, approximately, 12 million passengers per annum. It is expected that passenger numbers will reach this level in 2011.

The expansion masterplan projects include a second 4,100 m parallel runway 2 km from the existing runway (already operational as of 2009); a new 110 metre tower between the two runways with the new Air Traffic Control centre; the new Midfield Terminal (the main building and centre-piece of the new airport) which is set for first phase completion in 2014; enhanced cargo and maintenance facilities and other commercial developments on the land immediately adjacent to and north of the existing airport.

The Midfield Terminal, when opened, will handle up to 20 million passengers per year, with options for this to double in capacity to 40 million. An additional facility is also under consideration that would take the capacity to 50 million.

The new Terminal 3, opened in January 2009,[1] a UAE Dirhams 1 billion (US$ 271.9 million) interim facility, is to cater to the airport's passenger growth before the opening of the Midfield Terminal. Used predominantly by Etihad Airways, the terminal boosted the airport's seven million passenger per year capacity to 12 million. The new Terminal 3 also added 10 new gates at the airport, two of which are Airbus A380 compatible.

The airport handled more than 10 million passengers in 2010.

Terminal 2 is capable of handling up to two million passengers per year. It was built as a solution to air traffic volumes which have outgrown the existing terminal.

The project will provide a home base for the UAE's national carrier, Etihad Airways, which will be a major user of new cargo facilities with an ultimate handling capacity of around two million tonnes of freight a year. Close to the new cargo facilities land has been allocated for commercial activities, business parks and property developments. Aircraft maintenance facilities will continue to be concentrated on the south side of the existing airport. The plan also sets aside land for the growth of other operators such as Royal Jet and Abu Dhabi Aviation. One of the first phases of the project will be the construction of a second 4,100 metre runway which will cater for the latest generation of aircraft, including the new Airbus A380, the world’s largest passenger aircraft.

Among other aspects of the project, when completed, are the design of remote aircraft stands complete with airfield ground lighting and hydrant fuel. 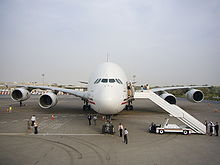 An A380-800 painted in Etihad colours at Abu Dhabi International Airport. The airline has not yet received its ordered aircraft. 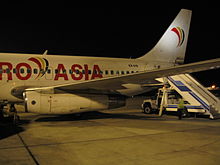 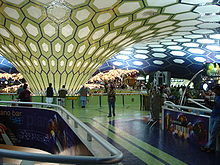 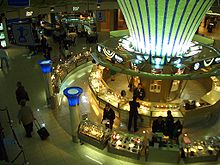 The interior of Terminal 1 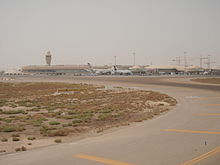 The exterior of the airport seen from the runway

Notes:
^1 Cathay Pacific service HKG to AUH continues onto Jeddah, however they don't have rights to carry passengers between AUH and JED.