State of Slovenes, Croats and Serbs

The State of Slovenes, Croats and Serbs was a short-lived state formed from the southernmost parts of the Austro-Hungarian monarchy after its dissolution at the end of the World War I by the resident population of Slovenes, Croats, and Serbs. The state was internationally unrecognized.[1]

Serbs referred to in the state's name were those resident in Bosnia and Herzegovina, Croatia-Slavonia (including Syrmia), and Dalmatia (including Boka Kotorska and Montenegrin Littoral up to Spič near Bar), not the population of the Kingdom of Serbia (which included the territory of the present-day Republic of Macedonia), nor the Serbs in Kingdom of Montenegro and Vojvodina region (including Banat, Bačka and Baranja) as those territories were not included in the short lived state.[2][3] 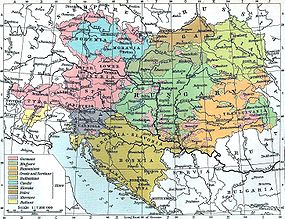 "Distribution of Races in Austria–Hungary" from the Historical Atlas by William R. Shepherd, 1911, showing areas mainly inhabited by Slovenes, Croats, and Serbs. Most of those territories were included in the State of Slovenes, Croats and Serbs.

In the final year of World War I, the Austro-Hungarian Monarchy was suffering from an internal crisis caused by the unrest amongst its numerous Slavic populations.[4] At the time, the South Slavic peoples were divided between various subdivisions of the Monarchy:

The Yugoslav parliamentary club, consisting of South Slavic deputies in the Reichsrat, the parliament of Cisleithania, initiated activities to strengthen the pro-Yugoslav forces in the Transleithanian Kingdom of Croatia-Slavonia. In early March 1918, a grass roots meeting was held in Zagreb with representatives of various aspects of public life as well as several political parties, led by Mile Starčević's Party of Rights and the Slovene People's Party,[5] but notably excluding the ruling Croat-Serb Coalition or the opposition Croatian People's Peasant Party. This group brought forward a joint resolution that proclaimed the unity of the people of Slovenes, Croats and Serbs (a "unified nation" with the latter described as equal "tribes" whose peculiar historical positions and desires are to be accommodated), demanded a right of self-determination, and the entire territory they occupied, including the whole of eastern Adriatic (Cisleithania at the time).[4]

In July and August 1918, the People's organizations of Slovenes, Croats and Serbs were formed in Split (for Dalmatia), Sušak (for the Croatian Littoral) and Ljubljana (for the Slovene lands), which aimed to advance these policies in practice. The opposition parties in Croatia-Slavonia then met again in Zagreb in late August to discuss how to proceed, in particular how to get the Croat-Serb Coalition to join them.[4]

On September 14, 1918, Austro-Hungarian Foreign Minister Burián had issued a statement advocating a peace treaty, and it was apparent that the war was coming to an end. By early October 1918, the Slovene-Croat-Serb movement planned to set up a National Assembly, and one of the leaders of this movement Srđan Budisavljević was confronted by Svetozar Pribićević, the leader of the Croat-Serb Coalition, in an effort to determine whether these efforts were meant to undermine the Coalition. The two came to an understanding, and the Coalition would be formally invited to the future National Council before the National Assembly was formed. At the same time, the organizers obtained support from the Croatian People's Peasant Party as well as the Serb People's Radical Party. On October 5 and 6, they held an initial assembly and started with formation of executive committees, apportioning seats to members of all parties,[5] causing some acrimony over the ad hoc nature of the proceedings.[4]

Numerous meetings were held in October, coinciding with the Emperor Karl's proclamation of a Manifesto on federalization of Cisleithania, that was dismissed by the group. On October 28, Gyula Andrássy the Younger sent a peace note to Washington, and the same day the Ban of Croatia Antun Mihalović reported to the Emperor, who dismissed him saying "Do as you please". The Ministry of War had also decided to allow the local military commands to approach the people's councils in order to help maintain law and order. All this was taken as a sign that the Monarchy was disappearing and that the State of the Slovenes, Croats and Serbs is an attainable goal.[4] 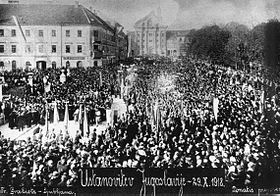 Proclamation of the State of Slovenes, Croats and Serbs on the Congress Square in Ljubljana, October 29th 1918

The state was officially formed on 29 October 1918. Its governing body was the National Council (Narodno vijeće). The president was a Slovene, Anton Korošec. The two vice presidents were a Serb, Svetozar Pribićević, and a Croat, Ante Pavelić (politician born 1869).

The aspirations of the new state were to include all territories of the former Austria-Hungary that were inhabited by Slovenes, Croats, and Serbs. However, the Serbs in Vojvodina (including the Banat, Bačka, and Baranja regions) objected to this and formed their own administration under the supreme authority of the Serbian National Board in Novi Sad. Vojvodina then joined the Kingdom of Serbia on 25 November 1918. One day before this, on 24 November 1918, the region of Syrmia, which at first was part of the State of Slovenes, Croats and Serbs, had seceded from the state and also joined the Kingdom of Serbia.[2][3]

In order to avoid handing the navy to the Entente Powers, the Austrian Emperor gave the entire Austro-Hungarian Navy and merchant fleet, including all harbours, arsenals, and shore fortifications, to the National Council of the state. The National Council sent diplomatic notes to the governments of France, the United Kingdom, Italy, the United States, and Russia to notify them that the state was not at war with any of them and that the council had taken over the entire Austro-Hungarian fleet. The fleet, however, was soon attacked and dismembered by the Italian Regia Marina. 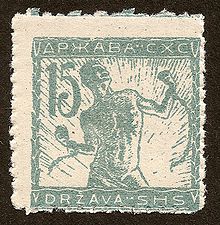 The verigar, designed by Ivan Vavpotič for the state's only postal stamp issue, became one of the symbols of the short-lived State of Slovenes, Croats and Serbs.

Austria-Hungary reached an armistice with Italy through the Armistice of Villa Giusti signed on November 3, 1918. This agreement stipulated that Italy could occupy large parts of the territory included in the State of Slovenes, Croats and Serbs. Italian troops occupied Istria and much of Dalmatia. This occupation lasted until 1921, when the Treaty of Rapallo came into effect.

The State did not obtain international diplomatic recognition before it ceased to exist. On 1 December 1918, the National Council joined the state with the Kingdom of Serbia (which also included the territory of former Kingdom of Montenegro within its borders) to form the Kingdom of Serbs, Croats, and Slovenes.