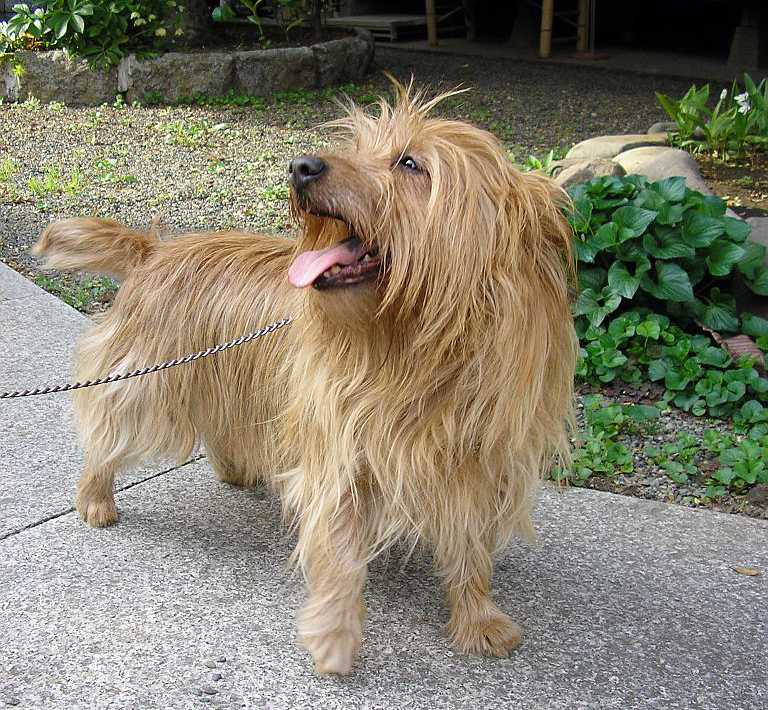 The Australian Terrier is a small breed of in the family.

The Australian Terrier stands around 25 centimeters high at the and weighs around 7 kilograms. It is a low-set dog; the length of its body is longer than its height at the withers. The Aussie has a high-set tail that is now not docked in Australia.

The head of the Australian Terrier is elongated, with a slight and pricked ears. The describes the dog's look as "hard bitten" and "rugged". The eyes are small, dark, and oval and must have a keen terrier expression. The leather of the nose runs up to the bridge of the muzzle, which is described as "strong".

The dog's coat is rough or harsh to the touch, with a soft and a distinctive ruff around the neck. Australian Terriers shed little hair. The breed standard specifies that it should be untrimmed, but some prefer to neaten the dog for the show ring. Acceptable colors are blue and tan, red or sandy.

The Australian Terrier has medium sized triangular ears which are very flexible. The ruff around the neck complements its appearance. It is a great companion dog.

There are three completed health surveys for Australian Terriers.

Among 619 living dogs in the 2002 Australian Terrier Club of America survey, the most commonly reported health problems were endocrine (primarily diabetes), allergic dermatitis, and musculoskeletal (primarily luxating patella and ruptured cranial cruciate ligament). Other conditions reported among more than 4% of the surveyed dogs were adult onset cataracts and ear infections. The much smaller 2004 UKC survey, with 28 living dogs, suggested similar health concerns.

The Australian Terrier was the first Australia-bred Australian dog to be shown, and the first to be recognized overseas. Its origins are uncertain, but its immediate ancestor was without doubt developed in the United Kingdom in the early 1800s from the precursors of today's British and Scottish terriers. Some of these breeds are now extinct, but the Aussie likely has a mixed ancestry comprising the same dog types that produced today's Yorkshire, Dandie Dinmont, Manchester, Irish, and Cairn terriers.

A new rough-coated terrier was evident in Australia by the late middle-nineteenth century; the selectively-bred terrier was used for rodent and snake control, as a , and occasionally as a .

The Australian Terrier was recognized by the in 1969.