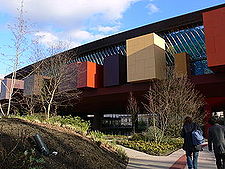 The Musée du quai Branly (French pronunciation: [my.ze dy ke bʁan.li]), known in English as the Quai Branly Museum, nicknamed MQB, is a museum in Paris, France that features indigenous art, cultures and civilizations from Africa, Asia, Oceania, and the Americas. The museum is located at 37, quai Branly - portail Debilly, 75007 Paris, France, situated close to the Eiffel Tower. The nearest métro and RER stations are Alma – Marceau and Pont de l'Alma. It is named after its location which in turn is named after the physicist Édouard Branly.

A commission was established to study the feasibility of building the museum in 1995. When the study was concluded, land was reserved near the Eiffel Tower for the future museum. The curved site on the edge of the Quai Branly and the Seine is situated 100 metres from the Eiffel Tower. The site was previously selected to accommodate the Centre International de Conferences, an abandoned Grand Projet of François Mitterrand.[1] French President Jacques Chirac was a very influential proponent of the project. Quai Branly opened on June 23, 2006. For the whole story of the MQB (and the introduction of "primitive art" to the Louvre Museum), see Paris Primitive: Jacques Chirac's Museum on the Quai Branly by Sally Price (2007).

The building was designed by architect Jean Nouvel. The "green wall" (200m long by 12m high) on part of the exterior of the museum was designed and planted by Gilles Clément and Patrick Blanc. At installation this was quite healthy and vibrant; however, in winter, the direct exposure of the plants to north winds blowing over the open expanse of the Seine river causes regular frost damage even though the support system for the plants' roots, irrigation and drainage has proved to be perfectly adequate on the less exposed east facade of the building and in other places in Paris where it is used (BHV Homme 38, rue de la Verrerie, etc...[1]). The museum complex contains several buildings, as well as a multimedia library and a garden. The museum's frontage facing onto quai Branly features very tall glass panelling which allows its interior gardens to be remarkably quiet only metres from the busy street in front of them. 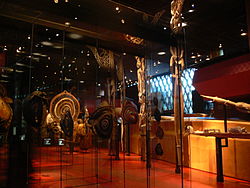 View of its African exhibits

The museum contains the collections of the now-closed Musée national des Arts d'Afrique et d'Océanie and the ethnographic department of the Musée de l'Homme. The museum contains 267,000 objects in its permanent collection, of which 3,500 items from the collection are on display. A part of it is now exhibit at the Pavillon des Sessions of the musée du Louvre, where the master pieces are such as "l'homme de fer".

The museum has also an important library with 3 main departments :

The library has collections from important ethnologists such as Georges Condominas, Françoise Girard, Nesterenko, or art trader such as Jacques Kerchache.

Stéphane Martin, the director of the Quai Branly museum, has recently been involved in controversy over the return of Maori warrior heads held in France. The controversy arose after a museum in Normandy decided to return a tattooed head of a Maori warrior to New Zealand. Since 1992, the Te Papa Tongarewa, New Zealand's national museum, has requested the return of Maori remains held around the world and which were a result of international artefact trafficking. However, Christine Albanel, the culture minister, stepped in to prevent the return of human remains to the relevant tribe in New Zealand. Mr Martin has boasted of holding four Maori heads in the collection and has refused to return these to the New Zealand tribes for proper burial, stating that “They are stored in a very special area, and absolutely will not be put on public display”. Nevertheless, this goes against France’s bioethics law, which states that a body part must be returned to its place of origin.[citation needed]

Quai Branly has also received criticism for a perceived reliance in its exhibitions on visual appeal and theatrics, as opposed to explanation and context. [2]

Australian Art Market Report Issue 23 Autumn 2007 Pages 32–34: "Twelve months after the opening of Musée du quai Branly in Paris, journalist Jeremy Eccles takes a look at what effect, if any, the museum" (where contemporary Aboriginal art forms an integral part of the architectural structure) " has had on .... Aboriginal art"

In this article, he quotes Bernice Murphy - co-founder of the Sydney MCA and now National Director of Museums Australia and Chair of the Ethics Committee of the International Council of Museums. She told a Sydney symposium on 'Australian Arts in an International Context' that she found the whole of Quai Branly to be a "regressive museology" and the presentation of Aboriginal art "in a vegetal environment" to be "an exotic mise en scène" in the worst taste. "It can't be decontextualised into a glorious otherness".

On more general terms, discontent with the MQB is based on its blunt disdain for the post-colonial reinterpretation of Western history which has developed since the 1970s and which has ultimately affected museums and changed curatorial practices. [3]