The Appalachian dulcimer (or mountain dulcimer) is a fretted string instrument of the zither family, typically with three or four strings. It is native to the Appalachian region of the United States. The body extends the length of the fingerboard, and its fretting is generally diatonic.

Although the Appalachian dulcimer first appeared in the early 19th century among Scots-Irish immigrant communities in the southern Appalachian Mountains, the instrument has no known precedent in Ireland or Scotland.[citation needed] However, several diatonic fretted zithers exist in Continental Europe that have a strong similarity to the dulcimer. Jean Ritchie and others[citation needed] have speculated the Appalachian dulcimer is related to similar European instruments like the langeleik, scheitholt and épinette des Vosges.

Charles Maxson, an Appalachian luthier from Volga, WV, speculated that early settlers were unable to make the more complex violin in the early days due to lack of tools and time. This was one of the factors which led to the building of the dulcimer, which has less dramatic curves. He too cited the langeleik, scheitholt and épinette des Vosges as ancestor instruments. He built at least one of each.

Few true specimens of the mountain dulcimer exist from earlier than about 1880, when J. Edward Thomas of Knott County, Ky began building and selling them. The instrument became used as something of a parlor instrument, as its modest sound volume is best-suited to small home gatherings. But for the first half of the 20th century the mountain dulcimer was rare, with a handful of makers supplying players in scattered pockets of Appalachia. Virtually no audio recordings of the instrument exist from earlier than the late 1930s.

The Appalachian dulcimer achieved a renaissance in the 1950s urban folk music revival in the United States through the work of Jean Ritchie, a Kentucky musician who introduced the instrument to New York City audiences.[citation needed] In the early 1960s, Ritchie and her partner George Pickow began distributing dulcimers made by her Kentucky relative Jethro Amburgey, then the woodworking instructor at the Hindman Settlement School. They eventually began producing their own instruments in New York City. Meanwhile, the American folk musician Richard Fariña (1937–1966) was also bringing the Appalachian dulcimer to a much wider audience, and by 1965 the instrument was a familiar presence in folk music circles.

In addition to Amburgey, by then winding down his production, influential builders of mid-1960s included Homer Ledford, Lynn McSpadden, A. W. Jeffreys and Joellen Lapidus. In 1969 Michael and Howard Rugg formed a company called Capritaurus. As well as being the first to mass-produce the instrument, they made design changes to make it both easier produce and to play. The body was made larger, and they installed guitar tuners to make tuning easier for players. This became known as the "California style" dulcimer.

The traditional way to play the instrument is to lay it flat on the lap and pluck or strum the strings with the right hand, while fretting with the other. The dulcimer may also be placed in a similar position on a piece of furniture, such as a table or chest of drawers, to enhance the sound. There are two predominant methods of fretting. First, the strings may be depressed with the fingertips of the fretting hand. Using this technique, all the strings may be fretted, allowing the player to produce chords. Second, the melody string, the string closest to the player, may be depressed with a "noter," typically a short length of dowel or bamboo (see photo at left). Using this method, only the melody string is fretted and the other strings act as drone strings (the melody string may be doubled, so that the melody can be better heard over the drones). In this second style of playing, the combination of the drone strings and the buzz of the noter on the melody strings produces a unique sound.

In practice, a wide variety of playing styles have long been used. Jean Ritchie's The Dulcimer Book[1] has an old photograph of Mrs. Leah Smith of Big Laurel, Kentucky, playing the dulcimer with a bow instead of a pick, with the tail of the dulcimer held in the player's lap, and the headstock resting on a table pointing away from her. In their book In Search of the Wild dulcimer,[2] Robert Force and Al d'Ossché describe their preferred method as "guitar style": The dulcimer hangs from a strap around the neck, and the instrument is fretted and strummed like a guitar. They also describe playing "autoharp style" where "the dulcimer is held vertically with the headstock over the shoulder." Lynn McSpadden, in his book Four and Twenty Songs for the Mountain Dulcimer,[3] states that some players "tilt the dulcimer up sideways on their laps and strum in a guitar style." Still other dulcimer players use a fingerstyle technique, fingering chord positions with the fretting hand and rhythmically plucking individual strings with the strumming hand, creating delicate arpeggios.

Contemporary players have also borrowed from chord theory and guitar analogues to create a variety of more complex ways to play the dulcimer. Some dulcimers are constructed with four equidistant strings to facilitate playing more complex chords, particularly for playing jazz. In another line of contemporary innovation, electric dulcimers have been used in rock music. The Appalachian dulcimer is both easy to learn to play, and capable of complexity, providing scope for a wide range of professionals and hobbyists.[citation needed]

The frets of the Appalachian dulcimer are typically arranged in a diatonic scale. Traditionally, the Appalachian dulcimer was usually tuned to DAA, or notes with this I V V relationship.[4] That is, the key note is on the bass string and the middle and melody strings are at an interval of a perfect fifth above it. The melody string is tuned so that the key note is at the third (diatonic) fret. This facilitates playing melodies in the Ionian mode (the major scale). The melody is played on the top string (or string pair) only, with the unfretted drone strings providing a simple harmony, giving the instrument its distinctive traditional sound. To play in a different key, or in a different mode, a traditional player would have to retune the instrument. For example, to play a minor mode melody the instrument might be tuned to DAC. This facilitates playing the Aeolian mode (the natural minor scale), where the scale begins at the first fret. 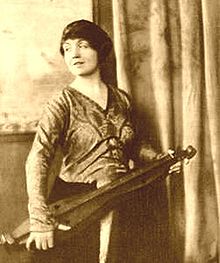 A photo from the May 1, 1917, issue of Vogue, featuring an Appalachian dulcimer.

Modern instruments usually include an additional fret, a half step below the octave position, the so-called "six and a half" fret. This enables one to play in the Ionian mode when tuned to DAD, the traditional tuning for the Mixolydian mode, where the scale starts on the open fret. This arrangement is often found to be more conducive to chordal playing, as opposed to the more traditional dronal style. Among modern players, it is fair to say that the instrument is most commonly tuned to DAD.[citation needed] So-called "chromatic dulcimers," with twelve frets per octave, are sometimes made, to permit playing in any key without re-tuning.

While the most common current tuning is DAD, it is often easier for the beginning player to tune to DAA or the so-called "Reverse Ionian" tuning, DGD. "Reverse" tunings are ones in which the key note is on the middle string and the bass string is the fifth of the scale, but in the octave below the middle string. This is sometimes[by whom?] suggested as an easier tuning. From DGD one can put a capo on the first fret to play in the Dorian mode, or retune the second string (to A), to play in the Mixolydian mode, then from Mixolydian, capo the first fret to play in the Aeolian mode. DAA tuning should not be thought of as simply a "beginner's" tuning, however. Many accomplished, innovative players use this tuning.[citation needed]

The Appalachian dulcimer is now a core instrument found in the American old-time music tradition. But styles performed by modern dulcimer enthusiasts run the gamut from traditional folk music through popular and experimental forms, although most perform in more-or-less traditional styles. Some players exploit its similarity in tone to certain Middle Eastern and Asian instruments. Increasingly, modern musicians such as Lindsay Buckland, Bing Futch, Butch Ross, Cristian Huet in France and Quintin Stephens have contributed to the popularity of the solid-body electric dulcimer. Dulcimer festivals take place regularly in the United States, Canada, the United Kingdom, and Ireland, as the Appalachian dulcimer has achieved a following in a number of countries.[citation needed]

Though the mountain dulcimer has long been associated with the elder generation, it has gradually attracted a number of younger players who have discovered its charms. Due to its ease of play, many music teachers consider it to be an especially good educational instrument.[citation needed] Because of this, they are often used in educational settings, and some music classes make their own dulcimers. However, because of budget, time, and craftsmanship skill issues, these are usually made from cardboard.

One of the most famous players of the Appalachian dulcimer is, perhaps, folk singer Joni Mitchell, who has been playing it since the late 1960s on studio recordings (for instance on her famous album Blue (1971)) and also in live concerts.[5] Cyndi Lauper is also a high-profile mountain dulcimer player, having studied with the late David Schnaufer. Lauper plays dulcimer on her ninth studio album The Body Acoustic, and the tour to support the record featured her performing songs like "Time After Time" and "She Bop" solo on the mountain dulcimer. Contemporary professional musicians who view the dulcimer as their primary instrument include Stephen Seifert of Nashville, TN and Aaron O'Rourke of Tallahassee, FL.

As a folk instrument, wide variation exists in Appalachian dulcimers. 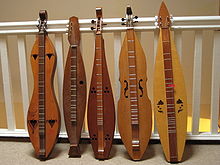 A variety of dulcimer shapes. 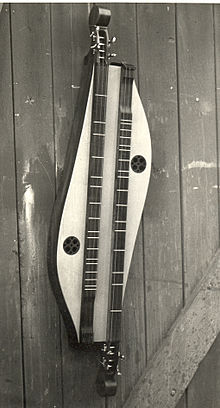 Appalachian dulcimers are often made by individual craftsmen and small, family-run businesses located in the American South and particularly in Appalachia. Cheap imports from Romania, Pakistan and China are slowly making inroads into the American market.[9] John Bailey's book, Making an Appalachian Dulcimer,[10] is one of several still in print that provide instructions for constructing a dulcimer.