The Minister for Finance (Irish: An tAire Airgeadais) is the title held by the Irish government minister responsible for all financial and monetary matters. The office-holder controls the Department of Finance and is considered one of the most important members of the Government of Ireland.

The current Minister for Finance is Michael Noonan, TD. He is assisted by:

The department and minister are occasionally called the Irish Exchequer (or simply Exchequer, or in Irish Státchiste); a term previously used under the Chancellor of the Exchequer of Ireland. 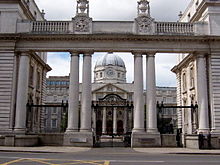 Government Buildings, Dublin, is the location of the Department of Finance

The Minister for Finance holds the second most important ministerial position in the Irish Cabinet after that of the Taoiseach. He or she is in charge of the Department of Finance responsible for all financial matters in the Republic of Ireland. Due to the importance of the cabinet post, the Minister for Finance must be a member of Dáil Éireann. Many Ministers who have held the Finance portfolio have gone on to become Taoiseach, including Jack Lynch, Charles Haughey, Albert Reynolds, John Bruton, Bertie Ahern and Brian Cowen.

One of the most important aspects of the Minister's work is the creation of the annual Budget which is announced to the Dáil in a speech, usually delivered on the first Wednesday of December (although this date may be changed; for instance, the 2009 Budget was delivered to the Dáil on Tuesday, 14 October 2008, due to the rapidly deteriorating state of Ireland's public finances at the time). In the Budget the Minister details the Government's spending programme for the coming year. The Budget consists of:

The asterisk (*) indicates Ministers who held both the Finance and Public Service portfolios at the same time.