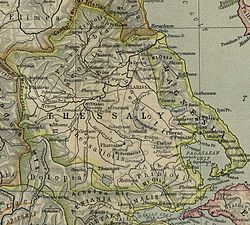 Thessaly was home to an extensive Neolithic culture around 2500 BC. Mycenaean settlements have also been discovered, for example at the sites of Iolcos, Dimini and Sesklo (near Volos). Later, in ancient Greek times, the lowlands of Thessaly became the home of baronial families, such as the Aleuads of Larissa or the Scopads of Crannon. These baronial families organized a federation across the Thessaly region, later went on to control the Amphictyonic League in northern Greece. The Thessalians were renowned for their cavalry.

In the summer of 480 BC, the Persians invaded Thessaly. The Greek army that guarded the Vale of Tempe evacuated the road before the enemy arrived. Not much later, Thessaly surrendered. The Thessalian family of Aleuadae joined the Persians. In the Peloponnesian War the Thessalians tended to side with Athens and usually prevented Spartan troops from crossing through their territory with the exception of the army of Brasidas. In the 4th century BC Thessaly became dependent on Macedon. In 148 BC the Romans formally incorporated Thessaly into the province of Macedonia, but in AD 300 Thessaly was made a separate province with its capital at Larissa.

Thessaly remained as a part of the East Roman (Byzantine) Empire. In 395–397, as most of Greece, Thessaly was occupied by the Visigoths under Alaric, until they were driven out by Stilicho.[1] According to the Synecdemus, in the 6th century the province included 16 cities, including the islands of Skiathos, Skopelos and Peparisthos.[2] As with most of the Balkans, the area suffered from the Slavic incursions in the 6th–8th centuries: five of the regions cities disappeared after the 7th century, Slavic tribes settled in the northern and northeastern parts of the country, while large numbers of Vlach herdsmen settled in later centuries, eventually controlling large portions of the region (Great Wallachia).[2] Despite raids from the Bulgarians and Saracen pirates, the province recovered gradually after Byzantine control was firmly re-established by Nikephoros I: from the 9th century on, at least 9 new cities appear.[2][3] In 985, during his wars with Basil II, the Bulgarian tsar Samuel sacked the city of Larissa. The Bulgarian ruler undertook another large-scale expedition through the province and into the Peloponnese in 997, but he was defeated at the Battle of Spercheios.[4]

After the Fourth Crusade, in 1204–1205, it was conquered by the Latin Kingdom of Thessalonica. The area, partly overlapping with what was known as Great Wallachia, was liberated by Theodore Komnenos Doukas of the Despotate of Epirus in 1215. The region remained attached to the domains of Theodore and his successors in Thessalonica until 1239, when the deposed ruler of Thessalonica Manuel Komnenos Doukas conquered it from his nephew John Komnenos Doukas and secured its status as a separate section of the family holdings. His death in c. 1241 brought the area to the ruler of Epirus, Michael II Komnenos Doukas, on whose death in c. 1268 Thessaly became the holding of a distinct, illegitimate, branch of the family, under John I Doukas. The extinction of this branch in 1318 was followed by a continuation of local independence, in increasingly chaotic conditions. In the 1330s a new attempt to assert Epirote control resulted in a Byzantine invasion, which brought eastern, and then all Thessaly, under imperial control by 1335 or 1336. The Byzantine reconquest did not last long: the Byzantine civil war of 1341–1347 weakened the empire and enabled the Serbians to conquer most of Byzantium's provinces. Thessaly fell in 1348, with the local nobility recognizing the authority of the expansionist Serbian emperor Stefan Dušan. The deaths of Dušan and his governor Gregory Preljub in the winter 1355/1356 led to further unrest. Serbian authority was overthrown by Nikephoros Orsini but after his death in the Battle of Achelous in 1359, Thessaly became the center of the holdings of Dušan's half-brother Simeon Uroš, who reigned from Trikala and styled himself emperor of the Greeks and Serbians. This period of relative prosperity continued after the line of Serbian rulers ended in c. 1373, and the new rulers of Thessaly, the Angeloi Philanthropenoi, recognized Byzantine suzerainty until 1394, when the region was conquered by the Ottoman Empire.

The Ottomans first invaded Thessaly in 1386, when Gazi Evrenos took Larissa for a time, confining the Angeloi Philanthropenoi to their holdings in western Thessaly, around Trikala. In 1392/3, the second phase of the invasion began, again under Evrenos. The Ottomans defeated Manuel Angelos Philanthropenos, and retook Larissa. The conquest of Thessaly was completed during the next few years, from 1394 under the personal supervision of Sultan Bayezid I. The fortresses of Volos, Pharsala, Domokos and Neopatras were taken, and in 1395/6, Trikala too fell. After the disastrous Battle of Ankara in 1402 however, the weakened Ottomans were forced to return the eastern half of Thessaly to Byzantine rule, while the remainder reverted to virtual independence, and the two forts of Pteleos and Gardiki came under Venetian control. It was not until 1423 that Murad II reconquered Thessaly, installing Muslim settlers from the region of Iconium (who became known as "Koniars", Κονιάροι in Greek, from their place of origin) to secure his hold of the area. Turakhan Beg became the region's first Ottoman governor. Gardiki and Pteleos held out until 1470, when they were taken by the Ottomans.