Carolina Horsenettle (Solanum carolinense) is not a true nettle, but a member of the Solanaceae, or nightshade family. It is a perennial herbaceous plant, native to southeastern United States that has spread widely throughout North America. This plant has hard spines along the stems that can penetrate the skin and break off, causing much pain.

"Horsenettle" is also written "horse nettle" or "horse-nettle", though USDA publications usually use the one-word form. Though there are other horsenettle nightshades, S. carolinense is the species most widely known simply as "the horsenettle". It is also known as Radical Weed or Sand Brier (or "briar"), while more ambiguous names are "bull nettle", "tread-softly" and "apple of Sodom". Names like Devil's Tomato and particularly "wild tomato" are better avoided, as the fruits of Carolina Horsenettle are poisonous and may kill a human who eats of them. 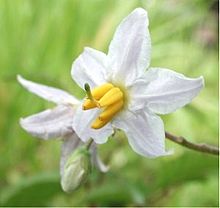 Leaves are alternate, elliptic-oblong to oval, and each is irregularly lobed or coarsely toothed. Both surfaces are covered with fine hairs. The flowers have five petals and are usually white or purple with yellow centers, though there is a blue variant that resembles the tomato flower. The fruits also resemble tomatoes. The immature fruit is dark green with light green stripes, turning yellow and wrinkled as it matures. Each fruit contains around 60 seeds. It flowers throughout the summer, from April to October.

Most parts of the plant are poisonous to varying degrees due to the presence of solanine which is a toxic alkaloid and one of the plant's natural defenses,[1] but while ingestion of the unripe fruit causes abdominal pain and may potentially cause circulatory and respiratory depression, the mature fruit is reputedly non-poisonous or less poisonous.

These plants can be found growing in pastures, roadsides, railroad margins, and in disturbed areas and waste ground. They grow to about 1 m tall, but are typically shorter, existing as subshrubs. They prefer sandy or loamy soils.

Carolina horsenettle is considered a noxious weed in several US states. It can spread vegetatively by underground rhizomes as well as by seed. It is resistant to many herbicides; in fact, herbicide use often selects for horsenettle by removing competing weeds. It is an especially despised weed by gardeners who hand-weed, as the spines tend to penetrate the skin and then break off when the plant is grasped. The deep root also makes it difficult to remove.

This plant is also seen as a beneficial weed: the ripe fruit of this plant contains relatively little solanine, and is cooked by herb doctors to use as a sedative or antispasmodic. The plant also provides ground cover for beneficial predatory beetles, making it potentially beneficial in gardens.

Solanum pumilum (as described by Michel Félix Dunal) was considered a variety hirsutum of the Carolina Horsenettle by D'Arcy and A. Gray. Several other varieties and forms of S. carolinense are not considered taxonomically distinct nowadays:[2]

Finally, there are some other junior synonyms used for this plant:[2]