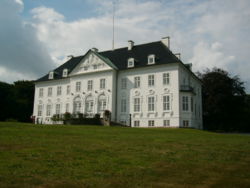 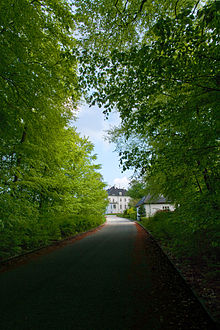 Marselisborg Palace, in Danish Marselisborg Slot, (Danish pronunciation: [mɑˈseːlisb̥ɒːˀ]) is a royal residence of the Danish Royal Family in Aarhus. It has been the summer residence of Queen Margrethe II since 1967.

Historically the 18th-century country house was the property of the Marselis family, originally of Hamburg, giving the seat its name, which signifies "Marselis Castle". Marselisborg became a royal residence when Prince Christian and his consort Princess Alexandrine were given the Palace in 1898 as a wedding present from the people of Denmark. As such the palace is the property of the Kingdom of Denmark, and will remain in possession of all future monarchs of Denmark. The royal couple used it as their summer residence. The building was rebuilt by the Danish architect Hack Kampmann. The present Queen, Margrethe II, was given the palace by her father, King Frederick IX in 1967. Margrethe and her consort Henrik also used the palace as their summer residence. Until this day the residence is used during the summer, as well as during the Easter and Christmas holidays.

The palace is surrounded by a 32-acre (130,000 m2) park. The park was designed by architect L. Christian Diedrichsen who was commissioned to design the gardens in traditional English landscape style. The gardens feature large sweeping lawns surrounded by trees, small ponds, shrub-covered slopes, a rose garden and a herb garden. When the Queen and her family are in residence at the palace, a changing of the guard ceremony takes place at noon. The park and gardens are both open to the public while the Queen and royal family are not in residence, whereas the palace itself is never open to the public.[1]