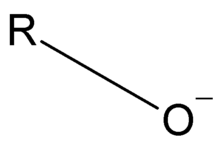 The structure of a typical alkoxide group.

An alkoxide is the conjugate base of an alcohol and therefore consists of an organic group bonded to a negatively charged oxygen atom. They can be written as RO−, where R is the organic substituent. Alkoxides are strong bases and, when R is not bulky, good nucleophiles and good ligands. Alkoxides, although generally not stable in protic solvents such as water, occur widely as intermediates in various reactions, including the Williamson ether synthesis. Transition metal alkoxides are widely used for coatings and as catalysts.[1][2]

Enolates are unsaturated alkoxide derived by deprotonation of a C-H bond adjacent to a ketone or aldehyde. The nucleophilic center for simple alkoxides is located on the oxygen, whereas the nucleophilic site on enolates is delocalized onto both carbon and oxygen sites.

Phenoxides are closely related to alkoxides, except the organic substitutent is a derivative of benzene. Phenol is more acidic than a typical alcohol, thus phenoxides are correspondingly less basic and less nucleophilic. They are however often easier to handle and yield derivatives that are more crystalline than the alkoxides.

Alkoxides can be produced by several routes starting from an alcohol. Highly reducing metals react directly with alcohols to give the corresponding metal alkoxide. The alcohol serves as an acid, and hydrogen is produced as a by-product. A classic case is sodium methoxide produced by the addition of sodium metal to methanol:

The tetrachloride of titanium reacts with alcohols to give the corresponding tetraalkoxides, concomitant with the evolution of hydrogen chloride:

The reaction can be accelerated by the addition of a base, such as a tertiary amine. Many other metal and main group halides can be used instead of titanium, for example SiCl4, ZrCl4, and PCl3.

Many alkoxides are prepared by salt-forming reactions from a metal chloride and sodium alkoxide:

Such reactions are favored by the lattice energy of the NaCl, and purification of the product alkoxide is simplified by the fact that NaCl is insoluble in common organic solvents.

Many alkoxides can be prepared by anodic dissolution of the corresponding metals in water-free alcohols in the presence of electroconductive additive. The metals may be Co, Ga, Ge, Hf, Fe, Ni, Nb, Mo, La, Re, Sc, Si, Ti, Ta, W, Y, Zr, etc. The conductive additive may be lithium chloride, quaternary ammonium halogenide, or other. Some examples of metal alkoxides obtained by this technique: Ti(OC3H7-iso)4, Nb2(OCH3)10, Ta2(OCH3)10, [MoO(OCH3)4]2, Re2O3(OCH3)6, Re4O6(OCH3)12, and Re4O6(OC3H7-iso)10.

Metal alkoxides hydrolyse with water according to the following equation:

where R is an organic substituent and L is an unspecified ligand (often an alkoxide) A well-studied case is the irreversible hydrolysis of titanium ethoxide:

By controlling the stoichiometry and steric properties of the alkoxide, such reactions can be arrested leading to metal-oxy-alkoxides, which usually are oligonuclear complexes. Other alcohols can be employed in place of water. In this way one alkoxide can be converted to another, and the process is properly referred to as alcoholysis (unfortunately, there is an issue of terminology confusion with transesterification, a different process - see below). The position of the equilibrium can be controlled by the acidity of the alcohol; for example phenols typically react with alkoxides to release alcohols, giving the corresponding phenoxide. More simply, the alcoholysis can be controlled by selectively evaporating the more volatile component. In this way, ethoxides can be converted to butoxides, since ethanol (b.p. 78 °C) is more volatile than butanol (b.p. 118 °C).

In the transesterification process, metal alkoxides react with esters to bring about an exchange of alkyl groups between metal alkoxide and ester. With the metal alkoxide complex in focus, the result is the same as for alcoholysis, namely the replacement of alkoxide ligands, but at the same time the alkyl groups of the ester are changed, which can also be the primary goal of the reaction. Sodium methoxide, for example, is commonly used for this purpose, a reaction that is relevant to the production of "bio-diesel."

Formation of polynuclear and heterometallic derivatives

Characteristically, transition metal alkoxides are polynuclear, that is they contain more than one metal. Alkoxides are sterically undemanding and highly basic ligands that tend to bridge metals.

Many metal alkoxides thermally decompose in the range ~100-300 °C. Depending on process conditions, this thermolysis can afford nanosized powders of oxide or metallic phases. This approach is a basis of processes of fabrication of functional materials intended for aircraft, space, electronic fields, and chemical industry: individual oxides, their solid solutions, complex oxides, powders of metals and alloys active towards sintering. Decomposition of mixtures of mono- and heterometallic alkoxide derivatives has also been examined. This method represents a prospective approach possessing an advantage of capability of obtaining functional materials with increased phase and chemical homogeneity and controllable grain size (including the preparation of nanosized materials) at relatively low temperature (less than 500-900°C) as compared with the conventional techniques. 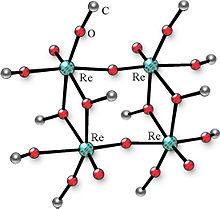