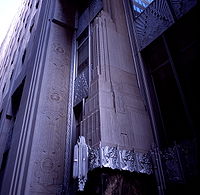 The American International Building is a 66-story, 952 foot (290 m) tall building[3] in Lower Manhattan in New York City. The official address is 70 Pine Street, New York, NY 10270 and is also bordered by Cedar Street and Pearl Street. It was completed in 1932 by the Cities Service Company[4] for the oil and gas baron Henry Latham Doherty.[5] This was during the New York skyscraper race, which accounts for its gothic-like spire-topped appearance,[6] a popular architectural style at that time. When completed it was the third tallest building in the world, after only the Empire State Building and the Chrysler Building.[6] It was the last skyscraper to be built in Lower Manhattan prior to World War II. It was the tallest building in Downtown Manhattan until the 1970s when the World Trade Center was completed. Upon the 9/11 Attacks, it regained the status of the tallest downtown building. It is currently the fifth tallest in New York City, after the Empire State Building, the Bank of America Tower, the Chrysler Building, and the New York Times Building, and the 16th tallest in the United States. As of 2006, it was the 39th tallest building in the world.[3] The building is usually referred to simply as American International. It was previously owned by Cities Service Company and called the Cities Service Building; Cities Service sold it to the American International Group (AIG) when moving company headquarters to Tulsa, Oklahoma. It is currently owned by AIG and used for that company's world headquarters, but a sale may be pending and AIG might vacate by the end of 2010.[7]

One of the most famous themes of the limestone-clad tower is a mountain with a snow cap. The building features an open air platform with an enclosed glass observatory above it on the 66th Floor,[5] offering a view of downtown from any building. This observatory, which was once public, is now accessible only to executives and employees of AIG. The tower was originally and famously built with double-decker elevators [4] that served two floors at a time to provide sufficient vertical service for the narrow tower and its limited elevator shafts. Soon afterwards, these elevators were removed because of their low popularity;[4] however, the Citigroup Center adopted this same idea in the 1970s.

The building appears at the end of the movie Spider-Man. However, it is depicted as being located in Midtown Manhattan instead of Lower Manhattan.

After AIG's collapse in 2008, 70 Pine St was eventually sold to developer Youngwoo & Associates in 2009. Plans include leasing the lower floors as office space and converting the upper floor to luxury condiminiums. The former Cities Service Building was designated a New York City Landmark and Interior Landmark in June 2011.[8]