The Chunghwa Post Co., Ltd. (Chinese: 中華郵政股份有限公司), formerly Taiwan Post Co. (台灣郵政), is the official postal service of the Republic of China (ROC), providing mail service for Taiwan Area of the Republic of China. It also provides a savings account service. Chunghwa Post was a government organization of Ministry of Transportation and Communications until 2003, when it was reorganized into a government-owned corporation. Its affiliation with the Universal Postal Union began in 1914, but ended in 1972 when it was replaced by the China Post shortly after China's seat in the United Nations was handed over to the People's Republic of China. Because of its non-UPU affiliation, domestic mail envelope and package labeling does not follow UPU standards.

International Reply Coupons are not available to Taiwan Area, and mail is not delivered to or sent directly from Taiwan Area, but rather routed through third-party countries, with Japan Post as a major route facility for incoming mail sent from the Americas region.[citation needed]

The direct ancestor of Chunghwa Post is the Customs Post Office of the Qing Empire, established in 1878 by Li Hongzhang at the suggestion of the foreign powers, with branch offices in five major trading cities. On 20 March 1896, the Customs Post Office became the Great Qing Post, which in 1911 became independent of the customs service.

In 1888, Liu Mingchuan, Qing Governor of Taiwan Province, established the Taiwan General Post Office of the Great Qing Postal service. However, in 1895, Taiwan was ceded by Qing Dynasty to Japan following the first Sino-Japanese war. The Taiwan GPO was abolished, with postal service in Taiwan conducted by a variety of bodies such as the Field Command postal service, and after 1924, the Letters Department of the Ministry of Transport. 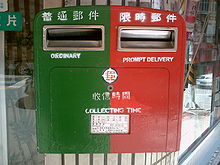 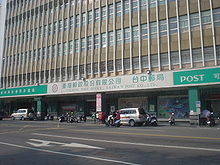 In February 2007, ROC President Chen Shui-bian announced that the name of the postal service would be officially changed to Taiwan Post, with sign changes occurring at branches in Taiwan on February 12. [2] Media reports noted that "Taiwan Post" was more consistent with the name Governor Liu Ming-chuan used when he founded the Taiwan Post Administration in 1888[citation needed]. Furthermore, Taiwan Post began printing "Taiwan" instead of "Republic of China" on postage stamps.

On February 9, the board of directors resolved to change the name of the corporation to Taiwan Post Co. (台灣郵政) after a delay of several hours due to protests from unions. [3] [4] However, a bill to recognise the change of law was blocked by the KMT-dominated legislature. As a result, the law still mandated the postal monopoly for "Chunghwa Post" despite the name change.

In 2008, the Kuomintang took power in Taiwan following a legislative election victory and the election of Ma Ying-jeou to the presidency. Following his election, Ma Ying-jeou publicly stated that he did not wish his inauguration commemoration stamps to be marked "Taiwan Post", because the name change was "illegal". [5] The postal service marked the inauguration stamps with Chinese characters for the "Republic of China", as well as "Republic of China (Taiwan)" in English.[6]

On 1 August 2008, the company resolved to reverse the name change and restored the name "Chunghwa Post".[7] The Board of Directors, as well as resolving to restore the name of the corporation, also resolved to re-hire the chief executive dismissed in 2007, and to withdraw defamation proceedings against him.[8]