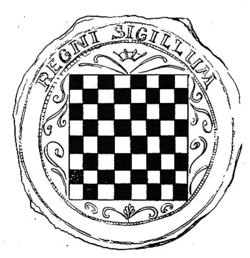 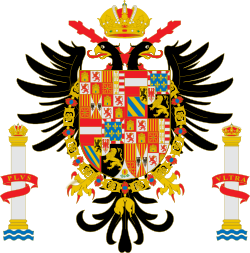 Coat of arms of the House of Habsburg at their height. The Habsburgs ruled the Kingdom of Croatia for just under 470 years, longer than any other dynasty

The details of the arrival of the Croats are scarcely documented. c. 626 Croats migrate from White Croatia (around what is now Galicia) at the invitation of Eastern Roman Emperor Heraclius. c. 641 – c. 689 Radoslav converts Croatia to Christianity.

Kings of Croatia of native line

In his letter from 925, Pope John X refers to Tomislav as Rex Chroatorum - King of Croatia. All Croatian rulers after Tomislav held the title of king.

From 1102, the reigning King of Hungary is ruler of Kingdom of Croatia-Slavonia and Dalmatia in agreement with the Croatian nobles.[2][3] Croatia is governed on his behalf by a Ban (viceroy) and a Sabor.

On January 1, 1527 Croatian Parliament, on its session in Cetin elected Ferdinand, Archduke of Austria as the new king of Croatia.

1941 - 1945: the Nazi-puppet Independent State of Croatia was formed by the Axis powers on occupied Yugoslav territory, and was ruled by the Ustaše party led by Ante Pavelić. In May 1941 this state was made a formal kingdom (by agreement between Ante Pavelić and Benito Mussolini). Italian Prince Aimone, Duke of Aosta was formally named as the king-designate under the name "Tomislav II", but refused to assume the kingship, was never crowned, never ruled, and formally abdicated in 1943.