From Here to Eternity

From Here to Eternity 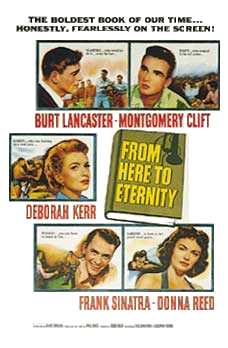 "From Here to Eternity" is a 1953 based on the novel of the same name by James Jones. It deals with the troubles of soldiers stationed on in the days just before the . The material of the rather explicit novel had to be considerably toned down to appease the censors of the time. For example, in the famous beach scene, it is less obvious that Deborah Kerr and Burt Lancaster's characters have actually been having sex than it is in the novel and the later, more frank 1979 miniseries based on the book.

Private Robert E. Lee Prewitt (Montgomery Clift) is transferred to on the island of . When Captain Dana Holmes (Philip Ober) learns of his reputation as a talented boxer, he pressures Prewitt to join the regimental boxing club that he heads, but the enlisted man stubbornly refuses. 1st Sergeant Milton Warden (Burt Lancaster) suggests that he try to get Prewitt to change his mind by making life as difficult as possible. He gets the other non-commissioned officers to help. Prewitt is supported only by his friend, Private Angelo Maggio (Frank Sinatra).

Behind his commander's back, Warden begins an affair with Holmes' neglected wife Karen (Deborah Kerr). As their relationship develops, she asks him to apply for officer training, so she can divorce Holmes and marry him. When he is finally forced to admit that he doesn't want to be an officer, she sadly ends the affair.

Meanwhile, Maggio antagonizes bigoted Sergeant James R. "Fatso" Judson (Ernest Borgnine). When the undisciplined Maggio goes , he is sentenced to the , under Judson's charge. Judson takes the opportunity to beat the defiant prisoner repeatedly. Maggio manages to escape and find Prewitt; he tells him of the abuse he endured, then dies. Prewitt finds Judson and kills him in revenge. He then goes into hiding in the apartment of Lorene (Donna Reed), a nightclub "hostess" with whom he had become acquainted.

When the Japanese attack Pearl Harbor, Prewitt tries to return to camp, but is shot dead by a sentry. At the end, Lorene and Karen meet on a ship leaving for the mainland. Lorene tells Karen that her fiancé was an air force pilot shot down in the attack, but Karen recognizes Prewitt's name.

The novel's author, James Jones, had a small, uncredited part.

Legend has it that Frank Sinatra got the role in the movie because of his alleged connections, and that this was the basis for a similar subplot in "", although, this has been dismissed on several occasions by the cast and crew of the film. Director Fred Zinneman commented that "The legend about a horse's head having been cut off is pure invention, a poetic license on the part of who wrote ""." [cite book |author=Nancy Sinatra |title=Frank Sinatra: An American Legend |publisher=Readers Digest Assn |location= |year=1995 |pages= |isbn=0-7621-0134-2 |oclc= |doi=] More plausible is the notion that Sinatra's then-wife persuaded studio head 's wife to use her influence with him; this version is related by in her Sinatra biography. Sinatra himself had been bombarding Cohn with letters and telegrams asking to play the ill-fated Maggio, even signing some of the letters "Maggio". Sinatra benefited when , who was originally cast as Maggio, dropped out to appear on Broadway instead. However, he was paid only $8,000, a huge drop from his $130,000 salary for "".

Sinatra's screen-test was used in the final cut of the film; the scene included Sinatra improvising with a handful of olives, pretending they were a pair of dice.

A rumor has been circulating for years that , who played Sgt. Maylon Stark, had his role drastically edited after preview audiences recognized him as TV's "". This is depicted in the "". However, Zinnemann maintains all his scenes were kept intact from the first draft, nor was there ever a preview screening.

The withheld its cooperation from the production (most of the movie was filmed where it was set, at , Hawaii) until the producers agreed to several modifications, most noticeably the fate of Captain Holmes. Numerous barracks locations are still intact and still occupied by active duty troops. In both the movie and the book the bar and restaurant called Choy's, where the fight scene takes place in the movie and where the novel opens is named Kemoo Farm, Choy's was chosen by James Jones in honor of Kemoo Farm's head chef. Kemoo Farm is still deeply associated with the adjacent Schofield Barracks and the cast and crew, especially Sinatra, are reputed to have patronized the bar to the point of excess.

Opening to rave reviews, "From Here to Eternity" proved to be an instant smash with critics and the public alike, with the likes of extolling: "A motion picture so great in its starkly realistic and appealing drama that mere words cannot justly describe it." "Variety" agreed, stating, " The James Jones bestseller, "From Here to Eternity," has become an outstanding motion picture in this smash screen adaptation. It is an important film from any angle, presenting socko entertainment for big business. The cast names are exceptionally good, the exploitation and word-of-mouth values are topnotch, and the prospects in all playdates are very bright whether special key bookings or general run."

Of the actors, "Variety" went on to say, " Burt Lancaster, whose presence adds measurably to the marquee weight of the strong cast names, wallops the character of Top Sergeant Milton Warden, the professional soldier who wetnurses a weak, pompous commanding officer and the Gis under him. It is a performance to which he gives depth of character as well as the muscles which had gained marquee importance for his name. Montgomery Clift, with a reputation for sensitive, three-dimensional performances, adds another to his growing list as the independent GI who refuses to join the company boxing team, taking instead the 'treatment' dished out at the c.o.'s instructions. Frank Sinatra scores a decided hit as Angelo Maggio, a violent, likeable Italo-American GI. While some may be amazed at this expression of the Sinatra talent versatility, it will come as no surprise to those who remember the few times he has had a chance to be something other than a crooner in films.

"" applauded Frank Sinatra, remarking that "He proves he is an actor by playing the luckless Maggio with a kind of doomed gaity that is both real and immensely touching." "" also stated that "Frank Sinatra, a crooner long since turned actor, knew what he was doing when he plugged for the role of Maggio."

The cast agreed, commenting in the book "" that "His fervour (Sinatra), his bitterness had something to do with the character of Maggio, but also with what he had gone through the last number of years. A sense of defeat and the whole world crashing in on him... They all came out in that performance."

With a gross of $30.5 million equating to earnings of $12.2 million, "From Here to Eternity" was not only one of the top grossing films of 1953, but one of the ten highest-grossing films of the decade. Adjusted for inflation, its box office gross would be equivalent to in excess of $240 million U.S. in recent times.

William Holden, who won the Best Actor Oscar for "", felt that Lancaster should have won for his portrayal of Sgt. Milt Warden. Sinatra would later comment that he thought his performance of heroin addict Frankie Machine in "" was more deserving of an Oscar than his role as Maggio.

In 2002, the United States deemed the film "culturally, historically, or aesthetically significant" and selected it for preservation in the .