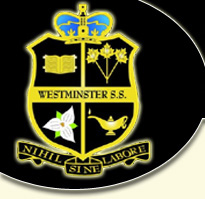 Westminster Secondary School is a public in London, , , at 230 Base Line Road West.

Westminster is administered by the . Approximately 1,000 students attend the school in South London, in grades nine to 12, plus a co-op program.

The school mascot is the wildcat. Westminster is known for the strength of its various programs, which include drama, visual arts, music, their award winning model United Nations club and basketball.