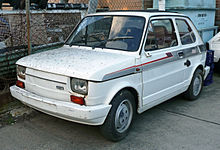 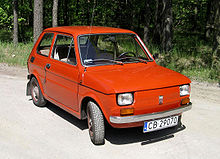 The Fiat 126 is a city car introduced in October 1972 at the Turin Auto Show[1] as a replacement for the Fiat 500. Most were produced in Bielsko-Biała, Poland as the Polski Fiat 126p until 2000. It was replaced by the front-engined Fiat Cinquecento in 1993.

The 126 used much of the same mechanical underpinnings and layout as its Fiat 500 rear-engined predecessor with which it shared its wheelbase, but featured an all new bodyshell closely resembling a scaled-down Fiat 127.

In Italy, the car was produced in the plants of Cassino and Termini Imerese until 1979. By this time 1,352,912 of the cars had been produced in Italy.

The car continued however to be manufactured by FSM in Poland, where it was produced from 1973 to 2000 as the Polski Fiat 126p. Even after the introduction of the 126 Bis (a 126p with water-cooled engine of indigenous Polish construction), the original model continued to be produced for the Polish market. The car was also produced under licence by Zastava in Yugoslavia. In 1984, the 126 received a facelift, giving it plastic bumpers (for all versions) and a new dashboard. This model named Fiat 126p FL. In 1994, the 126p received another facelift, and some parts from the Fiat Cinquecento, this version was named 126 EL. The 126 ELX introduced a catalytic converter.

The car was produced in Poland under the brand Polski Fiat 126p (literally in English: Polish Fiat 126p) between 1973 and 2000. At first it was almost identical with the basic model: differences included a higher chassis, a modified grille on the back, and the front blinkers that were white in Italy but orange for other markets. To distinguish it from the original Italian car, the letter "p" was added to its name. It was produced by Fabryka Samochodów Małolitrażowych (FSM) in Bielsko-Biała and Tychy under Italian Fiat licence. Due to a relatively low price it was very popular in Poland and was arguably the most popular car there in the 1980s. Its very small size gave it the nickname Maluch ("the small one","small child", pronounced [ˈmalux]). The nickname became so popular that in 1997 it was accepted by the producer as the official name of the car.

It was exported to many Eastern Bloc countries and for several years it was one of the most popular cars in Poland and in Hungary as well. It also found market success in Australia between 1989 and 1992, under the name FSM Niki. During that period it was Australia's cheapest car.[4]

The PF 126p has special meaning for Poles and its story had a connection with Polish politics during the communist period (Polish People's Republic, up to 1989). In a communist system, a private car was considered a luxury good, due to limited availability and low salaries. In 1971 there were only 556,000 passenger cars in Poland.[6] In a socialist planned economy, decisions on whether a state-owned factory could produce a car were taken on political and not just economic grounds. The authorities themselves initially did not find the idea of private cars attractive. The first relatively cheap Polish car was the Syrena, but its production was limited. Limited numbers of cars were also imported from other Eastern Bloc countries. It was difficult to buy a foreign car because the Polish złoty, like other currencies in communist states, was not convertible to western funds and there was no free market in the country. The PF 126p was supposed to be the first real, popular and affordable car, to motorize ordinary families. The licence was bought after the rise to power of a new communist party leader, Edward Gierek, who wanted to gain popular favour by increasing consumption after the Spartan period under Władysław Gomułka. Despite the fact that it was a very small city car, it was the only choice for most families, playing the role of a family car. During holidays, it was common to see four-person families driving PF-126s abroad with huge suitcases on a roof rack; sightings of PF-126s towing a small Niewiadów N126 caravan specially designed for the PF 126 were also occasionally reported. PF 126p production, however, was not sufficient and the PF 126p was distributed through a waiting list. Often families had to wait a couple of years to buy a car. A coupon for a car could also be given by the authorities based on merit.

In Poland it is called Maluch, which literally means "small one" or toddler,[7] as well as mały Fiat ("small Fiat"), in contrast to Fiat 125p, called duży Fiat ("big Fiat").[8] In some regions, it is also called Kaszlak[9] litteraly "cougher" (derived from kaszel meaning "cough", as its engine's sound resembles a cough when it is started).

In Albania it is known as Kikirez.[citation needed]

In Serbo-Croatian it is known as Peglica (meaning "little iron").[10]

In Slovene the 126 is also called Bolha ("flea"),[11] Piči-poki (loosely translated as "fast-and-loud") or Kalimero on Slovenian coast after a cartoon character Calimero.[citation needed]

In Hungarian, it is known as kispolszki ("little Polish", while the 125p is the nagypolszki, meaning "big Polish"), kispolák ("little Pole") or törpe-polyák ("dwarf Pole"); also, the car was nicknamed egérkamion, meaning "a mouse's truck".[citation needed]

In Germany the Fiat 126 was known as the Bambino, the Italian word for child.[12]

In Cuba it is known as "Polaquito" and in Chile as "Bototo".[citation needed]