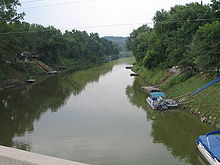 Nodaway River just before the confluence with the Missouri River at Nodaway, Missouri 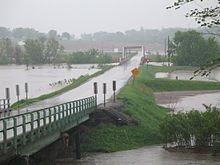 Nodaway River at Skidmore, Missouri during the May 2007 Flood

The river's name (as "Nodawa") first appears in the journal of Lewis and Clark, who camped at the mouth of the river on July 8, 1804,[2] but who provide no derivation of the name. There exist several proposed etymologies. The most probable is that it comes from an Algonquian term for the Sioux[2][3] (such as Ojibwe naadowe),[4] derived from a Proto-Algonquian name *naːtoweːwa, "speaker of a foreign language" (though sometimes claimed to mean "snake").[5][6] The name could also be from a Dakota Sioux word meaning "crossed without a canoe".[7]

Lewis and Clark liked the spot enough that they recommended it for the winter headquarters of Astor Expedition of 1810-1812 that discovered the South Pass in Wyoming through which hundreds of settlers on the Oregon Trail, California Trail, Mormon Trail were to pass.

The river is navigable only by shallow fishing and row boats although steam ships navigated just inside its mouth. The river was the primary route for white settlers including Amos Graham and Isaac Hogan following the Platte Purchase of 1836 which opened northwest Missouri for settlement. Nodaway County, which derives its name from the river, was by far the biggest county in the purchase and the fourth largest in the state of Missouri.

Elevations in the Nodaway system range from just under 1,400 feet (430 m) above sea level at the source of the Middle Nodaway, to 950 feet (290 m) at the beginning of the main stem, to 800 feet (240 m) at its mouth on the Missouri River in Nodaway, Missouri in Andrew County, Missouri.

The Platte River basin is to the east and the Grand River and Des Moines River basins to the northeast, with the latter defining the boundary between the Missouri River and Mississippi River basins. The west side is bound by the Tarkio River basin and in the northwest by the Nishnabotna River basin.

The Nodaway River basin is prone to extensive flooding and can contribute as much as 20% of the flood crest of the Missouri River near its mouth.