The Stench of Redemption

The Stench of Redemption 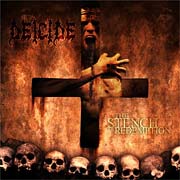 "The Stench of Redemption" is the eighth studio album by Deicide. It is the first album by the band to feature (formerly of ) and (formerly of ) on guitars. Two tracks were released exclusively via iTunes on , (note: 6/6/6). The tracks are "Homage for Satan" and "Crucified for Innocence." Deicide decided to release the "digital EP" via the internet because of financial problems that the band and had. The band has also canceled some of their gigs because of the money problems. As with albums before it, the disc features themes of destruction and anti-Christianity.

This is the first Deicide album have writing credits attributed to individual band members. All the music is written by and all the lyrics by , although and are given credit for "additional arrangements, harmonies & themes."

Many critics have praised this album as a return to form for Deicide, despite the band losing both Eric and Brian Hoffman, the two founding members. There is a noticeable change in the guitar work, as guitar leads are much more prevalent and sometimes even reach epic proportions (a good example being the closing cut, "The Lord's Sedition", which is not only the longest Deicide song to date, but also notable for the moody, dark, clean guitar intro). The style of the solos on the album is also drastically different than it has been on previous Deicide records. Ralph Santolla and Jack Owen utilize a style of guitar soloing along with the traditional riffing of Deicide. Many fans have also noticed Glen's trademark double-tracked vocal style sounds better than it has in years.

Some editions of the album include a cover of Black Night by , with rewritten lyrics by .

It is interesting to note that a passage of the song "The Lord's Sedition" is identitical to a section of the score from the movie Barb Wire.

Comments on the album

"I'd have to say "stench" is definitely my favorite and the one I'm most proud of, Glen too I think. It really all came together on this one, the material, the players, the sound, the vibe... It was a real pleasure doing this record with this line-up, almost effortless."- Steve Asheim [ [http://www.metalstorm.ee/pub/interview.php?interview_id=380 Deicide interview (06/2006) - Metal Storm ] ]

"the best Deicide album since “Legion” and in many ways it is even better than that one." "Benton sounds really pissed off again instead of just running through the motions, Steve Asheim’s drumming is blisteringly fast, while newcomers Jack Owen and Ralph Santolla inject some much-needed dynamism and oomph into the unit." "all that needs to be said is that these songs are the best, heaviest, most melodic (subtly) and blood-curdling from the band in many, many years." "after just one listen this new offering gave me a swift blow to the head and demanded my attention. Everything you’ve ever wanted (back) in Deicide is present here in spades, as well as some new but very welcome elements (primarily due to the new axe-duo, that kicks the living hell out of anything the Hoffman’s could ever muster), like technical riffing, very Heavy Metal-like solos and a renewed sense of urgency and energy." "this is a band re-discovering their balls and the result is one of the best albums of the year by the most improved band of the year." "Now excuse me while I finish scraping my eardrums off the walls and my jaw off the floor…"- The Metal Observer (Source: http://www.metal-observer.com/articles.php?lid=1&sid=1&id=11070)

"one of the greatest Death Metal albums of the present days." "one of the most intense experiences in modern metal; every single track has a life of its own due to the outstanding songwriting presented, every chord played, every tone reached and every solo completed shows a polished band to the core, Death Metal in its shocking best that's for sure." "This new line-up could be the dream-team of Death Metal" "This album is surely a masterpiece and it will surely become a classic record in the future" "I highly recommend this album, DO NOT miss this release." (Overall Rating: 9.6/10)- The Metal Storm [ [http://www.metalstorm.ee/bands/album.php?album_id=4969&band_id=84&bandname=Deicide Deicide - The Stench Of Redemption - Metal Storm ] ]

All Music Written By Steve Asheim. All Lyrics Written By Glen Benton. Published By Earache Music.